It was the end of 2014 when the future founders of Crystal Pistol Records realized they might never get their music released.

The two men, Justin Black and Pete Curry, had become good friends after playing local shows with some of the same bands. They were spending a lot of time together comparing notes on their personal attempts to release music.

“Both of us had been sending stuff to labels,” remembered Black, who is now known more commonly around the Richmond music community as Saw Black. “That’s what you do, from the first time you make any recordings. ‘Oh this is awesome, there are so many labels that would love to have this!’ Which isn’t true. You send it to all these people and never get a response. We [asked] ‘Why are we doing this?’”

That willingness to rethink their efforts completely would become the foundation of their work together. “We were starting to feel like we had to do something to have agency over ourselves,” Curry said. “To create some kind of institution. ‘We’ll sign ourselves.’”

Or as Black put it, “I’ll put out your record, you put out my record.” If the labels wouldn’t talk to them, they’d build their own.

In less than three years, Curry and Black have come from that blank slate conversation to build a label that keeps putting out albums. They’ve made vinyl, CDs, and cassettes. They’ve worked with bands in genres ranging from the thrash punk of the You Go Girls and the surf rock of Death Birds Surf Club to the Appalachian Dixieland of Dharma Bombs. And they’ve done it all while writing, recording, and releasing their own music.

They attribute their hard work as musicians to their success with the label. “Maybe people trust us because they know we’re constantly busy working on our own music,” Curry said, contrasting them with better-funded operations focused on profits and money. “Both of us are working really hard on our own music constantly, and trying to do what we can for our friends and people who ask us for help.”

I recently sat down for a conversation with Black and Curry at The Paulie, a Philly-style sandwich pop-up serving weekday lunches out of Comfort on Broad Street. It was fitting fare, given that Curry hails from the Philadelphia area and lived in that city before moving to Richmond to study music at VCU.

Curry’s full-length album, Advice on Love, was Crystal Pistol’s first release. It was a risky opening salvo, given the decision to spend most of their budget on vinyl over marketing. “We could have released it on Bandcamp and Spotify and dumped all that money into a PR campaign,” Curry said. “Maybe we would be somewhere else entirely, but that’s not how we did it. We were really serious about it. We were pooling money, we were working extra one-off jobs together just to make this thing happen because we wanted to make a big splash and [say] ‘Here we are. We’re Crystal Pistol Records.’”

Ten months of planning ended with an October 2015 release. Curry remembered the thrill when the physical records arrived. “This huge freight truck pulls up outside of my house on Pine Street and unloads this enormous pallet of boxes onto my sidewalk. It was wild. I was really excited. And we sold a lot of them right away, mostly in Richmond… I remember I sent one to France one time. I had no idea why, or how they heard about it.”

The release was foundational in more than one way, as brainstorming for the album’s cover art led to the label’s instantly recognizable logo. While Black is typically more involved with layouts for Crystal Pistol releases, leveraging his time studying art at UVA, it was Curry who first outlined the insignia.

“[Black] had this idea of me in a leather jacket somewhere, and he [said] ‘Maybe you’ve got an emblem with a crystal on it, or something like that.’ I went home and drew it, and that was the first and only idea. We scanned it, and it’s been interesting. We’ve made hats and shirts, and I see them [on] our friends who have supported us… It’s fun that we matter to people enough that they want to be wearing that around.”

The logo recently made an appearance onstage at the Carpenter Theatre, thanks to Clair Morgan bassist Shannon Cleary’s hat and the Richmond Symphony’s “RVA Live!” pops concert. It also graced the torso of singer-songwriter and comic book artist Jeffrey Lewis at a show he and Black shared in New York City. “I gave him a shirt,” Black recalled, “and [he said] ‘This is awesome!’ And he’s an illustrator. He took off his shirt immediately and put it on and played a set with the shirt on. That was really cool. I ran into him six months later, and he [said] ‘Dude, thanks so much for that shirt! I love that shirt!’”

That kind of enthusiasm is music to the Crystal Pistol founders’ ears, given their drive to build awareness around what they have to offer. “We’re not pulling in a ton of money right now,” Black confessed, “but we are building what I think is a really good brand. Our goal is not to sell out or anything, but I feel like a lot of our value is in the logo. And the attitude, and the people we put out, and the word of mouth.” 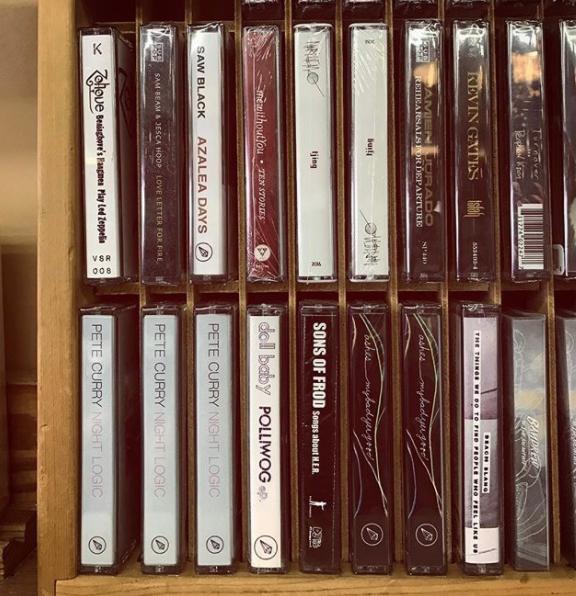 Word spread so quickly that Black had to delay his own release, an ironic twist considering it was part of the motivation to start the label. That release, the excellent autumnal Azalea Days LP, came out last February as the eleventh album from Crystal Pistols. Black’s willingness to set aside his own music shows just how deeply he and Curry have committed to the approach that led to the label. 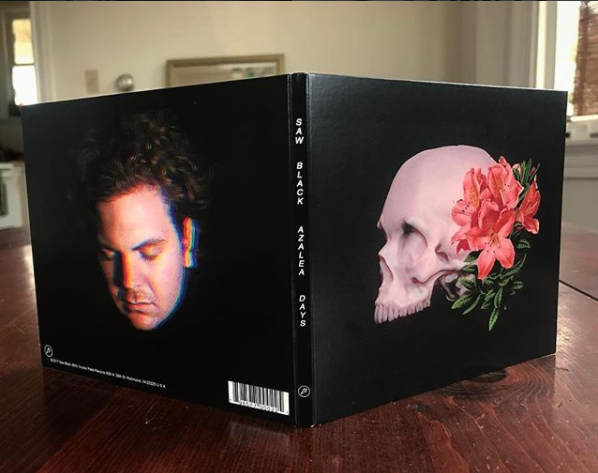 In practice, it starts with big-picture questions. “What is this, really? Where does it belong? Is this a demo, or is a bedroom lo-fi pop classic? Is this the masterpiece? Can these things be rereleased?” said Curry, giving some examples.

Black pointed to The Nude Party as representative of the latter. “It’s cool to be able to prop bands up [who] then go to another label. A band that we put out very early on was The Nude Party. They were originally from Boone [North Carolina]. We put out their first tape. And now they’re about to sign to a really big Nashville label, and they’re full-time professional touring artists now, living in Upstate New York.”

The flexibility extends to the recording process too. Black has an 8-track tape recording setup in his basement, providing an economical option for bands who want to make a long player on a short budget.

That’s the approach Death Birds Surf Club took when they tracked Transmission of Stoke, released digitally and on cassette at the start of 2017. It’s also how Dharma Bombs laid down their Bird Dog Basement Tapes EP, to which Black lent his hand as producer. The EP sold more than 500 copies, and for the full-length that followed, Old Time Romance, the group tracked at Montrose Recording Studio, keeping Black on as producer.

“They’re a great example of [how] we’re not a genre label,” Black pointed out. “We just like people that — first and foremost — we’re friends with and want to hang out with, but also that write good songs. Dharma Bombs have been really killing it in their own way. They played FloydFest last year, they’re playing FloydFest this year. They’re doing really well in this niche, in their own world.”

Valuing a group’s unique strengths is at the core of the Crystal Pistol model. DIY artists have more tools at their disposal than ever, and while that’s clearly a net positive, the ability to do everything alone tempts musicians to become generalists.

“Somebody made this post [that said] it’s possible to misconstrue what DIY means,” Curry recounted. “The ‘Yourself’ part — it should really be thought of as ‘Do It Yourselves.’ You have to have a network of people.”

“If somebody’s a really fucking good songwriter,” Black asserted, “they don’t need to know how to do Photoshop layouts. It should be enough, I think, to write badass songs. You shouldn’t have to know how to do 30 different things to release something. That’s why big labels have art directors and professional photographers and really nice printing houses. So we’re trying to fill that gap for people.”

By working within each band’s means, the Crystal Pistol model folds budgeting into the creative process, allowing artists to truly be themselves. When asked about advice for artists just starting out, one of Black’s recommendations was “following who you are, even if that is embarrassing or something.” The label’s reactivity means each release takes shape as naturally as possible, like liquid taking the form of whatever it’s poured into. Black called it the “local, micro-label level.”

“We can’t offer bands a budget, and, to be honest, a lot of bands aren’t ready,” he said. “If you sign to a big label, they’re giving you a $10,000 advance or something, right? That’s not free money. You’re not going to get paid until they make that money back. A lot of bands that we work with — they don’t want to be in debt to a label. You kind of come to this new model: Let’s just try to both be square when it comes out. Nobody’s owed any money.”

What’s remarkable is that the label has stayed out of debt while continuing to grow. The coming year promises to be a busy one, starting with Saw Black’s sophomore full-length due out in February; followed with an album by Harrisonburg’s Dogwood Tales, with whom Black plans to hit the road. And they’re projecting a big year for Wester Green, whose dreamily layered debut Black Creek LP, released on cassette in November, helped close out Crystal Pistol’s productive 2017.

“All of our artists are coming up, they’re starting to have budgets, starting to have higher profiles. I’ve started touring a lot, [and] I’ve built a lot of out-of-town connections that way,” Black said. “We’re trying to be homegrown and grow at a steady and realistic pace, and ideally one day be able to operate more and more as a full-time business.”

One area they’ve targeted for expansion is their media offerings. They’ve gained part of their following from their music videos, which grew like the label, from a small experiment into mature, highly anticipated works.

Still, even when looking at goals for the future, they recognize that adaptability is key. “We can’t operate like a big label — but at the same time, big labels are wishing they didn’t have to operate the way that they are,” Black said. “We’re still trying to figure a lot of things out, but I think the further we get into it, the more we realize that’s kind of what everybody’s doing.”