When the 45th President of the United States says that it is a “very scary time for young men in America,” he is blatantly discounting the fact that it is always a very scary time for women – young and old – in America. I have more than 100 students in my anthropology classes this semester, and the reality is that nearly 25 percent of them will experience sexual violence before they graduate.

In the general population, 1 out of every 6 women will survive rape or attempted rape. LGBTQ women experience sexual violence at an even higher rate; more than half of transgender women of color will survive sexual assault during a lifetime that will be, on average, only 35 years long. The RAINN (Rape, Abuse & Incest National Network) website reports in large, dominating letters that every 98 seconds, another American is sexually assaulted.

In a culture where sexual violence against women is this pervasive (and embedded in places like the high schools of potential U.S. Supreme Court members), it doesn’t matter if these women are our daughters, sisters, or wives: it matters that being a woman – any woman – comes with a very real, very tangible risk.

A risk that is not just “scary,” but one that shapes our lives.

Most of us don’t remember where or when we picked up certain tricks, but many of us carry our keys between our fingers in case we need to defend ourselves while walking to the car. We’ve learned somewhere along the way to look under our cars and in the back seats before we get in; we rarely, if ever, get in an elevator by ourselves with a man or group of men we don’t know. We have all, at some point, called a friend on a walk home so that someone knows where we are, and listens with us for danger as we walk alone.

These are ways that, every day, every woman in America acknowledges and mitigates – as best we can – the risk of sexual violence we face simply for being women.

Ways that men mitigate the risk of sexual violence? They don’t, because for the most part, they don’t have to. Scary, indeed.

Years ago, when I first started teaching at VCU, one of my undergrads asked me to sign a pledge to Start by Believing. At the time, it didn’t seem all that profound to me: it seemed logical pledging to simply believe women when they reported surviving sexual violence. But since then, as students have come through my classes, I’ve found myself in more than one situation looking in tear-filled eyes and saying, before all other things, “I believe you.” And each time I say it, the reality becomes more stark: despite statistics that clearly show women in America are at risk, the default seems to be that when they report their experiences, they are questioned and ultimately doubted.

Patriarchy is a deep and profound thing.

The net result of this doubt is that only 20 percent of undergraduate survivors report their assaults. For non-student survivors, nearly 2 out of every 3 assaults go unreported. Their reasons? Fear of retaliation from the perpetrator, and law enforcement’s disinterest or inability to help.

And what we watched, as Dr. Christine Blasey Ford testified before the Senate Judicial Committee, is this same tragedy playing out in a very national and public way. 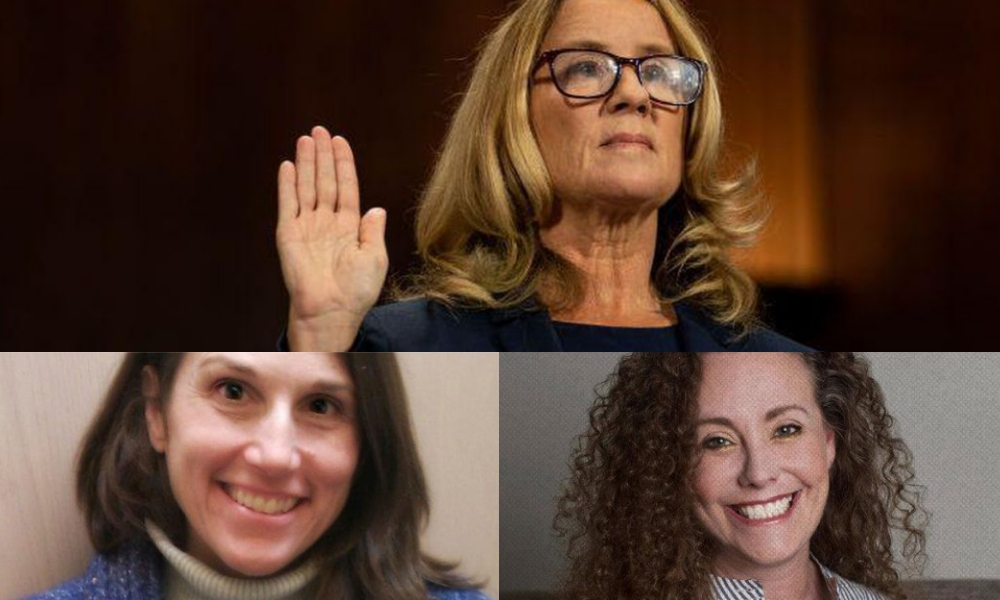 For those who think college kids or millennials today aren’t engaged in a national conversation, I counter with this: students listened on their phones to Dr. Ford’s testimony in the hallway between classes, and asked me to finish lecturing early so we could watch together as a class. They gathered in a conference room on campus to watch the hearing with allies. They turned to each other, turned to me, and said, “I believe her.”

Her reasons for not coming forward were questioned by the leader of our country in a tweet on September 21: “I have no doubt that, if the attack on Dr. Ford was as bad as she says, charges would have been immediately filed with local Law Enforcement Authorities by either her or her loving parents. I ask that she bring those filings forward so that we can learn date, time, and place!”

The resulting stories from survivors use the hashtag #WhyIDidntReport. They are swift, profound, and brutal. During her testimony and in the following days, RAINN saw a 338% increase in traffic on their sexual assault hotline. This is evidence, according to RAINN president Scott Berkowitz, that Dr. Ford’s “story has clearly resonated with survivors, and has led thousands to reach out for help for the first time.”

The President would like us to focus on the fear of false accusations, or on criminalization of the “boys will be boys” mentality. But statistics tell us that of all assaults reported, only 2% are found to be false. The President – accused of sexual violence by more than a dozen women – has also mocked Dr. Ford and her testimony, which fuels the belief of women across the country that our experiences do not matter. It fuels the belief that, even in raising our voices to the most prominent leaders of our country, we will not be heard.

Dr. Ford has likely spent her entire academic career being talked over by male colleagues, so in that sense, the hearing was nothing new. Having young women look to her as a role model is likely not new either.

The conversation we are seeing on the national stage – of a smart, credible, accomplished woman being mocked by the president for reporting her sexual assault – is being heard by every woman in the country.

It’s heard by women who may think to themselves, “If a professor of psychology isn’t believed, why would anyone believe me?” It’s heard by more women who have kept their assaults quiet for decades, and by women who do not remember all the details – and one result could be that all of these women see the writing on the wall, and simply continue to say nothing.

Yet, by speaking out, Dr. Ford has done something for women in this country that we perhaps didn’t know we needed. In this moment, women are finding voices that they didn’t know they had, courage from places deeply buried. Another American will be sexually assaulted every 98 seconds until we, as a country, dismantle the power structure and language that believes the accused over the survivors. Starting, sadly, at the very top.

I believe you. And if you are a survivor of sexual violence, I encourage you to call RAINN’s National Sexual Assault Hotline at 1-800-656-4673.

When you hear the word collage, most likely images are brought up of newspaper clippings, old Elmer’s Glue, and a ton of glitter that will never leave you. Emerging Richmond mixed-media artist Blythe King instead is taking collage work and photography to a new level by incorporating such elements as gold leaf, circle motifs, and pages from catalogs from the 40s, 70s, and 80s.

In her newest exhibit Two Sides of the Same Coin, which recently opened at Quirk Gallery, King uses her unique collage style to not only examine the female form, but also to lift it up and praise it. Taking a cue from her influence Andy Warhol, the Pittsburgh native pulls commercial images of women from old Montgomery Ward catalogs of the 40s, 70s, 80s and brings them to life with elements of Eastern iconography.  Feeling inspired by the unique level of empowerment felt from these images, she raises them to their goddess level by enshrining them in beautiful gold leaf.

Flipping through a 1940s catalog one day was what sparked the idea for these collages for this avid collector.

“I spend a lot of time looking through images, and I have a huge collection of catalogs,” King said.  “I found this catalog in my neighborhood, I brought it home, and I was just fascinated by it. It was the first time that I had seen women depicted [with this] dignity and strength to their poses that I hadn’t seen before in advertising. So I kind of felt like I uncovered this little blip of time and it felt like I needed to show people these images, they need to be seen again.”

King is also originally drawn to collage work because of its inherent double meaning, the familiarity, and the accessibility. She uses the foundation of these recognizable, commercial images to lure in audiences. Much like the multiple layers of the collage work are complex, as is the multiple layers of the women in question that she chooses to focus on.

While it is hard to deny that King’s work is of course visually and aesthetically striking, it is also out with a not so undercover mission. As society enters deeper into a stronger, more unified and intersectional renaissance of feminism, King uses her art to support the cause and unify all women in today’s stormy climates.

“I feel like I have a mission. My work is especially urgent right now. It’s finally a point in history where we are no longer tolerating violence against women. Women’s voices are being heard,” King said. “I feel that it’s even more important that I continue this work and make this work, and allow people to see it.”

King, who studied religion and art at the University of Richmond, has exhibited in South Carolina, Georgia, Illinois, Pennsylvania, Massachusetts, Virginia, and DC. Prior to delving into collage work, the mixed media artist produced tablet covers from vintage women’s shirts for her Louisiana-based online textile startup, iSockits. However, as some things naturally do, when the business found its end almost like clockwork, she ran across the first catalog that would inspire her series.

“I didn’t have a focus then. It was something that I did. That business, I did everything so it was pretty all consuming. The business sort of ran its course and it was about that time that I found that catalog in my neighborhood in Church Hill, and it got me thinking.”

While lifting women’s voices up is her aim, King admits that it may not be initially obvious when audiences first see her work. Because the medium is not always so obvious, she admits that sometimes the perception is different depending on what medium audiences think it is. However, she does have a large hope of what audiences will take away from her art.

“My biggest goal through my art is that it affects our culture, that it actually changes the way people see, so that actually has an effect on a larger scale. I feel like if you would understand that all women are gods that that will change the status of women in our culture. And you can do it through just one person at a time,” King said.

In addition to the Two Sides of the Same Coin exhibit, King is also working on a book about her artwork, which she hopes to have ready by the summer. The book will feature all of the pieces showcased in the then exhibition, which you can check out at Quirk Gallery through May 6.