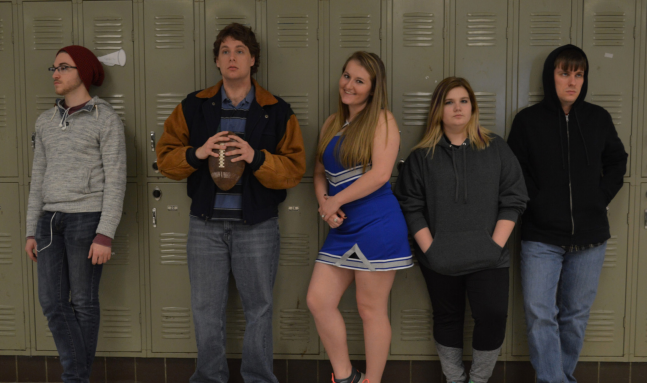 Bullying and feelings of depression affect nearly every high school student at some point during their four years and the two continue to be big issues in our country that are too often swept under the rug.

The Center for Diseases Control and Prevention reports that 20% of U.S. students in grades 9–12 experienced bullying at some point during their time in high school. Beyond that, more than one in every 10 high school students reported having attempted suicide according to the Youth Suicide Prevention Program.

It took two students taking their own lives as a result of suffering from these issues at Appomattox County High School last year for fellow student Kolby Grimsley to realize something needed to be done.

Grimsley is the executive producer behind “Hurt” a film that follows five high school students all battling inner struggles of some kind and sheds light on bullying, depression, suicide and school violence. The film will be screened at The Byrd Theatre this weekend.

Benjamin Brown is the founder of Bentrospection Productions, the film company behind “Hurt.” Brown directed and produced the film, and shed some light on the central themes.

“It focuses on the events leading up to a high school shooting,” he said. “You meet each of the characters individually and what their lives outside of school are like.”

Each of the actors is meant to represent a different stereotype in a high school, including the cheerleader, the jock, the artistic social recluse, the “gothic” kid and the bully. “Hurt” centers around their lives and touches on that outside appearances don’t always portray a realistic picture of what’s really going on in someone’s life.
.
“Eli, the artistic kid, is taking care of his ill grandmother,” he said. “With the football player Dan, the least likely person that people would expect, he’s the star football player his dad is the coach, but what we see if he’s struggling with expectations from his father, but also his personal expectations for himself.”

And even though the movie centers around a high school shooting, Brown said they made a conscious decision to not show actual guns or a shooting as to not take away from the film’s message.

“We’re not focusing on the gun violence itself there’s no actual shooting you see, we open on the day of the shooting and end on it,” he said. “Once you do that you take the emphasis off of what the story is about. Whether or not we have someone shoot someone or kill themselves is not the important aspect of the film. Instead we merely set the stage for that, but now we’re going to look at why that might happen.”

Brown wanted to get involved with the project after talking with Grimsley, currently a senior at Appomattox County High School, about the project.

“I know her from a project she was doing around the Farmville area, after this happened she wanted to do something impactful for her community so she decided to make a film,” Brown said. “She approached me and I agreed to help her.”

The entire film was shot at Appomattox County High School and most of the actors are current or former students there including Grimsley plays the cheerleader in the story. Brown said they started work on the film back in November and finished the film in eight days.

In that short time, Brown said the process turned into more than just shooting a film.

“I began to realize it was more than just a concept of making a film because everybody that showed up had some experience and gone through depression or bullying or losing a loved one because of these issues,” he said. “It became a real mentorship. At the same time we’re making the story we’re teaching these younger kids how to make films.”

The goal of the producers was to start an ongoing conversation about these issues and mental and emotional health to help those going through similar situations and help those who haven’t experienced this, get a better understanding of what their peers could be going through.

“The reason things go under the radar is there’s a sheer lack of discussion making these issues taboo, a lot of depression goes unnoticed because people don’t want to say they’re depressed so they mask it, this is exactly why these stereotypes aren’t associated with acts of violence.” “Showing it in an artistic context allows people to open up and makes it okay.”

“Hurt” will premiere at The Byrd Theatre Sunday, April 24th at 1:30 pm, followed by a Q&A then end with a meet up at Baja Bean. The film company will be accepting donations which will go the American Foundation for Suicide Prevention.