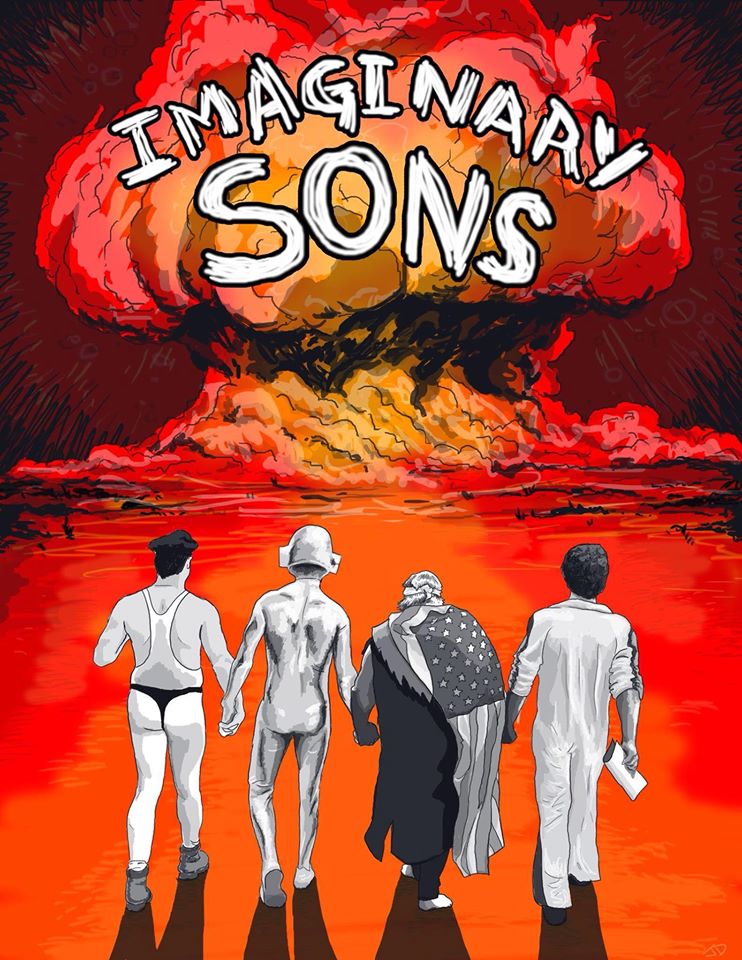 There’s a longstanding tradition in rock’n’roll of dressing up and taking on a persona while performing.

There’s a longstanding tradition in rock’n’roll of dressing up and taking on a persona while performing. Local foursome Imaginary Sons follows this trend but delves deeper into it, creating characters with complex backstories to inhabit onstage.

This Saturday at The Camel the group will screen the first installment of their video series, Imaginary Sons: Days of Future Origins Past, and it hopes to give folks a chance to learn more about the band’s fictional lives.

The idea of creating these characters was more or less a happy accident which happened after the group took a trip to Diversity Thrift to pick up dresses for their first show. As guitarist Mike Cruz, drummer Russell Redmond, bassist Kyle Hermann, and guitarist/vocalist Tommy Crisafulli looked for outfits something unexpected happened.

“I can’t remember if it was [Redmond] or [Hermann] who came around the corner with these onesies and they were like ‘I found some onesies guys!’,” said Cruz. “We put them on and there were people in the store and [Crisafulli] comes out of the dressing room with that unitard on and they’re just cracking up and [Crisafulli] just straight faced was like ‘What? Does this make me look fat?”

“And we decided to all wear them, and to keep wearing them because they’re funny,” said Redmond.

What was initially going to be a one-time-thing soon took on a life of its own as the group began to take to their costumes, adding on to them the more they performed, eventually creating full-fledged characters with extensive lore and unique looks.

“Our guitar player [Cruz] wears an old Elvis impersonator costume. I wear a silver/metallic skinsuit with a silver space helmet. The bassist [Hermann] wears a white leotard and a black thong and a police hat. And our lead singer [Crisafulli] wears a Dickies work onesie with an American flag cape,” said Redmond. “Over time we just developed these personas that we made up.”

“We traveled through time and space to form the best rock band that ever lived,” said Crisafulli.

Once a month, starting this Saturday, April 25th, the group will screen a short film at The Camel which spotlights on their characters– Spaceman Jones, The Rat King, Mexican Elvis, and The Officer — and how they came to be a part of Imaginary Sons.

First up is Redmond’s Spaceman Jones.

“Spaceman Jones is an alien from the planet Sploffzan,” said Redmond. “In the future on planet Sploffzan there is no creative music or original thought. Everyone has been brainwashed by some person you’ll have to attend to the show to find out who [it is].”

“We all grew up making silly videos in high school. [Crisafulli] has been working with Dod, [Redmond] and I have a video series that we did for a while,” said Hermann. “I think, as a band, we try to connect to our audience not only aurally but visually and interactively. We like to bring a lot of visual stimulation as well as sound.”

“We want to entertain the audience, keep them stimulated so we do that any way possible and it just made sense for us to branch out to film,” said Redmond.

“Just making a story was the best part about it,” said Cruz. “Just sitting around with the ideas. We’re very excited to bring this to everyone, it’s gonna be a lot of fun.”

In July, after the video series ends the group will leave on their first out of state tour in support of their album Let it Beer, which was released in January. However, the band is also already working on new music and hopes to have a new album recorded soon.

“This is a new adventure, we’ve got new music,” said Crisafulli.

The first of their video series premieres this Saturday at The Camel and will also feature performances from Dalton Dash, Nicky C and the RSB, and Devon Hammer. Tickets are $7 at the door and can be bought in advance here.