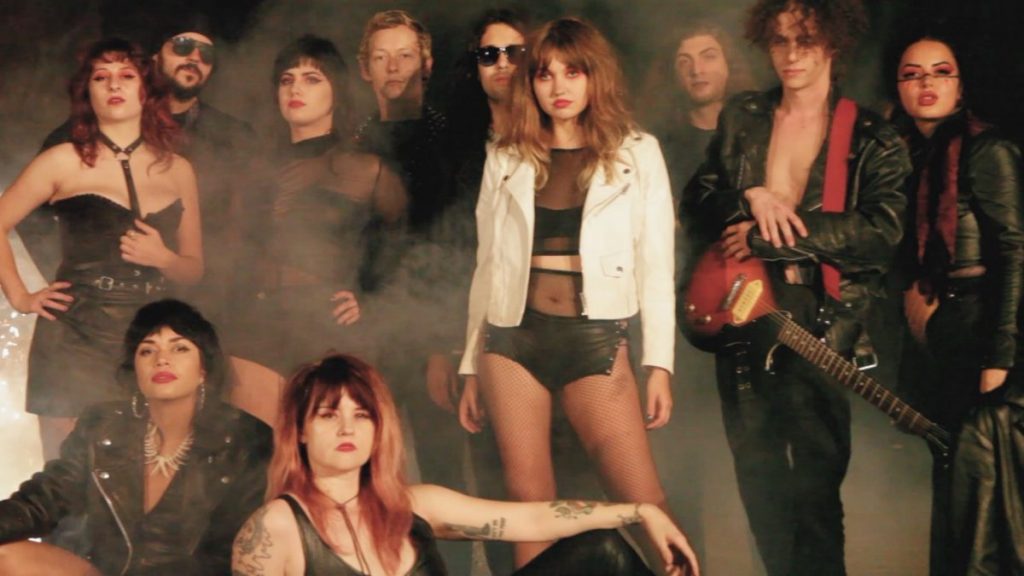 The Richmond garage-rock trio wanted to blow off some steam with the video for their latest single. And sure enough, the clip for Toward Space’s “I Won’t Do Crack (Without Heroin)” gets downright steamy.

The song itself, which came out in August of this year, is catchy and an instant classic for the band as it is. However, with the addition of some glory hole fun, classic city porch hangs, and sexy leather and fishnet, the song comes to life in a whole new way.

Not unlike the band’s past videos, like their 2019 release “Abella,” the cast is made up of loyal friends and local Richmonders. Gathering so many people for this occasion didn’t come without its challenges in the era of isolation.

“I’m lucky I have a bunch of friends who were willing to all get COVID tests and follow protocol to be in the video. We keep joking this was our ‘last hurrah,’ since numbers have surged,” said Seyla Hossaini, the band’s bassist and vocalist. “Expect some sullen silent films from me this winter, with a much smaller cast.”

Hossaini has played a major role in the creation and production for most, if not all, of Toward Space’s videos. She’s no stranger to the world of music video directing, having spent time directing videos for singers and rappers at Sound of Music Studios. Be it directing, choreographing, editing, or casting, she does it all with a flair for the freaky.

“I just happen to have a dirty mind,” said Hossaini. “I can’t help it, it’s always been like this.”

For this video in particular, she directed and tried her hand at choreographing. With some new dance experimentation, Hossaini grew her passion for conceptualizing music videos, and is already looking forward to future projects to keep stretching her abilities and gaining new ones.

“For me personally, if I didn’t push myself to keep creating in the midst of all this I would probably end up in bed crying every day,” said Hossaini. “I believe the same goes for my bandmates. Having to cancel multiple tours at the beginning of lockdown had us moping around for a bit back in March, but I think now we’ve accepted the situation to a degree. There are ways to be safe and still make art.”

In pursuit of a release of creativity in a locked-up setting, Toward Space created the music video for “I Won’t Do Crack (Without Heroin)” both for themselves and for the community they call home. Appropriately, all of the song’s proceeds on their Bandcamp will be donated to the CARITAS center for the month of December.

The CARITAS center, or Congregations Around Richmond To Assure Shelter, is a well known Richmond non-profit that focuses on caring for and housing those struggling with homelessness and drug addiction. For over 30 years, CARITAS has been meeting the needs of the community in big ways, and they’re expanding to reach even more of those who could use a caring hand. For Hossaini, choosing to donate the song’s proceeds to this organization was an act of compassion that came naturally.

“Ever since my cousin, who I was extremely close with, passed from an overdose, I’ve wanted to raise money for organizations that help folks struggling with addiction,” said Hossaini. “I’ve raised money for Daily Planet in the past, and I chose CARITAS this time because they opened a new wing for women recently.”

At the intersection of passion and compassion, Toward Space has an eye for community care, and aims to uplift the masses as they take hold of the reins and uplift themselves. With the heavy-hitting political and polarized year we’ve all been having, Hossaini used this opportunity to aim listeners in the direction of weight-lifting fun.

“I want viewers to enjoy the video and have fun with it,” said Hossaini, who has been riding the tumultuous merry-go-round of American politics with the rest of us and needed the relief just as much as any of us. “I’ve debated myself on politics in my own head to the point of migraines, nausea, losing sleep. The process of making this video was a huge release for me. I needed to make a mindless, non-politicized video.”

Looking forward, while the tumult of the year continues, Toward Space isn’t looking to quiet down anytime soon. Sure live shows may be a while off, but Hossaini has a few tricks up her sleeve to develop the Richmond music scene and keep the musical freak flags flying.

Watch the music video for “I Won’t Do Crack (Without Heroin)” below:

To download and donate to CARITAS, go to Toward Space’s Bandcamp (towardspace.bandcamp.com) this month, or stream it on Spotify and Apple Music.

All Photos via Toward Space