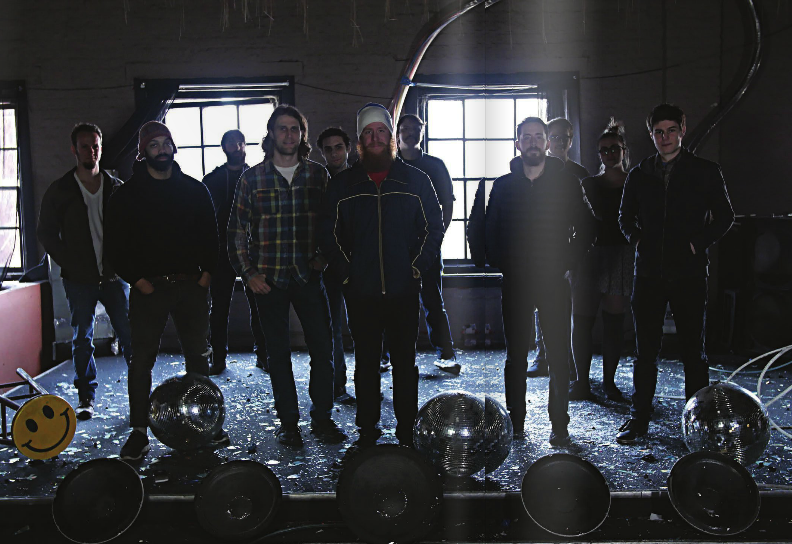 Even as the members of Good Day RVA tell me about the plans for their upcoming A Good Day In RVA festival, shaking their heads over the amount of work they still have left to do, they can’t hide their excitement. That excitement has fueled this film production collective from the beginning. And while the amount of time, money, and effort the group has poured into their efforts over the past three years has resulted in a less than prolific work rate, they’ve compensated by producing some of the best music-related short films to come out of Richmond–or any other city–in that time.

Good Day RVA was founded in 2012 by Chris Damon, Evan Hoffman, Will Weaver, and Matt Cowan, and has since expanded to over a dozen members. The group currently includes (deep breath) Tommy Terrell, Christian Gregory, Jesse Clark, Will Weaver, Coldon Martin, Chris Damon, Kevin Willoughby, Evan Hoffman, Craig Zirpolo, Mackenzie Werner, Matt Cowan, Glen Piegari, Brendan Williamson, and PJ Desutter (all but the last three are in the picture that accompanies this article). “Our main goal is to promote [Richmond] bands, and to promote the city,” Damon says. Their work combines these goals, filming live performances by various Richmond bands in significant locations around the city. Beginning with a performance by Black Girls shot inside a mausoleum at Hollywood Cemetery, they’ve since used such locations as Belle Isle (Nelly Kate), Main Street Station (White Laces), and the top of City Hall (The Trillions). And locations aren’t the only way Good Day RVA set their videos apart from the many live musical performance series you can find on YouTube. The group augments the live performances, shot on digital video, with 8mm footage shot in and around the location.

This juxtaposition originally came about by accident. “I took a Super 8 class with [VCU film professor] Dana Ollestad at Studio Two Three around the time of the first video,” says Hoffman. He then took some 8mm footage during the video shoot. The group liked the footage so much that they made a point of shooting similar footage for all of their subsequent videos. “It’s preserving that old character of film,” Hoffman says. “It creates a separate narrative.” Damon agrees, attributing an element of the supernatural to the 8mm segments. “We tell a ghost story with the Super 8 [footage].”

The idea for A Good Day In RVA was born not long after the group began releasing videos. At a time when they only had a few videos available online, this was a way for them to shine a spotlight on quite a few great local bands in one fell swoop. Weaver describes the lineup of the festival’s inaugural edition in May 2014 as “everyone we love,” though Damon hastens to point out that they’d “only scratched the surface.” “We could probably do this four times over and never have the same band,” he says. Indeed, this year’s lineup features 14 bands without repeating a single band from last year.

As with last year’s, the second annual A Good Day In RVA festival will take place at Hardywood Park Craft Brewery–a location Good Day RVA is extremely happy with. Damon calls Kerry Anderson, Hardywood’s hospitality manager, “a guru. She is very much responsible for a lot of the way the festival ran.” In fact, the group has a lot of admiration for Hardywood in general. “Hardywood has really fostered this new sense of urban community, and have created their own mini-scene there,” says Coldon Martin. “So we were really excited about bringing the indie rock scene into it.”

Martin also played the festival as a member of Lightfields, and found the experience to be just as positive from the performing end. “It was this really incredible, surreal experience,” he says. “[The show] was way bigger than anything any of the bands are used to playing, and there was a camaraderie, a leveling of the playing field. Everyone was part of the shared experience.” The fact that the show ran like a well-oiled machine the entire time didn’t hurt.

“The way that [inside stage soundmen] Bryan Walthall and James Seretis, and Mike and Todd from Backstage, who were [doing sound] outside, coordinated it, each band was no more than 2 minutes off their cut time,” says Cowan. “The other band [would] start immediately–it was perfect.”

As awesome as a well-coordinated showcase of excellent local bands will be, these are not the only highlights attendees can expect from 2015’s edition of A Good Day In RVA. The group’s interest in set design, such an important aspect of their videos, will be reflected in the stage sets. “When we started, we said, ‘Let’s invite some art vendors and some nonprofits’,” says Matt Cowan. “It snowballed into elaborate designs with props all around. I credit Erika Ogier and Rachael Cohen at Stuff Redux–they essentially wanted us to use their stuff for free.” A huge crew of volunteers, including Damon, Hoffman, and Cowan, as well as Reid LaPierre, Victoria Borges, Kate Rivara, Brendan Williamson, Mara Smith, Daniel Crawford, Tommy Terrell, Coldon Martin, Joey Anderson, and Bryan Unger, all pitched in to create the final version of the stage sets.

The result made quite an impression on showgoers. “People were taking pictures of the stage, [and] of the mannequin dressed up in the furry purple costume,” says Hoffman. “This would be an opportune time to implore whoever made off with the purple suit to please bring it back,” Cowan interjects. They’re not upset about the costume’s disappearance–they’d just really like to see someone wear it at this year’s festival. “We don’t care, you can keep it,” says Cowan. “Just wear it.”

Even more memorable than the purple costume’s disappearance was what happened while Navi was playing. “[Some women] got off a bus on the tail end of a brewery tour,” says Cowan. “This woman [got onstage] and started hitting the cymbals–bam bam bam,” Hoffman adds. “And [Navi drummer] Kyle [Flanagan] is like ‘Don’t cut your hand,’ because his cymbals are all broken and jagged–but [Navi] were loving it.” For his part, Navi guitarist Jon Hawkins has fond memories of the incident. “I felt someone walking on the stage behind me and thought to move so they could [stagedive],” Hawkins says. “Then I could hear the woos right next to my ear. I’ve never seen Kyle look so nervous playing drums in my life. That made me laugh. I think I later heard that it was a bachelorette or birthday party. I hope it was as memorable for them as it was for us.” “Navi was the perfect band for that incident to happen with,” says Damon. “Any other band might’ve been like ‘Please get off the stage’.”

Perhaps nothing that spontaneous will occur at 2015’s A Good Day In RVA Festival–but this year’s edition has plenty to recommend it regardless. It will feature the same elaborate stage design that captivated so many attendees last year; the inside stage at Hardywood will feature a space theme, while the outside stage will be decorated in prehistoric fashion. The event will feature tabling by WRIR 97.3, The People’s Library & The People’s Paper Co-op, Rag & Bones Bicycle Co-op, Stuff Redux, Girls Rock! RVA, Love This, and more. There will be food trucks aplenty, and of course lots of delicious craft beer from your gracious hosts at Hardywood. And let’s not forget the bands! This year’s festival will feature performances by primitive washtub-banging punks The Nervous Ticks alongside the psychedelic indie sounds of Avers, the Eastern-influenced ambient sounds of Lobo Marino, and Nelly Kate’s hypnotic electronica. 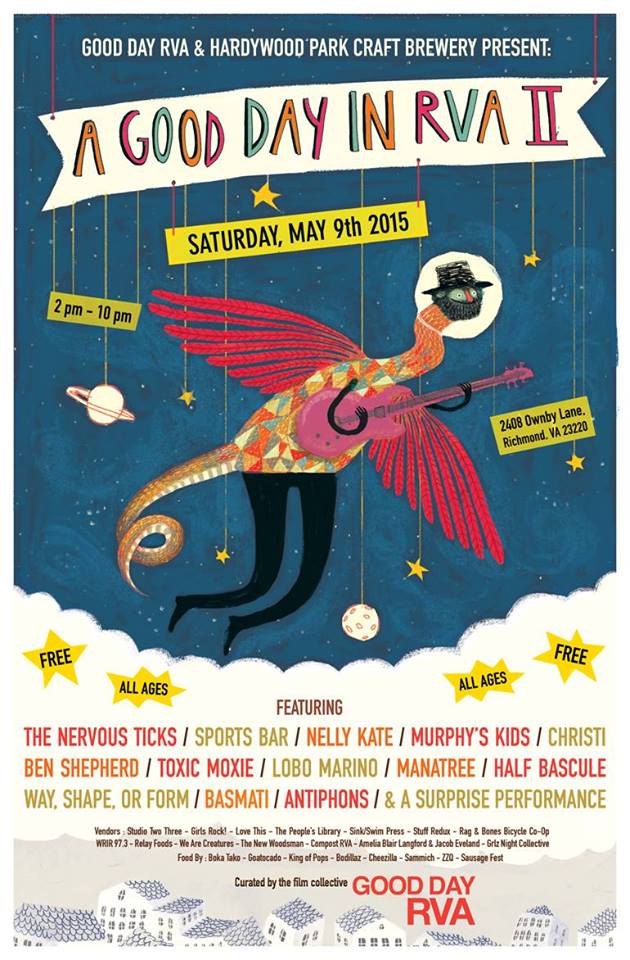 Also on the bill are Manatree, Ben Shepherd, Christi, Half Bascule, Basmati, Toxic Moxie, Sports Bar, Way Shape or Form, Murphy’s Kids, and a special surprise guest that should knock everyone out. It’s all taking place on Saturday, May 9 beginning at 2 PM at Hardywood Park Craft Brewery, located at 2408 Ownby Lane–and just in case you aren’t sold yet, admission is absolutely free.

In the meantime, Good Day RVA has plenty more to do. They’ve recently obtained 501(c)(3) non-profit status under the auspices of EnRichmond, and are planning to launch an Indiegogo campaign soon. They’ll film the latest entry in their live performance video series, featuring garage rockers Warren Hixson, in April. And of course, all of the members are hard at work to make 2015’s A Good Day In RVA Festival even better than last year’s.In the three years they’ve been working together, Good Day RVA have gotten a lot accomplished. The fact that everything they’ve done has been of incredibly high quality despite the scheduling and budgetary constraints they’ve had to work under only proves that nothing is going to stop them now. From their eminently watchable live video series to the second annual A Good Day In RVA–sure to be one of the best live music events of 2015–Good Day RVA are doing amazing things. Don’t miss out.

For more details on A Good Day In RVA, the group’s upcoming Indiegogo campaign, and their ongoing live performance video series, visit gdrva.com.

A group formed by the owners and operators of a variety of Richmond's leading restaurants is asking our government to step in during this... READ MORE

Ahead Of Their First Official Tour, Majjin Boo Get Criminal

Coronavirus has led to the cancellation of their first official tour, but regardless, today, Richmond indie band Majjin Boo is releasing... READ MORE

A group formed by the owners and operators of a variety of Richmond's leading restaurants is asking our government to step in during this... READ MORE

Ahead Of Their First Official Tour, Majjin Boo Get Criminal

Coronavirus has led to the cancellation of their first official tour, but regardless, today, Richmond indie band Majjin Boo is releasing... READ MORE