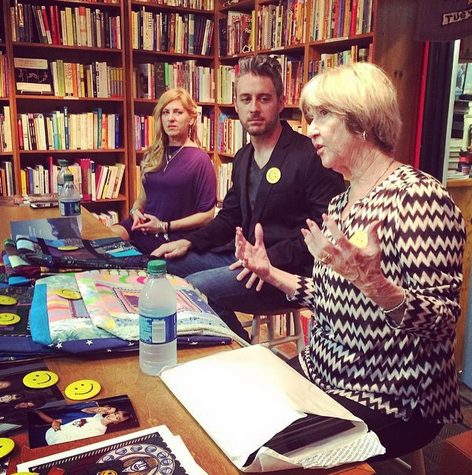 The Great Southern, a festival honoring the show, brought Lucy Moran and Betty Briggs to town, along with many questions about the possibility of a third season of the beloved show.

While it originally aired on ABC, ShowTime has worked with David Lynch and Mark Frost, the original creators of the show, on producing a third season after a 25-year hiatus. Recently, Lynch sent out a tweet saying he would no longer be a part of the production because they could not agree on a budget to produce it the way he wanted.

After 1 year and 4 months of negotiations, I left because not enough money was offered to do the script the way I felt it needed to be done.

Brad Dukes (top image middle), who wrote Reflections: An Oral History of Twin Peaks and was a guest for the Great Southern, said despite this announcement, he still has hope for a new season.

“To me it was a little alarming that he was so definitive in saying, ‘I’m walking away.’ I just hope he’s still open to doing it,” Dukes said. “I don’t personally feel like he has to direct every single episode of new material. There are other directors that did some fine work.”

He said, at the very least, both Frost and Lynch had partnered to create the scripts so their creative genius was still behind it, even if Showtime decides to produce it without them.

In a Q & A at Carytown’s Chop Suey Books, Kimmy Roberston (top image left), who played Lucy Moran, and Charlotte Stewart (top image right), who played Betty Briggs, both said Twin Peaks would not be the same without Lynch.

They both worked on a video made by the show’s cast members in support of their former director.

“We told showtime that without david lynch, we are not involved,” Stewart said. “And I think that goes right down the line with all the characters. So they have to recast it,” she said, which made the entire room full of fans laugh.

After dozens of emails, the cast pulled together clips in two days.

Stewart worked with Lynch prior to Twin Peaks and said she trusted his judgment very much.

“I don’t question him. I was with Eraserhead with David and, you know, if he tells me to do something he’s got it in his mind. If he says to do it, I do it,” she said.

Stewart said the director was incredibly meticulous, putting more effort into a 60 minute movie than most people do to make a TV show of the same length.

But at the end of filming with Lynch, Stewart said she realized what an artist he really is.

Robertson said when people ask why someone else besides Lynch couldn’t direct Twin Peaks, she said it’s because he had a quality few other directors posses.

“They make an atmosphere, and it’s between you and him, where he says ‘what would your character do?’ So he’s acknowledging your character’s alive and it has decisions to make and reasons for why they do something,” Roberston said. “And right there, that’s completely different than most people who are directing.”

Roberston said she used to call it hypnotizing, and it dramatically improved the efficiency during filming.

“It makes it much more magic and it makes everything work [in] one take, two takes right?” she said, looking at Stewart for confirmation. “Aces. That’s it and you’re done. And that is priceless. There’s no ego, there’s no waste of time. And you don’t feel like a sack of shit on your way home.”

Both Stewart and Roberston realized Twin Peaks was unlike any other show on television when it became a “watercooler series,” where everyone talked about the newest episode at work the next day, and they were no longer given full scripts, just pages for their own scenes.

No one was allowed on set unless they were in the scene. The cast used to meet at restaurants and bars to watch the newest episode together and speculate about what was coming next. Both actresses spoke about a bond they had with the show, and fellow cast members, that still exists today, as referenced by their working together in a show of support for Lynch.

Stewart said she was extremely surprised, but very happy, to find out they would reunite for a third season. While her husband in Twin Peaks and friend in real life, Don Davis, passed away in 2008, Betty would return to her home for what she suspects are more scenes with her son Bobby, played by Dana Ashbrook.

Roberston said she had a much more emotional reaction to the confirmation of a new season. She actually had a dream-like vision of Lynch and his assistant Sabrina, who is also Robertson’s good friend, very early in the morning one day.

She said she’d close her eyes and they’d be look down on her, but when she opened them they were gone.

“Something told me to check my iPad and I did, and I don’t ever do that first thing,” Roberston said. “But I see all these messages and I just slammed it shut and just laid there. I was like something’s happening.”

She received a call from Sabrina and immediately sunk to the floor sobbing, but they were tears of happiness she said.

“I had to be in touch with the ground and just sob because so many people have been asking for it for so long and that hurts. And it took all of that away,” Robertson said. “And of course now…. I supposed the key is to not be emotionally invested at all in any kind of work that you do. Unless you’re the president.”

While the fate of the new season is still a mystery, which is rather fitting for the show, Twin Peaks continues to resonate with fans and crawl into the hearts of new people every year.

Dukes said he would love to be able to write a part two of Reflections in honor of such an iconic show. He said the care that went into the emotions, existential dread and humor of the show made it on of the “most real life shows” he’s ever seen and is also why it’s still so popular.

“I still think, I know this might sound silly but, ever since I watched the show I feel like that world is somewhere in another dimension and characters like Betty Briggs and Lucy are living their lives,” he said. “And I’m just dying to know what’s going on, where they’ve been, what they’ve been doing.”