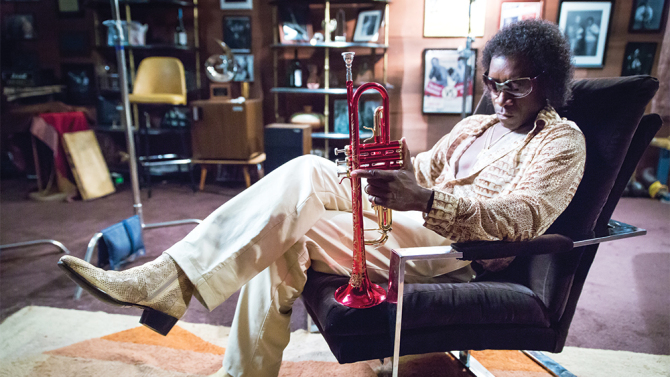 If there’s any lesson to learn from Miles Davis’ music, it’s to say more with less.

I’d attempt applying this to my review here, except I can’t leave you without (just a little) more.

If there’s any lesson to learn from Miles Davis’ music, it’s to say more with less.

I’d attempt applying this to my review here, except I can’t leave you without (just a little) more.

In seeing Don Cheadle’s name as Director the director of “Miles Ahead,” as well as knowing the main role is his, one can’t help but see the parallel between Miles’ own very connected participation with his own musics’ creation and Don’s as the frontman and overseer of his artistic endeavor. Very apt.

The physical resemblance Cheadle maintains is certainly commendable, as is the attention to the various decade-specific aesthetics throughout the film’s 100 minutes. In particular, I loved the shots in the studio during what were undoubtedly meant to be the late 50’s sessions yielding “Kind of Blue” and collaborations with Gil Evans (who was briefly but admirably represented).

These scenes look very much like the photos from the very same albums, which were a wonderfully conspicuous show of the visual inspiration. Also present at various points in the movie were actual musicians from those decades including Paul Chambers and Herbie Hancock.

Other important figures were cast but usually only receiving Miles’ dialogue including but not limited to the Columbia producer Teo Macero (with whom Miles had a notoriously dramatic relationship) and the pianist known as Bill Evans (whom Miles said played a “quiet fire”).

The most important figure to the film, other than the late Davis, is Frances Taylor, the accomplished dancer who Miles just couldn’t get over. In relationship to what we know of his knowing her from Miles’ autobiography, Emayatzy Corinealdi does a great job of asserting the nurturing and sensitive elegance that Taylor seemed to have brought in to famed musicians life.

Her interjections into Miles’ daydreaming throughout the film do indeed, with a mythical idealism, confirm how special Taylor seemed to be to Davis.

Ewan McGregor as the Scottish Rolling Stone writer Dave is well-placed and it is around the interactions of him and his subject that the story-slice of Miles’ life are presented.

The movie uses several authentic events to anchor a few narrative near-stretches to cause good flow. And to that end, I would certainly applaud the opening 20 minutes’ editing and use of music. With the ability to draw from all of Davis’ catalogue, Cheadle spans close to four decades worth of choice song chunks all woven back to front and it’s arguably worth mentioning that the amount of Miles’ electric music was probably higher than the earlier acoustic stuff.

I personally was provided a new enthusiasm for a song that I always felt was a bit too struggled; just because of the picture’s correspondent energy.

Much of the film is about the conveyance of the essence of Miles, of his attitude and his feel for life, and if you’ve read the book, it’s no sunny day walk. He abused substances and people, and certainly had trouble communicating his sentiments on occasion. His love for the women in his life was strong, but perhaps stronger was his need for space. And overall, this movie depicts just that.

But it also shows a man ever-brewing internally, and no matter how encumbering, the situation ever able to hone and point focus and passion towards a musical outlet. This would even apply to the music of the time at his reemergence; Miles found it mostly garbage and says so. For all we know, this possibly bolstered the need he felt to reinstate his creative prowess.

All in all, “Miles Ahead” is honest: say the story stretches fabrications if you want, but they’re pretty transparent. The authenticity is there, and the scenarios provided do glimpse, as best we possibly can at this point. Some parts of the personal life of the artist are respected, revered and even feared. Hats off to Cheadle for this portrayal of such a brilliant Gemini, and as one myself, I’ll vouch for knowing how hard being two people can be on a person.