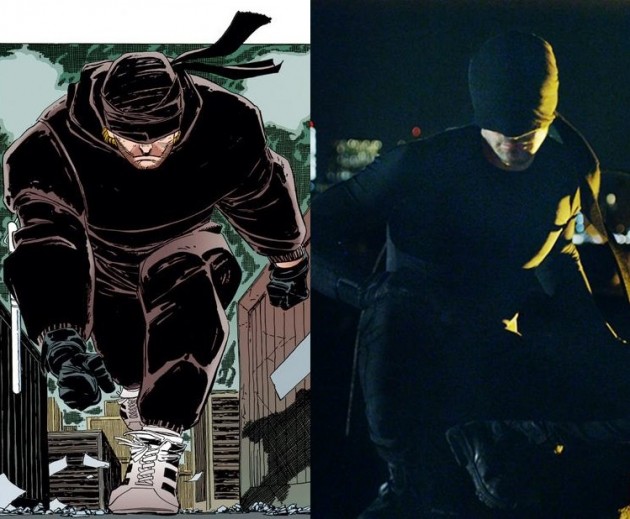 Odds are when you hear the name “Daredevil” you suffer flashbacks to the highly regrettable 2003 Ben Affleck film.

Odds are when you hear the name “Daredevil” you suffer flashbacks to the highly regrettable 2003 Ben Affleck film.

As any comic book fan can tell you, that film from did little for the character many have come to know as the “the man without fear”, instead turning him into a laughing-stock. I mean, who can forget the angsty montage set to Evanescence’s ‘Bring Me to Life’, or this glorious fight sequence.

But now Netflix hopes to help wash the bad taste of 20th Century Fox’s misstep out of your mouth with their new Daredevil streaming series, available Friday at 12:01 am PST.

The series still follows our favorite blind lawyer as he sets out to protect the NYC neighborhood of Hell’s Kitchen from the vile Kingpin, but Netflix hopes to take a decidedly darker and more grounded approach.

Drawing heavily from Frank Miller and John Romita Jr.’s 1994 mini-series Daredevil: The Man Without Fear, the series will follow Matt Murdock as he turns from mild-mannered lawyer into vengeful guardian.

Daredevil, for those unfamiliar, is the alias of Matt Murdock. Blinded as a youth in an accident, Murdock finds his other senses enhanced, gifting him with a echolocation-esque sixth sense. After the death of his boxer father, Murdock pledges to fight crime, both via his career as a lawyer and as the vigilante known as Daredevil.

The series stars Charlie Cox from Stardust and Boardwalk Empire as the titular hero, with Vincent D’Onofrio, Deborah Ann Woll, and Rosario Dawson rounding out the cast. Despite being set in the same cinematic universe as The Avengers and other recent Marvel movies, Daredevil is said take a decidedly darker approach, with the TV-MA rated program meant to cater more to adults than all-ages.

So far the program has received almost exclusively positive feedback, even being compared to The Raid, District 13, and Taxi Driver by Deadline.com. Marvel’s Daredevil will only have surface level comparisons to other popular comic TV shows like Arrow or The Flash, with io9 saying “Not only is the violence a lot more brutal in Daredevil, but the characters are allowed to be slightly more honest and less melodramatic.”

Fans will likely notice that Daredevil’s iconic red costume is missing, instead replaced by an all-black look, resembling a ninja more than a superhero. This is a clear reference to the Miller series, which has The Man Without Fear donning a black jumpsuit and a blind-fold as he dips his toe into vigilantism.

Never fear fanboys! The show’s creative team has promised the red suit will make an appearance by the finale of the season, mirroring Miller and Romita Jr.’s origin series which similarly doesn’t show the crimson garb in later issues.

Marvel’s Daredevil is the first in a sequence of TV series set in the MCU nicknamed “The Defenders”. Netflix and Marvel have already begun production on A.K.A. Jessica Jones based on the 2001 Marvel MAX series Alias, with two more series — Luke Cage, and Iron Fist — expected to follow soon after.

You can binge to your nerdy heart’s content Friday, as typical to the Netflix model all 13 episodes will be available to stream at 12:00 am PST. We urge you to give it a shot, especially if you hated the Affleck film.