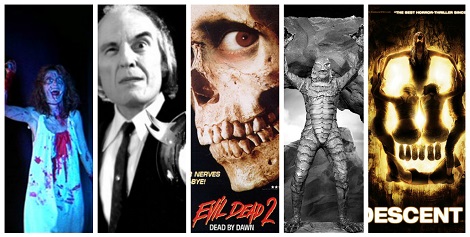 Suspiria, a gruesome nightmare that many consider the finest example of Italian horror, is one of two such pictures to make my list. The other is also directed by Dario Argento, a gifted filmmaker who spent much of the 70s and 80s churning out stunning motion pictures before descending into mediocrity in the 90s and beyond. This inventive yarn is a dark fairy tale of sorts, with a roving camera and a bold color palette which give the picture a surreal tone that is positively enchanting. The score by Goblin is one of the most striking scores that the horror genre has ever been blessed with, and the bloody effects work is top-notch. The script is simple but effective; Jessica Harper’s Suzy Bannion travels to a prestigious dance school where something is seriously amiss. After a number of grisly murders occur and our heroine starts to investigate some spooky shenanigans taking place, Suzy discovers that the academy is merely a front for a coven of witches. Argento was at his peak here, and the ominous atmosphere and the outright terror that he is able to conjure up throughout this fascinating picture is damn impressive. Some of the kills in this movie are incredibly disturbing, and there are a handful of less violent sequences in the mix that are ridiculously creepy. The cast performs well, with Harper giving her best performance and genre vet Udo Kier popping up in a brief but welcome part. Despite his recent misfires, of which there are many, I still consider Dario Argento a legend in the realm of horror cinema for his incredible body of work–and Suspiria undoubtedly ranks among his very best. In fact, while I favor another picture (those who follow my blog closely are already aware of this, but the rest of you will have to wait and see), most probably consider this to be his greatest achievement.

Phantasm isn’t just one of the strangest horror films out there, it’s also one of the coolest. How often do you get to see a movie where a gutsy ice cream man who plays a mean guitar goes toe to toe with a terrifying mortician from another dimension? Delightful, right? Our main characters are an exuberant teenage boy whose brother may or may not be dead, said brother/ghost/I’m-not-sure-what, and Reggie the ice cream vendor, one of the horror genre’s most beloved heroes. While Reggie Bannister absolutely kills it as Reggie (all of the leads in this flick have the same first name as their character), Angus Scrimm dominates the proceedings as the villainous mortician, known simply as “The Tall Man.” Scrimm’s work here is so unique and so totally on point that he grounds this delirious flick and keeps audiences riveted throughout all the strange twists and turns that Phantasm takes on the way to a wonderfully bizarre conclusion. The effects are solid, the score is epic, I treasure the performances, and the script and the direction c/o Don Coscarelli are extremely exciting and expertly realized. This movie has everything going for it, and it delivers the goods–Phantasm is an awesome blend of scares, chuckles, and crazy shit. That gonzo finale gives way to one last big scare, cementing Phantasm’s status as an iconic horror film that has inspired several sequels aimed to please a rabid fanbase that is still clamoring for more. I have been a big fan of this film (and Coscarelli’s output in general) for most of my life, and I can’t imagine putting together a list like this without including Phantasm.

When Sam Raimi made a name for himself in the horror genre, he did so with The Evil Dead, a grim affair that was dark, dreadful, and brimming with bodily dismemberment. It was a bit of a shock when he followed that picture up with this sequel, a delirious effort that mixes demonic possession and severed limbs with heavy doses of slapstick humor that would have garnered applause from The Three Stooges. Yet Raimi’s high-energy direction and Bruce Campbell’s immaculate chin made this mash-up an astounding success. Three decades later, fans are eagerly awaiting the latest from this franchise, the Showtime series Ash Vs. Evil Dead, which is set to debut on October 31, 2015. If that show is half as good as Evil Dead 2 (and based on what I’ve seen, I’m pretty damn optimistic), we’re in for a real treat this Halloween. Fast-paced, funny, and utterly ridiculous, this is surely one of the most purely entertaining movies to be featured on my list. Everything about this cult classic is aimed at being so over-the-top that it makes William Shatner’s work seem like method acting. The effects, the performances, the score, and Raimi’s wild camera work are all designed to wring every drop of fun out of a kooky script that allows for an abundance of gore and some of the silliest bits you’ll ever see in a horror flick. In short, Evil Dead 2 is a zany descent into horror and comedy that works to sheer perfection. While I’m not at all surprised that it made the cut, I am a little surprised that I didn’t wind up ranking it much higher on my list.

I love all of the “Classic Monsters” and I’m not here to throw shade at Dracula,Frankenstein, The Wolf Man, or any other ghoulish menace who ran with that Universal Studios crew. I am here to anoint the scaly fiend who terrorized the crew of the good ship Rita as my personal favorite of the bunch. I also feel that his movie is the coolest, and I think it’s a bit odd that he’s the only representative of that era who hasn’t seen his saga officially updated for modern audiences. Of course, given the strength of this picture, maybe it’s better that way. The Creature from the Black Lagoon is a whimsical and exciting horror film that boasts stellar cinematography, giving genuine meaning to the phrase “in glorious black and white.” The creature design is incredible, and the meticulous application of the costume yields one of the best-looking monsters of all time. The creature’s presence on screen is still rather breath-taking more than sixty years after The Creature from the Black Lagoon was released. A strong cast that includes Richard Carlson and Julie Adams helped director Jack Arnold breathe life into this fascinating classic that features some of the best underwater photography that you’ll ever see. More so than any of the other beloved horror films that Universal produced, I think there’s something magical about The Creature from the Black Lagoon that extends beyond the unique look of the titular menace and the technical prowess on display. The themes concerning the environment and science that run just beneath the surface never distract us from the wonder that the picture inspires. The creature is both fearsome and sympathetic, giving the film additional depth and conflict. Creature from the Black Lagoon is a rich and rewarding motion picture that is still impressive to behold, and there’s no way I could make a list like this without including it.

This claustrophobic feature from 2005 delivers the goods so far as both internal and external fright is concerned. The Descent is a movie that is willing to do anything to destroy your comfort zone and subject you to absolute terror. The plot follows a group of adventurous women who enjoy extreme sports. Hoping to offset the grief one of their members is dealing with as she struggles with the loss of her husband and daughter in a tragic accident, they prepare for an expedition into a pedestrian cave. Unfortunately, this attempt at social therapy goes badly awry when their leader elects to forego the novice grotto and instead leads her peers into an uncharted system. Early on, a passage becomes blocked, and these unlucky ladies know there is no hope of rescue as the proper authorities believe they are in another cave altogether. Now, these feisty females must find a way out before their batteries go dead and they are lost in the darkest recesses of the Appalachians. This is a terrifying premise, but things get worse when writer and director Neil Marshall injects cannibalistic humanoid monstrosities into the mix. Expertly plotted, well-acted, and bolstered by sensational cinematography and effects, The Descent is a relentless horror film that is packed with tension and fright. It is one of the most terrifying films to make this list, and I will add that I really dig all the girl power on display throughout this riveting gem. If I was making a list of the scariest horror movies ever, this incredibly dark motion picture that doesn’t pull any punches would rank even higher.

Stay tuned next week for the TOP 10 List for Best Horror Movies by James Wayland. ​

We’ll put the rest of Wayland’s list up as we get closer to the big day, until then check out his blog here.

If you’re looking for a way to get in the Halloween spirit outside of these movies, make sure you check out our Halloweek series of events here!