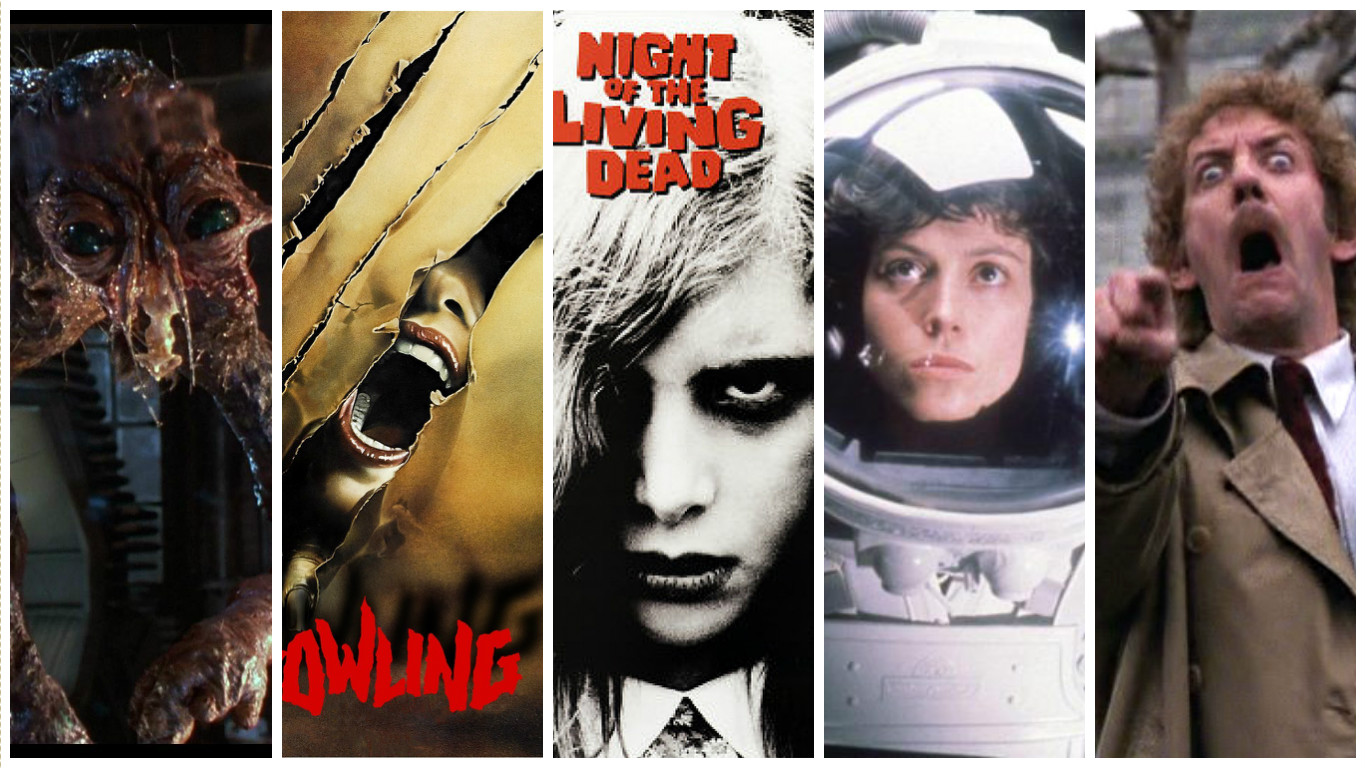 James Wayland is the author of the novels Trailer Park Trash & Vampires and Dirty Southside Jam, as well as the novella Just the Fright Job – the man knows good horror. So when he asked if we’d run his top 20 horror movies, we jumped at the chance.

The first entry on my list is one of three remakes to be included.  This one is surely the wildest departure from the original, as this somber tale bears little or no resemblance to the cheeky Vincent Price vehicle from 1958.  This 1986 version of the The Fly is directed by David Cronenberg, one of the most visionary directors of them all.  Cronenberg’s intense and often perverse work has largely originated within either the horror genre or the science fiction genre, and I think this deliberate terror yarn stands as his grandest achievement.  It’s also the best work that Jeff Goldblum has ever done, and his total immersion into the part of Seth Brundle, a daring and strangely charismatic scientist, is amazing to behold.  Throw in some fabulous effects work and an eerie score by Howard Shore and you have the makings of a classic.   This version of The Fly is a slow burn that works magnificently.  The first two acts are largely about meeting the characters and witnessing a failed experiment and the subsequent transformation as Goldblum’s wacky but lovable scientist becomes one of the most grotesque monsters ever put on film.  These portions of the film are ripe with suspense and dread, while the third and final act is where most of the gruesome action takes place.  The film is potent; the combination of disturbing visuals and difficult content make it every bit as emotional and dramatic as it is frightening.  Yes, this version of The Fly is everything that I’m looking for in a great horror film, and viewing it remains a riveting experience that I highly recommend.

One of two werewolf movies to make the list, The Howling is a twisted frightfest that I have a lot of affection for.  It has all the necessary ingredients for a quality horror flick, to include a worthy cast, an excellent setting, some creepy visuals, and an ominous mood.  The script by John Sayles varies greatly from the novel by Gary Brandner, but brings an engaging and fearsome story to the screen to superb effect.  Director Joe Dante does a tremendous job, and while I’m a big fan of Joe’s other genre efforts (most notably Gremlins and Piranha) I believe that this is his best feature film.  It’s tightly paced, brimming with atmosphere, and loaded with shocking sequences.  I’m awarding some serious bonus points for the unnerving opening and the equally disturbing conclusion.  There’s also a nifty scene midway through the picture that surely ranks as one of the most frightening horror scenes out there that takes place in broad daylight.  The cast is stellar, with Dee Wallace slaying it in the lead role with quality support from players like Patrick MacNee, Kevin McCarthy, Slim Pickens, and the one and only John Carradine.  Pino Donaggio gave the film an eerie score that is a splendid fit for all the spooky shenanigans unfolding on the screen.  The Howling is equal parts engrossing, entertaining, and terrifying.  It is somewhat amazing to me that both this picture and that other werewolf movie released in 1981 (a superior effort that is ranked much higher on my list) remain the finest attempts to bring lycanthropy to the cinema.

This is one of two zombie movies from the legendary George Romero to make my list, and while Night of the Living Dead may not be his masterpiece, it remains eerie and effective all these years after its initial release.  Yes, we had seen zombies on the screen before, but never quite like this.  The shock and dismay that this bleak low-budget affair inspired gave birth to a sub-genre that has never been more popular that it is now, some 47 years after Night of the Living Dead hit the scene.  It remains potent because it was so raw, so stark, and because the man at the helm proved to be a genius.  The horror of the undead laying siege to a remote farmhouse where a few scrappy survivors have holed up also proved to be a terrific premise for exploring serious themes.  The very presence of Duane Jones in the lead role, not to mention his serious performance and the ultimate fate of his character–all of these things speak volumes about the period when the movie was made.  In fact, many of these notions still hold a great deal of relevance in this day and age.  Besides, despite the weight of these themes, the movie never suffers.  It is entirely possible that many viewers are oblivious to the commentary, for the picture quickly descends into a grim nightmare and it never fails to function as a gruesome chiller.   I’m a big fan of the zombie sub-genre (there are three* such pictures on my list, including this black and white gem, the best zombie film of them all, and Romero’s epic improvement upon the formula he created) and this tense and relentless horror film is where the zombie as we know it was born.  Beyond that, it’s a fantastic flick that surely warrants a spot on my list.

*Just so we’re clear, deadites are NOT zombies.

First off, I want to say that I do believe that Alien is a stellar horror film.  Secondly, I will acknowledge that I think that this film’s sequel, Aliens, is a much better picture.  However, Alien made my list and Aliens will not.  Why?  Well, Alien is a horror film, but I think Aliens is a bit more like Predator.  Is it a science fiction movie?  Is it an action movie?  I’m not sure, but despite the presence of some horrifying content, Aliens just doesn’t feel like a horror movie to me.  Alien, on the other hand, is most certainly worthy of a spot on this list.  It’s not a thrill ride with guns blazing, it’s a subdued tale of terror that relies more on escalating tension and big scares than escalating machismo and big explosions.  The mood and the sets are incredible, the effects are totally convincing, and the cast is superb.  Sigourney Weaver’s work here made her a star, and she is backed by talented performers like Tom Skerrit, John Hurt, and Yaphet Kotto, among others.  There isn’t a wealth of gore, but the scene where the alien bursts out of John Hurt’s chest is one of the most disturbing sequences that the horror genre has ever produced.  The design work by H. R. Giger is one of the picture’s biggest assets and Ridley Scott’s direction is splendid.  Alien is bolstered by one of Jerry Goldsmith’s finest scores and the sceenplay from Dan O-Bannon is terrific.  In short, Alien is a gripping horror film that fires on all cylinders thanks to the presence and the efforts of a first-rate cast and crew.  It remains the best horror film set in space (though Event Horizon is pretty damn scary too) and I am pleased to include it on my list.

The second of three remakes to grace my list is a creepy sci-fi/horror hybrid that greatly improves upon the original Invasion of the Body Snatchers from 1956, which was a damn good movie itself.  This creepy affair has a stellar cast and impressive effects, and Phillip Kaufman showed a deft touch with his direction.  In particular, Kaufman did a great job of utilizing the city of San Francisco as the setting and capturing some really wonderful images of the alien spores that threaten our heroes.  The plot is obviously a real winner; we’ve seen a couple of different versions of the same story since this remake was released, and there are a number of other films that are clearly imitations of this sinister saga as envisioned by the author of the source novel, Jack Finney.  Things start slowly, but soon paranoia gives way to outright terror as our weary players struggle to survive, wondering who they can trust and who has already been replaced.  Donald Sutherland and Brooke Adams are outstanding in the lead roles.  The supporting cast includes Leonard Nimoy, Jeff Goldblum, Veronica Cartwright, and Art Hindle, and Kevin McCarthy (the star of the 1956 version) briefly pops up in a significant cameo.  I like the score from Denny Zeitlin and I really like the way that this Invasion of the Body Snatchers slowly builds to a terrifying crescendo.  The last scene is a genuine shocker, and as many times as this tale has been brought to the screen, there can be no doubt that this is the best version.  It remains one of my favorite horror films, and it is certainly deserving of the #16 spot on my list.

We’ll put the rest of Wayland’s list up as we get closer to the big day, until then check out his blog here.

If you’re looking for a way to get in the Halloween spirit outside of these movies, make sure you check out our Halloweek series of events here!