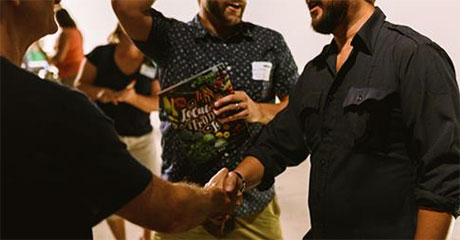 Earlier this month a little over 100 people gathered for fresh coffee and a talk from RVA Magazine founder and designer R. Anthony Harris.

Earlier this month a little over 100 people gathered for fresh coffee and a talk from RVA Magazine founder and designer R. Anthony Harris.

“We started RVA Mag in 2005 and RVA was not a thing. It was RIC,” Harris said opening the event – something many folks don’t seem to remember.

The event, Creative Mornings, was started in New York by Swiss Designer Tina Roth Eisenberg as a chance for people in different communities to get together and learn about creative folks in their areas. It’s since been transplanted to places like Richmond where there are tons of creatives and even more people who like coffee.

Sure enough Harris was asked to explain what we do and he was glad to get involved.

“We needed a banner, we need something to get behind,” said Harris, explaining where the idea for an alternative Richmond-focused arts and culture magazine came from. “Richmond’s pretty cool. Why don’t we get together and change it – stop complaining, going to New York or LA… why not start our own party here instead of joining someone else party.”

What unfolds over 30 mins is the origin story of through the eyes of the founder. Check out the video from the full talk below —