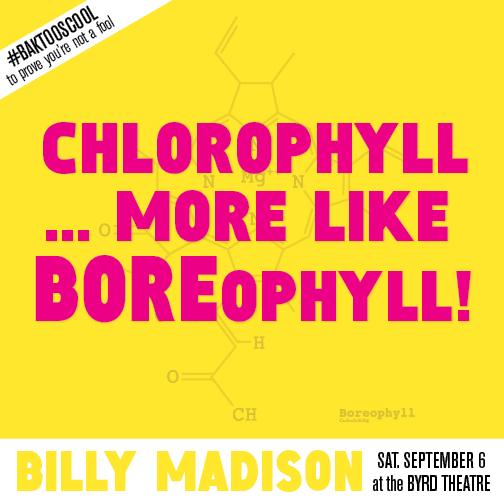 This Saturday, the Byrd Theatre will be hosting a special screening of the Adam Sandler classic Billy Madison. All proceeds of this show will go to the Ron “Otto” Matthews Memorial Fund.

This Saturday, the Byrd Theatre will be hosting a special screening of the Adam Sandler classic Billy Madison. All proceeds of this show will go to the Ron “Otto” Matthews Memorial Fund. This charity benefits the Tuckahoe Volunteer Rescue Squad, a local non-profit group that has been operating in the Richmond area for over 60 years.

Katie Matthews, daughter of the late Ron Matthews, has been organizing these an annual events. In previous years, the Byrd has had special screenings of Jurassic Park, as well as select “Treehouse of Horror” episodes from The Simpsons. “I have been selecting something Ron enjoyed, and I try to think of movies he liked that are also family friendly,” Katie says. Like this year’s showing of Billy Madison, proceeds of the previous years’ events have also gone to the Ron “Otto” Matthews Memorial Fund. Having this event at the renowned Byrd Theatre was a natural choice for Katie. “It’s one of the greatest jewels of Richmond,” she said. “Richmond was a very important city to my father.”

Although Saturday has yet to come, Katie is already considering her options for next year’s screening, saying, “I can tell you, as soon as this event is over, I’m going to start thinking about what I want to do for next year,” she said. “I think it would be fun to get people’s feedback of what they would want to see, and then try to correlate that with a film Ron really loved.” One can hardly blame her for already looking to the future. Showings of Jurassic Park and The Simpsons drew over two hundred, and three hundred attendees, respectively. “I definitely want to make this an annual event,” Katie says.

As the show has increased in popularity over the years, many local businesses and organizations have gotten in on the act. This year’s sponsors include Carytown Burgers and Fries, Hardywood Park Craft Brewery, and the VCU Arts Department of Film and Photography. “They’ve been a huge help getting this to happen,” Katie said. Not only have these groups helped sponsor the event, many have also provided prizes for a raffle that will be held at the screening. “A lot of local businesses have been amazing donating different gift cards and things like that for the raffle before the screening starts,” Katie said.

For Katie Matthews, an alumni of VCU’s cinema studies program, this event is as much about raising money for a worthy cause as it is about sharing her love of film with the community. “I have always attributed my interest in film to my father, and that’s partially why I do this event the way that I do,” Katie said.

The Tuckahoe Volunteer Rescue Squad will be presenting Billy Madison at the Byrd Theatre this Saturday, Sept. 6. The Byrd Theatre is located at 2908 W. Cary St., Richmond, VA. Tickets are $7 (cash only) at the door. Doors open at 12:30pm and the show starts at 1:00pm. For those interested in donating directly to the Tuckahoe Volunteer Rescue Squad, please visit tuckahoerescue.org/donate.