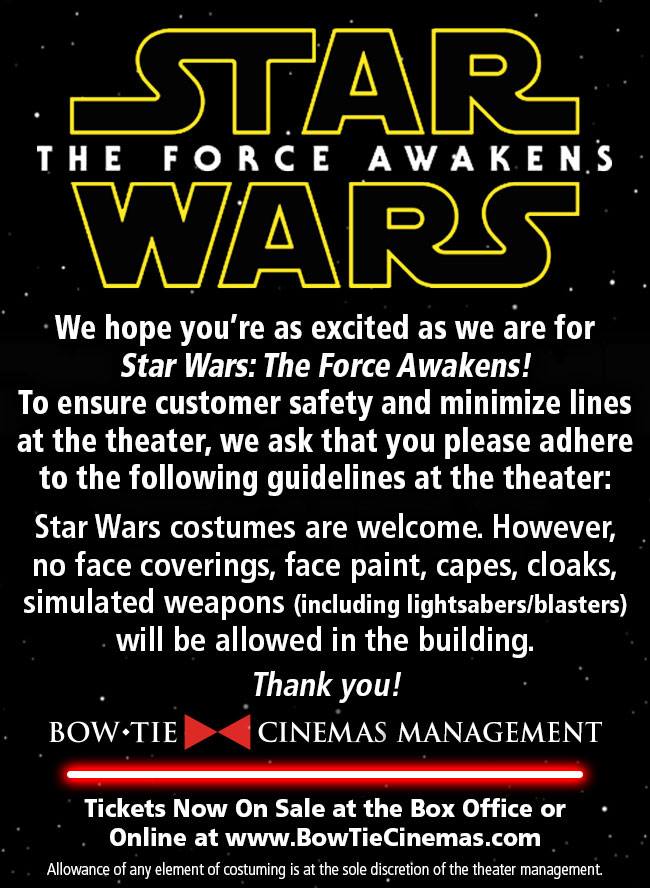 ‘Star Wars’ fans leave your mask and cloak at home, RVA theaters crack down on costumes

It looks as though hardcore Star Wars fan won’t be able to get as decked out in their best costumes, masks, or tote along too many other gadgets as they had hoped to the screening of the revival of ev

It looks as though hardcore Star Wars fan won’t be able to get as decked out in their best costumes, masks, or tote along too many other gadgets as they had hoped to the screening of the revival of everyone’s favorite sci-fi flick, “Star Wars: The Force Awakens” coming out this Thursday.

Many movie theater chains across the county are restricting what can be worn and brought into the theater with some even banning certain items.

Cinemark, AMC, and Bowtie Cinemas have all either put out statements on their websites or put something on their movie posters about what can and can’t be worn into the film.

“AMC does not permit weapons or items that would make other guests feel uncomfortable or detract from the movie-going experience. Guests are welcome to come dressed in costume, but we do not permit masks or face paint. In short, bring your lightsaber, turn it off during the movie, and leave the blaster and Darth Vader mask at home.”

After the Aurora tragedy, AMC posted the following to their Facebook page in 2012:

“AMC Theatres is deeply saddened by the Aurora tragedy. Movie going is part of our social fabric and this senseless act shakes us to our core. We’re reinforcing our security procedures with our theatre teams, which we cannot discuss in detail for obvious, safety reasons. Local law enforcement agencies, our landlords and their and our local security teams are stepping up nationwide to ensure we provide the safest environment possible for our guests. We couldn’t be more grateful for their collective support.

At this time, our show schedules circuit-wide will not change. We will not allow any guests into our theatres in costumes that make other guests feel uncomfortable and we will not permit face-covering masks or fake weapons inside our buildings. If guests wish to exchange or refund any tickets, we will honor our existing policy and do as our guests wish. We are taking necessary precautions to ensure our guests who wish to enjoy a movie this weekend can do so with as much peace of mind as possible in these circumstances.”

The chain has 348 theatres across the United States.

Cinemark has 334 theaters in 41 states and noted that Star Wars-themed costumes are welcome, but face coverings, face paint, simulated weapons (including lightsabers/blasters) will not be allowed. The Texas-based chain is the third largest in the U.S.

Bow Tie Cinemas, which has three locations in Virginia and two locations in Richmond, has put out a press release that costumes are allowed into the film, but face paint, masks, capes, and cloaks are banned. Simulated weapons (such as lightsabers) are also prohibited. This looks to be the most restrictive out of all the chains.

Regal Cinemas, the largest movie theater chain in the country, responded to a tweet earlier in the summer from a fan that asked about costumes, and Regal responded that costumes are fine, but masks and “weapon-like props” aren’t allowed.

Calls to Bowtie and Regal Cinemas were not returned.

With the movie theater shooting in Aurora and more and more mass shootings occuring at colleges and other areas around the country this year, it makes sense for movie theaters to take some extra precautions, but there are going to be some disappointed Star Wars fans this Thursday.

Tickets are still available at Bow Tie for Star Wars: The Force Awakens for the Thursday showing.