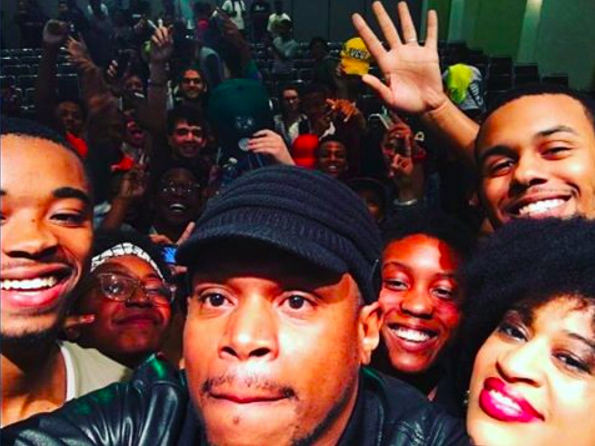 Sway Calloway, of Sway in the Morning fame, paid VCU a visit this past week, along with actress Kaili Turner, during a showing of the independent film, The Cycle, which he Executive produced.

Sway Calloway, of Sway in the Morning fame, paid VCU a visit this past week, along with actress Kaili Turner, during a showing of the independent film, The Cycle, which he Executive produced.

The screening aired in VCU’s Commons Ballroom, and was organized with the help from The Office of Multicultural Affairs, The Cheats Movement, and The Afrikana Film Festival.

The Cycle tackles the ever present issue of blue on Black crime, honing in on the vicious trend of young, unarmed Black males being killed by members of the police force. Director Michael Marantz gave this familiar theme a different lens by making the officer guilty of the murder Black, the same as the victim.

“It would’ve been easy to put a white actor on the screen,” Calloway said. “But he [Marantz] made him Black to make you think.”

Police brutality, especially the more recent cases shown in the media, are often shown as issues that are racially charged. I.e. White cops killing Black and Brown people. But Sway and The Cycle suggested the reality was flaws cemented in the US justice system, even though minorities are indeed disproportionately targeted when it comes to excessive force.

While many discussions exist regarding the origins of the uniformed police officer, the unarguable truth is that the real culprit lies more with the system and less with the individual cops.

Turner broke it down for the audience during a talkback session following the film screening and said, “It’s in the procedures. They tell you that you have to stop these people, during these times, in these areas, and people just do as they are told.”

The Cycle has only been shown to a select few locations by Calloway and his team (“under the radar” as he said,) and he found it especially important to visit VCU. The broadcast journalist spoke about his gravitation towards college campuses, and said “I think college minds are extremely fertile […] I think college minds are extremely valuable right now.”

Calloway blamed the freedom millennials have as part of the reasoning for our progress. “[College minds are] present, in tune and connected in a way that people who have gone into the work force and gotten shackled down by routine and paying bills aren’t,” he said.

Turner agreed with Calloway’s testament to the carefree attitude of the younger generation. “They’re young and they don’t know any better,” she said. “Even the ones that do still go for it. I love it.”

Both speakers went on to talk about the weight young people hold when it comes to movements, both separately mentioning The Black Panther Party. “If you look at the movements started by people of color,” Turner said. “A majority of them were started by younger people, and [some] on college campuses.”

Both Calloway and Turner have personal ties to the subject matter tackled in The Cycle.

Calloway grew up in Oakland, California, blocks away from where Oscar Grant was murdered. Grant, a 22-year-old unarmed black man, was pinned down by an officer at Fruitvale Station, and shot in the back and killed for resisting arrest. “My elementary was right off of Fruitvale,” said Calloway. “That was the station I used to use growing up.”

Turner considers herself an activist and said she was “very passionate about people of color and the injustices we have to deal with on a daily basis.”

“from the micro-aggressions to the Eric Garner’s and the Trayvon Martin’s,” she said.

The actress also said, in addition to being a woman of color, she is also a Black mother, and that is what drew her to the film. She spoke of how the realness of the content led to both her break down in the audition room and her subsequent landing of the role.

“That’s every mother’s worst nightmare,” she said. “That’s [crying in the audition room] is the worst thing you can do, but he [Marantz] wanted it lived, not acted.”

Turner has decided to take the lack of discussion around race issues into her own hands by starting a collective of artists in New York called Colors of Community. She’s invited writers to submit works based on social issues, and holds staged readings followed by group discussions led by a panel of neighborhood residents and council members.

“We have such a loaded and layered history here, it just breaks my heart,” she said. “What can we do as artists? How can we reach an understanding? How can we start a dialogue?”

Calloway agreed with the actress saying in order to fix the wound that is systemic racial injustice in America, we first have to sit down and openly discuss the issue. He said this need for dialogue is what inspired the talk back sessions after screening his movie.

It was meant to spark, “[…] solutions and suggestions for what can we do as a community to improve our own situation, and not be so reliant on local, state, or national government,” he said.

He went on to refer to the inequity in America as, “Psychological shackles […] seeds that have been planted for centuries, and [have led] to the dysfunction in law.”

According to Calloway, The Cycle aims to, “[…] trigger a conversation that’s necessary now in our communities […] to get us talking and thinking about the disparities between police and community members.”

Calloway continues to spread his message with screenings of The Cycle around the country, keep up with him on twitter here.