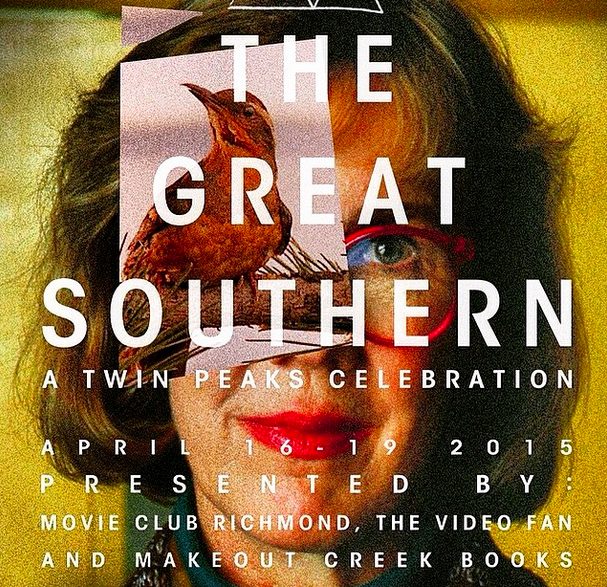 This weekend, 25 years later, Twin Peaks fans can come together to celebrate the anniversary of the cult classic ABC show with Richmond’s own Twin Peaks festival: the Great Southern.

The pilot episode of David Lynch’s hit TV show aired for the first time on ABC April 8, 1990. The crime drama follows the murder of Laura Palmer, the FBI agent who comes to town to solve the crime, and the collection of weirdos who populate the unique town.

Blossom was originally introduced to David Lynch’s work with movies like Eraserhead and Elephant Man.

“I was a big video store kid and so I would go find what try to find as much as possible and the weirdest stuff and the coolest stuff,” he said. “I listened to what the video store clerks were telling me and I got into David Lynch that way.”

Eventually, he rented the VHS set of Twin Peaks and got hooked.

“It was a very influential show to me,” Blossom said. “It was one of those things that stuck in my brain after that first time and I’ve been thinking about it ever since, which is now, you know, for the majority of my life.”

Last summer, Blossom and his girlfriend went to North Bend, Washington for the internationally attended Twin Peaks Fest, an aptly named festival celebrating the show in the very town it was filmed.

“We had long discussed going to the Twin Peaks festival in North Bend, but we never had actually gotten the courage up to do it,” he said. “And we decided if we were ever going to do it, it was now. It would be 25-years-later from when they filmed that scene and when they actually said those words when they were making it.“

Blossom said it was an “almost overwhelming experience in a very positive way,” and it became the driving force and theme for the next issue of his magazine, Makeout Creek.

Blossom spoke with his Movie Club colleague Anna Wittel about how they could commemorate their favorite show’s 25th birthday and the early workings of what would become The Great Southern began.

First it involved a screening of Twin Peak’s pilot episode, then they tacked on a costume contest and other events until they had a weekend full of events to make up the festival.

“We didn’t even really mean to come up with the idea, we were jus talking,” Blossom said laughing.

Among the ideas for festival events, Blossom had met Brad Dukes, author of Reflections: An Oral History of Twin Peaks, at the North Bend Twin Peaks Fest.

Dukes will travel from his home in Tennessee for a book signing and Q & A at Chop Suey Books on Friday, April 17 at 7PM.

Dukes, himself a rabid Twin Peaks fan, created a website documenting obscure filming locations from the show and sharing it with other fanatics.

The success he had with the project led to interest and opportunities from the show’s cast members and production staff.

“It seemed like anybody who had worked on the show had interesting stories to tell,” Dukes said. “And I mean, it didn’t matter if it was Kyle MacLachlan or someone who was sweeping the floors. They all experienced something special and I think that’s kind of what drew me in to kind of make a whole book about it.”

Dukes was around 9-years-old-when he first watched Twin Peaks, but the age gap didn’t stop him from falling in love with it. He believes the sometimes-wacky, but consistently gripping crime drama stands the test of time like bands twice as old.

“I always like to compare Twin Peaks to the Velvet Underground,” Dukes said, “where it wasn’t – well, it was pretty insanely popular at the time – but as time goes on I think it inspires more people to create art, not just in television but in music or painting and so I think it just inspires people and it continues to ask questions.”

Dukes said he is willing to travel to Twin Peaks festivals purely out of love for the show and being able to discuss its mysteries and greatness with other fans.

“The characters were just so timeless and I think viewers could just identify with a lot of those characters,” he said. “I think it just keeps hanging around in people’s consciousness and it’s still significant and that’s why people are still celebrating it.”

Blossom echoed these sentiments and added the strength of the writing, acting and filmography to the list of reasons Twin Peaks is still so popular.

“The quality of the production and the care put into it was top notch and it has endured for that reason,” Blossom said. “If you watch it now, the filmmaking is breathtaking, even in the episodes that people remember as being quote/unquote bad. It’s a terrifically made show.”

He also said the central murder mystery of Laura Palmer and the world that Lynch created is still fascinating for fans to talk about.

But Blossom did not design the Great Southern in such a way that only true Twin Peaks fans could enjoy it.

“We wanted to make it as much about being in Richmond and celebrating Richmond businesses as it was about celebrating Twin Peaks,” he said. “There’s such a positive energy in both aspects coming into the festival.”

Even without the Twin Peaks ties that North Bend has, Richmond has responded enthusiastically to hosting the Great Southern. Blossom said every individual and local business he asked said ‘yes’ to helping out.

Blossom has even procured actresses Kimmy Robertson , who played Lucy Moran, and Charlotte Stewart, who played Betty Briggs to participate in some of the upcoming events.

Kicking off the fest Thursday April 16 will be a ‘Happy Generations Happy Hour’ at Portrait House, and the four day festival will feature music, food and drink specials, guests and of course movies.

Most of these events also happen to be free, except for places like the Byrd and Strange Matter where they would normally charge you an entry fee.