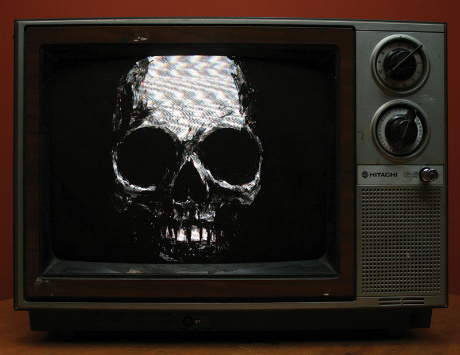 After Life: A Skull Exhibition

Noah Scalin has a big thing for the 22 bones that make up your head.

Noah Scalin has a big thing for the 22 bones that make up your head. His love for the visual beauty of the skinless noggin spawned the Skull-A-Day project, where he made a skull every day for a year out of almost every material known to man. In 2008 his book, Skulls, showcased 150 of them and soon you’ll be able to see more than 100 of these creations on display at Quirk Gallery.

Parker: What was the hardest skull to create and why?  The easiest?

Noah Scalin: Hardest can be measured a few ways. In terms of sheer time the Latch Hook Skull (161) and the Cross-Stitch Skull (258) took around nine hours each to complete. That’s nine hours in one day, not over the course of months. So what should be a relaxing pastime, becomes more like factory labor. I think the Latch Hook wins for hardest in that category since it gave me a migraine and I had to take a nap in the middle of the process so that I could keep functioning! In terms of physical effort the Plumber’s Skull (237) was a serious workout since pipes really aren’t supposed to be put together that way. I was forcing the pieces together with a pipe wrench and good old elbow grease and I got a lot of metal splinters in my hands in the process.  And in terms of coordinating, the Group Skull (364) took the most effort. I put out a call for people to participate weeks in advance and sent several reminders, but on the day itself I had no idea how many people I’d have to work with. With the help of a couple of assistants, I used walkie-talkies and shouting to arrange the very patient folks that were there in the heat on an early Sunday morning slowly into form.

The easiest was probably the first. There were no expectations, there was no audience, and I had no need to top my own work. It took maybe 15 minutes total to make and post! Little did I know what that small action would cause.

What’s been the biggest change for you personally in direct relation to the Skull-A-Day project?

I’m working with a large audience. In the past my fine art was only seen by gallery goers in Richmond and a few other places. Now I have an international audience paying attention to what I do! It’s a great responsibility and I really do my best to keep people engaged in the project rather than just let it ride on its own merits.

People are creating skull artwork and sending it to you on a regular basis. How have you seen the project affect other people?

There have many unexpected effects of the project. Right off the bat, people were telling me that my project inspired them to start their own daily art projects. As an artist, I feel like there’s no greater honor than knowing that others have been inspired to be creative because of you. I’ve heard about several people using the project and book in children’s art classes (both here and abroad) to encourage creativity, which is fantastic. And probably the most amazing result is that the book is being used by librarians across the country to get teenagers who aren’t interested in reading to engage with books. This may seem odd, considering the book is mostly photos, but sadly there are a lot of young people who aren’t opening a book at all. If one kid out there discovers the joy of reading because of my making skulls, it makes every moment of it worthwhile.

If you could own the skull of anyone who would it be?  Where would you keep it?

Ha! Maybe Einstein’s because it housed such an amazing brain. It would have to go on my mantle for everyone to see when they came into my house (it would fit in well with all the other skulls already there).

Is the After Life show going to be the first time you’ve had 100+ of the pieces on display in one room?  There are some new ones too, right?

Yes, that’s correct – outside of my house, that is. In addition to the original pieces, including some that were not meant to last and have changed over time, there are five new large pieces which are extrapolated from skulls that were in the project. I worked with several local businesses, and one in California, to create objects that would not have been possible to produce in a single day as part of the original project.