Forecast has crafted an exhibition that is both relevant and beautiful, hosting six world-class artists’ work addressing similar problems in vastly different mediums. It investigates the geopolitics surrounding human impact on landscapes around the globe. The show closed up shop this past weekend, but we’ve got details on the ins and ours of this diverse collection.

Forecast has crafted an exhibition that is both relevant and beautiful, hosting six world-class artists’ work addressing similar problems in vastly different mediums. It investigates the geopolitics surrounding human impact on landscapes around the globe. The show closed up shop this past weekend, but we’ve got details on the ins and ours of this diverse collection.

Heffernan creates fascinating historical paintings investigating complex narratives while employing special illusionism to create foreground, middle ground, and background; three realms in which she can play out the ramifications of a particular story or set of experiences.

Julie Heffernan- Self Portrait as the Other Thief, 2014, oil on canvas (detail). #julieheffernan #vcuandersongallery #vcuarts #forecast

“I am interested in creating worlds within a single moment,” says Heffernan.

Julie Heffernan has exhibited in the Virginia Museum of Fine Arts and has become a world-renowned painter. Initially, Heffernan’s work centered on her own changing body and psyche and followed her progression from early sexuality through motherhood.

Her work has recently shifted to a focus on the relationship of the self, psyche, and body to the earth. She has cited environmental issues as the most important problem in need of serious dialogue and address in the modern world, saying, “It’s foolish for anybody with either money or talent or influence not to be dealing with this—-it’s clearly the most important issue of all.

“It trumps everything from malaria to poverty—-we have time to fix other problems. With this, we’re running out of time.”

Whereas some artists involved in the show undertake months of research before they begin creating, Heffernan prefers to do research after she has the initial concept and forms of the piece down.

“I basically make a space and conceive of the situation pre-research.”

She searches for forms which metaphorically describe a state of mind and the predicament we’re in. She tries to create a space describing this and strives to construct forms acting as a kind of character within the space, and then delves into further research to flesh out her ideas.

Heffernan spoke of the curatorial choices made in the exhibition, stating it is difficult to bring a group consciousness together in a way that segues with enough clarity to come to a cohesive conclusion.

The exhibition seamlessly differentiates between the different visions of the artists, connecting different kinds of research and execution and create a cohesive body of somewhat disparate work.

Mark Dion, who creates a variety of different types of work concerned with the culture and nature and the history of natural history, describes the artists involved in Forecast as “a group of makers that any artist would be proud to be associated with.” Dion has stated that he wishes his work to engage different kinds of people from all different backgrounds, saying there must be an entrance point for all audiences within the work. “Humor is often the key to that entrance,” he says.

Blane De St. Croix, an artist who uses research-based work founded on iconic geopolitical landscapes, states that a lot of his work is about conversations within the general public founded on issues raised by those landscapes. St. Croix says, “I look for conversations where I feel like the dialogue hasn’t been truthful or has been avoided or broken down to too simplistic terms by politicians.”

Dion has a similarly confrontational view of art, stating, “Art should piss people off, should go against the grain of culture. It is not a place of comfort and affirmation but rather the site to challenge convention and assumptions.” Dion is clear, elaborating that this doesn’t mean art must be reactive or contain a shock factor, but that there are subtle and intelligent ways to confront dominant ideologies within art.

De Croix’s work is heavily research-based, with much of his time spent doing on-site research of the landscapes he works with. “I have to go to a location; sample, feel, interview people and really investigate the many sides of what I want to talk about.”

The piece De Croix included in Forecast centers on his research in the Arctic Circle. In his piece “Dead Ice,” a sculpture made from aqua resin, eco-epoxy, and recycled material, De Croix uses imagery from abandoned old towns in the Arctic Circle that were originally established for oil.

However, they have now become artifacts of attempted human intervention in the natural world. Near these towns, De Croix discovered old, wooden hulls of cargo shipping vessels that were abandoned along with the towns, the shape and materiality of which intrigued him to create “Dead Ice.”

“Dead ice” is a term connected to the idea of a glacier as a living thing. It refers to a living glacier shedding and pushing off ice from its side that then absorbs dirt and minerals and becomes “dead” or “dirty” ice.

The sculpture fills an entire room, measuring 24’x11’x7.’ The form employs the same minimalist language of Richard Serra and Donald Judd with the added complexity of painterly texture on both sides of the sculpture.

Though the artists are dealing with similar subject matter, their work functions completely independently of the work surrounding it. The work takes many forms; some is installation based, some is object based, some is painting. However they are all woven together with the clear, pointed vision of curator Ashley Kistler.

Adriane Colburn (Top Image) discusses the strong curatorial aspect of the show, stating, “I found this to be a show that has a lot of nice relationships between the works. It had a really nice thread running through the whole thing.”

Colburn shares the research-based process most artists in Forecast do, and spent time with teams of scientists during her travels through the Amazon along with her collaboration with scientists in their lab the Carnegie Airborne Conservatory in Stanford. “The process that both scientists and artists go through are similar; they’re both really creative fields. They’re just different ways of interpreting data. Even some of the tools we use are the same,” says Colburn.

Colburn’s piece included in Forecast has been specially fit to the Anderson Gallery in terms of gallery size and lighting. The piece is composed of cut paper and collected materials from her scientific exhibitions. After installing the piece in different locations five other times, Colburn says the version in the Anderson is her favorite.

The show is set apart from other environmental exhibitions because of the small size and clarity of curatorial vision. The interplay between the work within the exhibition is crafted beautifully and allows enough time and space to each artist to appreciate them fully while also creating fertile ground for valuable, internationally-informed discussion about environmental issues facing the world today. 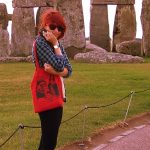