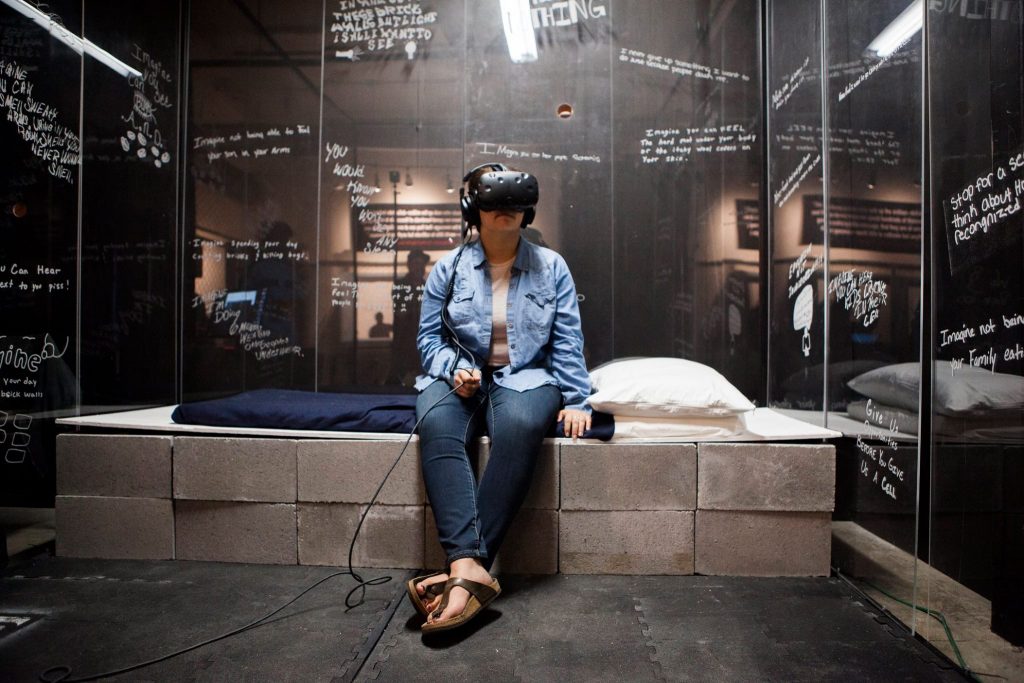 How would you feel being confined to a tiny, dark, and isolated jail cell?

Atlas, ART 180’s center for teens, intends to give you a glimpse into what that experience is like with their latest exhibit and installation, “My Reality”, which opened last Friday.

Created by teens in the program, “My Reality” is an immersive virtual reality experience which places attendees in the shoes of incarcerated youth to hear their stories, see their artwork, and share in their experiences with the juvenile justice system.

The minute you put on the virtual reality headset, you are immediately sent to corridors of the lifelike looking digital cell. A prison cell slightly larger than a walk-in closet consisting of; a bed, a toilet, and a locked door. The stay mimicked the claustrophobia one would experience in a cell and I spent the entirety of the session hoping the door would open – which it didn’t.

Your entire three- minute stay – which felt much longer, to be honest – you are enclosed in the room and hear the narration of the teens who were incarcerated by the Richmond juvenile justice system. Each teen would tell their story and I couldn’t help but be moved by their stories. One kid, in particular, has been locked away for 7 months for a mistake without any trial.

The goal of the exhibit is not necessarily to solve juvenile delinquency and youth incarceration overnight, but it is just to get the viewers to think about what they saw, and what they felt.

It does intend to lead viewers to consider lending a helping hand, or even just change their perspective the next time they run into a teenager that has been condemned by society because of the color of their skin or the area they live.

“Putting folks in large correctional facilities actually creates worse outcomes, actually leads to recidivism and particularly for youth it can be very traumatic,” said Rachael Deane of the Legal Aid Justice Center, the organization who worked along Art 180 for this exhibit to become a reality.

Juvenile delinquency is a large problem in the state of Virginia, the total amount of juveniles in custody in is 1,563 (188 per 100k) (2013) making it 18th in the nation and higher than the national average of 173(per 100k). Unsurprising, this is more common in low-income areas and unfortunately young black males are usually the target as a result of these situations. The black to white ratio of juvenile imprisonment is 5:1, with Virginia’s numbers being 506 in custody compared to the 93 white youth(2013) according to The Sentencing Project.

To emphasize these stats, the walls of the ART 180 gallery are covered in art either made by the incarcerated teens or was inspired by their circumstances, some with short stats and blurbs about youth incarceration. According to ART 180, it costs over $171,000 to incarcerate one child for one year in Virginia and $14,000 is the amount spent to educate one child for a year at Richmond Public Schools.

Art 180 artists directly worked with youth to help them channel their inner frustrations into something more creative for the “My Reality” exhibit.

The exhibit, which is #PerformingStatistics 3rd annual, was created in partnership with RISE for Youth (a bipartisan coalition a part of Legal Aid Justice Center), Scenic (a virtual reality content studio based in New York City), and artists Kate Deciccio, Roscoe Burnems, Catherine Komp and Mark Strandquist.

“What I did was take them through workshops, we would come in have a warm up, have a casual conversation just to know the guys, then we’d watch a video or poetry performance and from there we’ll just spark up some dialogue it was really just trying to get these guys to understand themselves a little better and the world around them a little better,” said Roscoe Burnems, a “My Reality” contributor and local poet.

This dialogue is what became the audio during the virtual reality experience. The choice to incorporate virtual reality into the exhibit was a no-brainer, as the technology it made for a powerful and novel narrative that one couldn’t experience from any other medium.

“We’re always trying to use art to work with people to understand not only what youth go through in the city, but what their potential is, and so that’s really about stepping into someone’s life and stepping into their shoes, and virtual reality is an amazing tool for that,” said Mark Strandquist, Creative Director of ART 180’s Youth Self Advocacy Through Art program.

“We literally can’t bring 1000s of people into a prison cell and make them know what it’s like to know what be there but we can for a few minutes virtually bring them there and have you understand from the teens perspective,” said Strandquist.

Not all of the teens were on board immediately with making art given their background according to Burnems.

“There was a kid who seemed not totally against the project but kind of like, ‘oh whatever, I’m gonna do what I want to’, he didn’t really care about poetry and none of that stuff, A few weeks in, he was helping lead the discussion and completely invested in it,” said Burnems.

We were all kids at one point and some of us still are and we know kids mainly just want to have fun, if their basic needs aren’t even met, something as simple as having fun is placed on the back burner. Gina Lyles, Program Coordinator for Self-Advocacy Through Art at Art 180 said it comes down to diverting funds to community-based efforts to engage youth.

“They(underprivileged youth) don’t have a lot of community-based support, things that steer towards youth development,” said Lyles. Lyles herself had been previously incarcerated as a kid and has since dedicated her life to prevent underprivileged youth to head down the same path she once walked.

“It’s all about funding, that money that the state is using to incarcerated youth could be put towards more community-based alternatives such as; mentoring, workshops,” said Lyles.

ART 180 specializes in one of these alternatives, inspiring youth year-round by using art to give them an opportunity to express themselves and keep them from problem behavior.

“That’s what community-based support looks like to me, keeping a kid close to home and giving them the resources they need it is an alternative to incarceration, we can stop the part of them actually committing crimes if we help support them and give them what they need before they commit a crime and go to jail,” said Lyles.

Beyond the virtual reality installation, the exhibit will include photographs, poetry, immersive audio installations, as well as take-action station will be present for those looking to get involved in local juvenile justice reform campaigns.