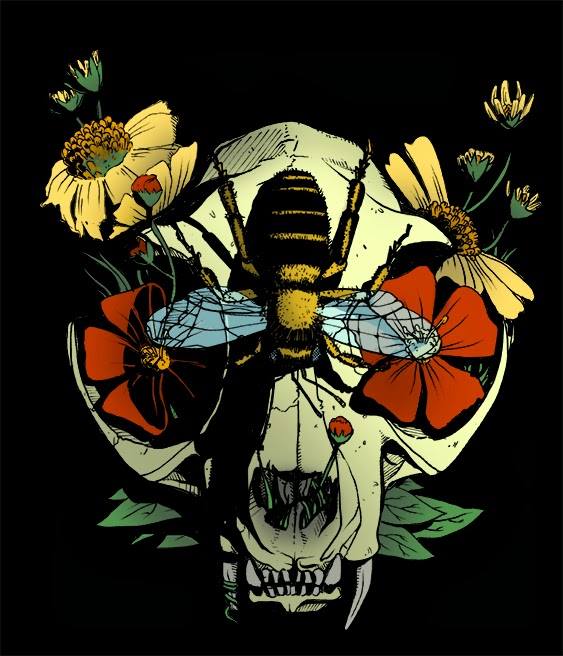 Bizhan Khodabandeh has a lot on his plate. During the day he works at the Department of Communication Arts at VCU. He was just featured in two separate exhibits at Gallery 5 last month, and recently won the silver medal for the Society of Illustrators Comics and Cartooning Annual in New York. Now for his latest project, he has started a Kickstarter campaign to fund Outdoor/Indoor, which is described as an infinite canvas comic.

Bizhan Khodabandeh has a lot on his plate. During the day he works at the Department of Communication Arts at VCU. He was just featured in two separate exhibits at Gallery 5 last month, and recently won the silver medal for the Society of Illustrators Comics and Cartooning Annual in New York. Now for his latest project, he has started a Kickstarter campaign to fund Outdoor/Indoor, which is described as an infinite canvas comic. “It’s basically a comic that could hypothetically utilize the page almost as if it could go forever,” Khodabandeh says. “It’s not interrupted, so [from] panel to panel, you’re reading either left-to-right or up-to-down, or have parallel narratives that are actually visually parallel.”

The infinite canvas is something Khodabandeh has created by working with Mark Luetke, a fellow comic book artist, who has done the coding for the project and currently works at VCU as well. Together, they have created something unique. One of Khodabandeh’s major influences is Scott McCloud, who has written about the idea of an infinite canvas comic since the ‘90s. With McCloud’s theory in his head, Khodabandeh took that and tweaked it just slightly. “What we’re doing with infinite canvas comics is a little different. Usually they’re just one giant image, but what we’re trying to do is to make it post-based, so hypothetically you could gain a following.”

Khodabandeh hopes to create a version of the infinite canvas that could be used for a longform, serial work, like a web comic. So far, he says, he’s seen a couple different types of post-based infinite canvas comics, but unfortunately they’re not available for download to the public. He plans for Outdoor/Indoor to be available as a free download.

Outdoor/Indoor is about two cats living in very different situations. “The comic is about the two different experiences in this day that these two cats have; one that’s outside, one that’s inside, so outdoor/indoor.” Khodabandeh also sees pets as something “everyone can relate to.” “Everyone is a little curious to what their lives are like, outdoor and indoor,” he says.

While the title phrase is usually written “indoor/outdoor,” Khodabandeh says there’s a reason behind his reversal of the word order. “The reason I inverted it is because, being the nerdy designer I am, I liked the fact that the outdoor cat is on the top half of the comic and the indoor cat is on the bottom half of the comic. I wanted to be able to have the title reflect that visually, so outdoor/indoor worked better visually as a title or logo for the book.”

Its this unique structure that benefits from the use of the infinite canvas technique Khodabandeh and Luetke have designed. “It’s actually a narrative where the two experiences happen one on top of the other as you’re scrolling from left to right,” Khodabandeh explains.

He and Luetke hope that once this design technique is made available to the public, more people will make their own infinite canvas comics without having to know how to encode the process. As Khodabandeh points out, not everyone is a programmer, including him. With comments and social media sharing enabled, the Outdoor/Indoor comic will be able to function similarly to a blog, with the relative ease of updating that blogging implies.

In light of the plan to release the comic for free, funding for the project has been an issue. The current goal is $6000, and just over $3000 has already been donated. With a May 18th deadline, time is dwindling. Khodabandeh recognizes that the project’s appeal is not universal. “This project is very particular to a certain type of audience, because comic books are kind of a niche to begin with, let alone infinite canvas comics,” he explains. “There’s a few out there… but it’s been in the experimental process more than anything.”

However, while Khodabandeh holds a lot of titles–graphic designer, political activist, illustrator, etc–his work on Outdoor/Indoor reflects his current focus on comics. “I’d say that’s the thing I feel the most passionately about,” he says.

Those who donate are eligible to receive a variety of rewards, including a PDF of the full
Outdoor/Indoor comic; a 7”X7” full color, signed archival print of the cat skull cover image; a signed copy of his comic adaptation of The Little Black Fish, an Iranian folk tale written by Samad Behrangi; four limited edition screen-printed posters; a signed copy of the full hard-bound copy of Outdoor/Indoor; and many others.

If you’d like to pledge, please visit the Kickstarter campaign page HERE. By donating, you’re helping the vision and talented efforts of Bizhan Khodabandeh come to life, which will help break new ground in the world of comics.