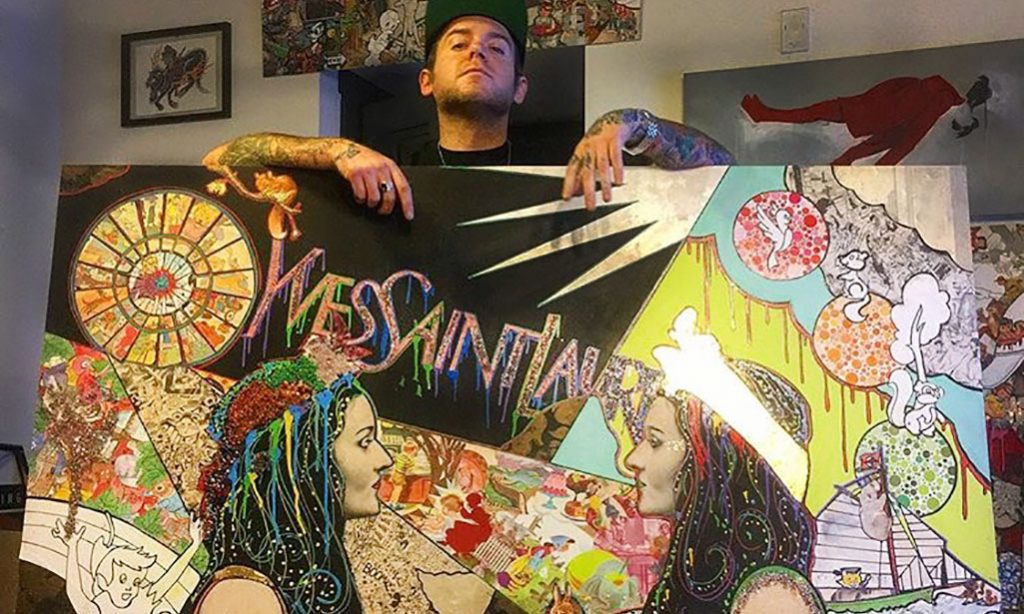 The art of Kevin Randolph Johnson isn’t made for art elitists – nor is it made for low brow, fat-walleted collectors. But sure enough anyone with a set of eyes is bound to get lost in his highly detailed creations currently on view (and sale) at Belly Timber Tavern.

Johnsons’s entry, or reentry, into art started only three years ago, but his journey started back in undergrad at VCU’s AFO program (arts foundation).

“I didn’t think I would ever be capable of doing art because all of my friends were such good artists,” said Johnson of his college peers in an interview with RVAMag. While he departed the world of physical art he diverted energy into his hip hop project, the now defunct Luggage which didn’t quite stand the test of time.

“There’s a shelf life on being a white rapper,” he admitted. Johnson is often brutally honest which made our interview all the more entertaining. Either way, a close friend noticed him withdrawing after Luggage’s lack of success so he brought over a ton of art supplies to get him out of a rut.

“I was on Facebook way too much, and he brought me a ton of art supplies, more than I would ever have bought myself,” he said.

His reentry into art was scary. He didn’t know how it would come out and if people would respond well so he spent a number of months working on his first piece.

“If people didn’t like it, they could tell I put a shit load of time into it,” he joked. 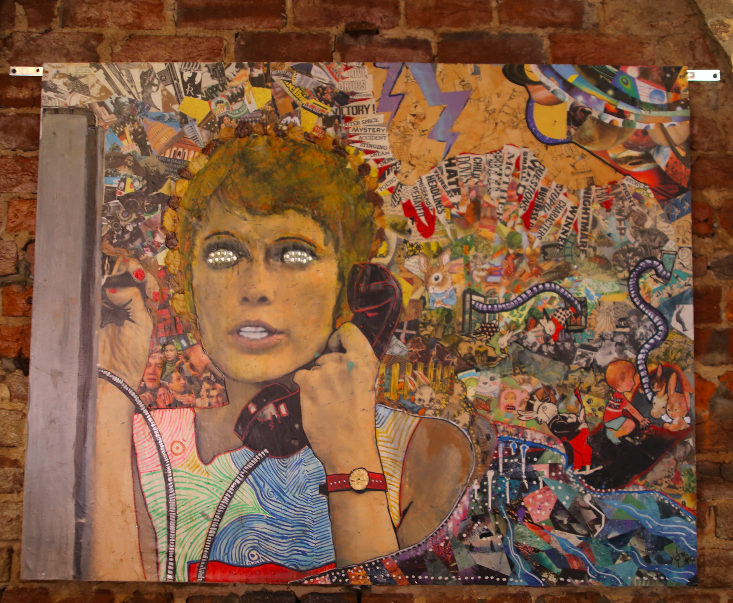 While it started as a project to keep him busy, he was aware enough that he didn’t just want to throw paint on a canvass and call it art. Instead, he invested himself in harvesting vintage and pre-depression era magazines and books. He painstakingly cuts out images from these old works and collaged them together on wood panels. He cuts them to fit, they don’t overlap, cause he thinks it looks better that way – it does create a jarringly flat image for what could otherwise be quite dense.

“I just got a bunch of Highlights books from the 60’s,” he said, noting he gets most of the old printed material via eBay in lot purchase. This cut out work takes up the majority of time he spends on a work. If a piece takes 40 hours to complete a piece, he’s spending 30 of those hours cutting and piecing together the collage.

“It’s not fun for me, its just a lot of motivation,” he said. After the collage is done, he gets to break out the paint which is his favorite part.

But those college details matter. Once piece, a portrait of the late Lou Reed, was formed by taking pages out of a book of poetry from the 1930s. Words line the famed singer/songwriters cheeks.

“I did that painting the day lou Reed died,” he said.

But beyond the intricacy of his work, there’s also the pop expression. Celebrity cut outs (like Mr. Reed) and fashion logos help add to the reliability of the often otherwise abstract work.

“I don’t want to say it classes it up, but if you look at something and it’s too trippy, you can always fall back on it having some logo you can connect to,” he said pointing to a work with the Versace logo plastered below a portrait of county star Waylon jennings. 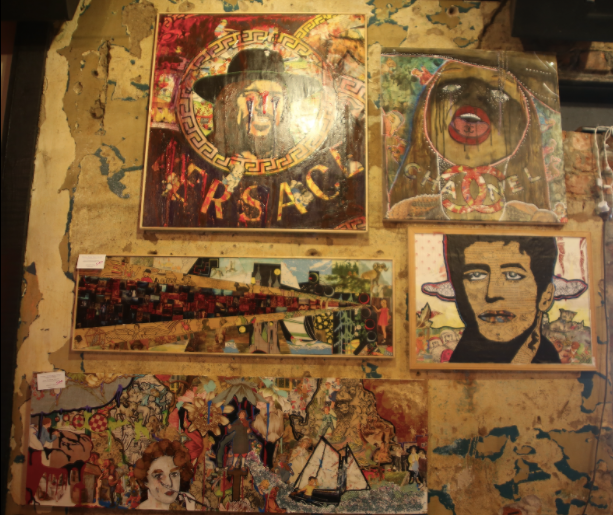 “Jennings would never wear Versace,” he said only further exploiting the absurdity of the work.

He’s actually not that down on his art, though he’s modest and humble enough to know it stands apart in the face of more classical works. But his mix of pop and iconography has yielded success and those portraits are a good example of that.

He pointed to the Wynona Ryder painting (top image) with “Steal everything,” a reference to her theft scandal, painting over top. He’s done a series of similar works; one had Lisa ‘Left Eye’ Lopes that said “Burn everything,” a nod to her burning Andre Rison’s house, then there was the Tanya Harding painting that said “Break Everything.”

“Its a lot of pre-millennial jokes so a lot of people don’t get it which is also a kind of jab at how old I’m getting,” he said, again acknowledging his self awareness.

He’s sold most of those, and he’s able to knock them out in about 20 hours. With some of those large format images he finds large scale pics and alters them down to just outlines. The “skin tone” is usually just the color of the wood he paints on after he hits it with so much glue.

All of this started as an escape from a dark point, and while you can usually catch Johnson at Helen’s on a Thursday night, he claims visual art has help bring him back from the brink.

“With music, you have to be out there and be seen and be cool or be up to date with whats going on. This is the complete opposite,” he said. “[My art] keeps me home and it keeps me sober. It’s hard to get started but once I do, 14 hours will go by and I’ll feel so relaxed.”

While his Belly Timber show might end after this weekend, he’s already looking forward to a full gallery show this July at the newly opened Myers St. Gallery at 959 Myers st. 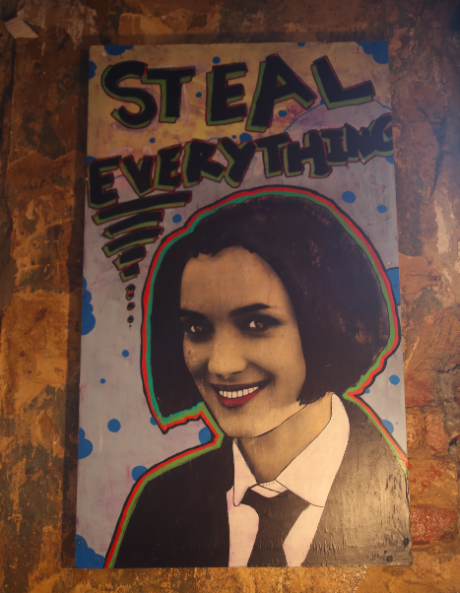 “I’m hoping to switch over and do some stuff that’s not as trippy and more soft and more pleasant to look at,” he said. It’s still going to be collage, but he’s also going to try and work with cooler colors. “I hardly use blues, I use lots of reds and oranges and yellows, but for July its going to be a lot of softer blues – cooler colors.”

And if you’ve made it this far in the article and you still don’t understand the appeal of Johnson’s work, don’t beat yourself up over it.

“I’m just like anyone else man, I’ll read through art books on the toilet for a couple hours to try and figure out what I’m doing,” he said. “But the truth of the matter is it’s just psychedelic art, and with my style, there’s a time and place to just stare at it… if that makes sense.”

Personally, I think that time and place is whenever and where ever. But that’s just me, man.

The intricate and psychedelic pop art of Kevin Randolph J...

The art of Kevin Randolph Johnson isn’t made for art elitists - nor is it made for low brow, fat-walleted collectors. But sure enough... READ MORE

The intricate and psychedelic pop art of Kevin Randolph J...

The art of Kevin Randolph Johnson isn’t made for art elitists - nor is it made for low brow, fat-walleted collectors. But sure enough... READ MORE