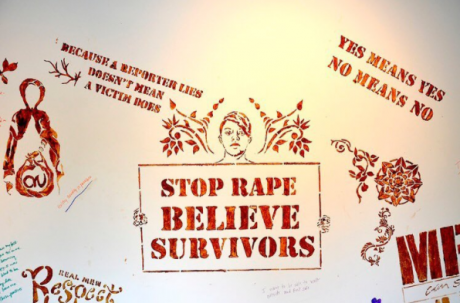 Grappling with a traumatic event, specifically sexual assault, can quite literally feel like dragging yourself through mud and for artist Malena Magnolia, she is using that as a therapeutic way to tell people’s stories.

“I love Virginia’s red clay. It’s so great. It’s so smooth and it’s in abundance,” she said in an interview with RVAMag. Magnolia, a local interdisciplinary mixed-media artist and activist, is directing and curating “No More Violence,” a series of art-based workshops for survivors of sexual violence through art therapy of multiple forms, including photography, screen printing, and Magnolia’s favorite, mud stenciling.

While attending the University of Wisconsin Milwaukee Peck School for the Arts, a classmate of hers first exposed her to the art of mud stenciling, a technique, similar to graffiti, is applied to walls or vertical surfaces, but manages to avoid using any chemicals that are found in spray paint. It helps keep the work environmentally conscious while also telling an artistic story.

“Spray paint has harsh effects on the user as well as environment, but especially the person who is doing artwork,” she said. But her favorite reason for using mud is its metaphorical significance. “One of the reasons with this topic that I really like the mud as well is it’s not permanent so it washes away with the natural elements if you put it on the side of a building.”

The idea that things, specifically trauma, are not permanent and can be easily washed away can be incredibly cathartic. Additionally, working with the earth can be very healing for many.

Magnolia’s purpose behind this project is a personal one. At the young age of 14, her father was incarcerated after molesting three of her cousins. She explains that almost every female member of her family was sexually assaulted or abused by other family members.

After her aunt stepped forward to expose her father, Magnolia was surprised by the how the report was received.

“No one believed her. Her parents, my grandparents, didn’t believe her. It kept going on,” Magnolia said.

She described how more often than not, sexual assault occurs between people who have a certain amount of trust established between them, such as family members or close friends.

“A lot of times, our fear around sexual violence is that it’s someone hiding behind the bushes,” she said. “It’s usually the case of someone you know. Someone you gain the trust of, someone that your other family members and friends would never ever think would do something like that.”

People’s initial reactions to these assertions are often along the lines of “Is that person capable of doing that? No, that person could never do that.” For a survivor, that can be a slap in the face to hear. After talking about her story publicly, more and more people — women and men alike — began to step forward and confide in her, saying they too received similar reactions.

“I really get a lot out of sharing people’s stories,” she said, explaining the significance of hearing about people’s experiences and how impactful that can be, since statistics often don’t change people’s minds.

Today’s mud stencil workshop at @gallery5arts was so much fun! So many thanks to all those who came and to @carolaolson for talking about art therapy beforehand! Y’all are amazing and we’re so much stronger together Mud Stencils will be on display at Gallery 5 for First Friday, June 2nd and you might end up seeing some around Richmond

Magnolia has received mixed messages from the public for her art. After finishing undergrad at University of Wisconsin Milwaukee, she moved to Charlottesville where she frequently collaborated with the Bridge Progressive Arts Initiative.

She incorporated historical figures, such as Sally Hemmings or Thomas Jefferson, both of whom are very near and dear to the people of Charlottesville. She explains that Charlottesville wants to maintain its history and integrity around Monticello and Thomas Jefferson, but recent events have also procured more public conversation around this topic.

The infamous Rolling Stone article highlighting the alleged gang rape on the University of Virginia campus had been released around the time Magnolia started exploring these controversial topics, but she wasn’t worried about any negative feedback with her projects. She believed that sexual assault and violence continues to be a major issue, which is why she was confident people would rally behind her and her project. And rally they did.

Her Instagram collection contains some of her most prolific work, including a piece she did outside of Crisis Pregnancy Center in Milwaukee. This center, which claims it offers medical advice and services for expecting mothers, is actually backed by Christian groups that masquerades as an abortion clinic only to condemn women who wish to make that choice.

She decided to do a mud stencil that said “Keep your rosaries off my ovaries,” with a rosary in the shape of ovaries. “When I do overt political texts like that, I’ll get more push back. More people want to know if I have permission.” Sure enough, the stencil was removed the following morning.

“Keep Your Rosaries Off My Ovaries,” Potting Soil, Milwaukee, WI

After multiple installations in Charlottesville, Magnolia wanted to bring a similar theme to Richmond and the survivors of the area. Magnolia wants “No More Violence” to be as collaborative as possible so She is asking for people to bring ideas or stencils of meaningful symbols that combat domestic and sexual violence and assault.
“It can mean whatever it means to that person.” Magnolia hopes to leave parts of these installations around Richmond for the general public to look at. She will also be encouraging people who come into the gallery to “write their own poems, stories, comments, words of encouragement, whatever, also directly next to the artwork next to the mud stencils.”

The workshop is free and open to the public, centering survivors and inviting participants to create artworks in all mediums. Along with mud stenciling and screen printing, Magnolia is collaborating with Dr. Sarmistha Talukdar, “a photographer, experimental musician, and Postdoctoral Scientist in the Department of Human and Molecular Genetics at Virginia Commonwealth University. Also as part of the exhibit, Talkudar will display “Take Your Power Back: Therapy Through Photography,” a series of double exposure photography aiming to highlight and empower survivors through powerful symbolic representation of indomitable strength, healing, self-care and inspirations for others.” The program is as follows:

Saturday, May 20, 2017, 2-5 pm at Gallery 5
Art in Response to Violence – An art therapy workshop creating art as a response to the community about interpersonal violence will be led by Carol Olson, a local art therapist and anti-violence activist. Supplies will be provided, but participants can bring their own as well.

Friday, May 26, 2017 3-5 pm at Studio Two Three
Screen Printing Against Sexual Violence – A screen printing workshop open to beginners and experienced printers. Participants are encouraged to bring a design combating sexual violence and screen print it. The image should be no larger than 8×10″ and can be brought on USB drive as a jpg or PDF or printed on transparency film. The prints will be sold during the exhibit and all proceeds will be donated to the James House.”

Malena Magnolia hopes that her art therapy workshops will not only be a collaborative art experience for people in Richmond, but also a way for domestic and sexual assault survivors to tell their story and bring the conversation into a public atmosphere.