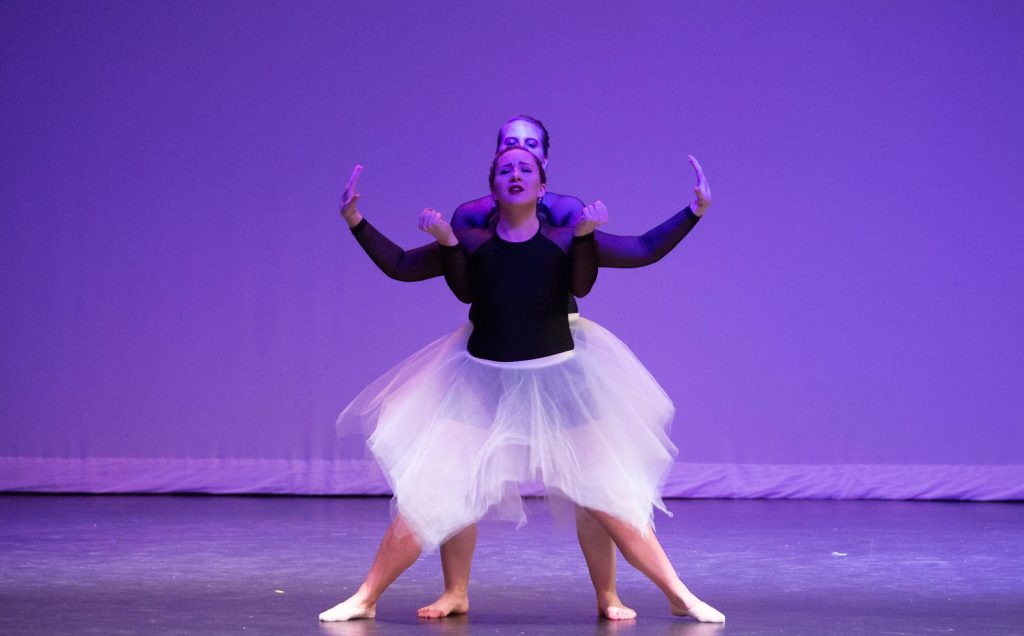 Involving dancers of all body types and embracing inclusivity and diversity, Company 360 works to make dance empowering and accessible for all.

Bailey Anne Vincent might make you cry when you see her dance company on stage.

“We do tend to go for as much emotion as possible. We tend to make people cry,” Vincent laughed.

According to their website, Fredericksburg’s Company 360 hopes to push boundaries and bend stereotypes about the world of professional dance. They’ve paid no mind to body types, and opened their doors to dancers of all abilities, limitations or not.

“Dance should not be an age, size or number,” the group says, “and Company 360 hopes to be an inclusive, no-shame environment for those passionate enough.” Their next performance, Bridges, a tribute to Paul Simon, will be performed April 26-27 at the Fredericksburg Academy.

Vincent said the company’s upcoming show will provoke a lot of emotion from the audience, and that the dancers have even cried in rehearsals after connecting to the material.

“This show follows three generations of women all having to make different choices and having to overcome being a woman, basically,” she said. “It’s not just a tribute to [Simon’s] music; it’s characters he’s hidden inside of his lyrics, or the different themes he’s stuck [in a song].”

“This show is very grounded in reality, with folklore and Americana.” In contrast, Vincent said that Company 360’s fall show, a tribute to the Dave Matthews Band, will be “pure fantasy and magic.”

Vincent aims for her shows to have one cohesive, original plot and storyline across all the pieces, even though there are very different styles being performed throughout each show. She comes up with the story and chooses the soundtrack a year in advance. While ballet is featured heavily in the shows, Company 360 primarily focuses on contemporary pieces, and also performs pointe, tap, and jazz.

Vincent started out dancing for various dance companies in Washington, D.C., even working as an assistant artistic director for some. For a while, she worked as a choreographer for Fredericksburg’s Christian Youth Theater. But she knew she wanted more.

“The whole time I was kind of quietly creating my whole list of, ‘If I had a company, this is what I would do to eradicate drama, or negative body image, etc’,” she said. Vincent had a vision for a company that was more inclusive, and would have none of the negative aspects of working in the dance world that seem to be all too prevalent.

She said she was especially concerned with how in some dance companies, women were being pitted against each other. She wanted to start a company that was different, that focused on the joy of dance and the way it can be empowering.

After a stem cell transplant, Vincent decided to finally try to bring her plans to fruition. Vincent, who has Cystic Fibrosis and is also deaf, had been on oxygen, and was constantly in and out of the hospital until the transplant. While she still spends a fair amount of time in the hospital, she says the transplant gave her a “resurgence of health.”

“That was what led me to take the leap with Company 360 because it felt like, well it’s now or never,” she said. “What do I have to lose? I’ve almost died like twenty times.”

Vincent worked with her husband, who is now the executive director of the company, to figure out the logistics of starting this venture.

“I feel like, especially for women, we have more of a ceiling to get through when following our pursuits and passions,” Vincent said. “We often feel like we have to have a checklist of certain things we have to do before we take on something.”

But Vincent challenges that approach.

In a similar way, Vincent believes in all of her dancers, even if they violate the archetype of what a dancer is “supposed” to look like. One of her original goals with Company 360 was to empower dancers of all body types to perform, and she does not consider body size or type as a factor in casting.

“[The dancers] are measured by their talent, not by their measurements,” she said. “My goal is making the audience feel something, and I think that has absolutely nothing to do with the skeleton you were born with.”

“You can make someone feel something just as much if you look like Isabella Boylston or Misty Copeland, or if you have boobs,” she said. “It makes literally no difference. And to me that’s what we’re losing in the dance world. People don’t think that dancers of all sizes can move as beautifully, and they can.”

Vincent said that while she is looking for dancers to have strong technique and training, she considers the dancer’s ability to emote and tell a story paramount when casting.

“You can tell when someone has to dance, when it’s their passion,” she said. “Not when they need to dance or feel that they must dance, but that they’ll do anything to dance.” To Vincent, it’s this quality that’s most important in a dancer. Ability alone is not enough.

“The world is full of good dancers. You watch So You Think You Can Dance and you’re like, ‘They can do eight pirouettes! How do all these people exist in the world?’” Vincent doesn’t see physical achievements like these as the best barometer of dance talent.

You go to dance competitions and everyone’s kicking themselves in the face with their leg. To me, that’s all been done.

Vincent also runs a youth company for older children and a training company for teenagers. Every dancer in the training company is paired up with an adult company dancer, whom they shadow and understudy for the season to give them a taste of a professional dancer’s life. Vincent said she really wants understudying to be a positive experience for her young dancers.

“Growing up, it was always a negative thing to be cast as the understudy. But it’s an honor, it’s exciting, it’s a privilege,” she said.

In addition to her company, Vincent has attracted a large following as a health advocate and writer. She has over eleven thousand followers on her Instagram account, where she documents her life as a dancer with chronic illness. Vincent said that because of her advocacy, people around the world who are chronically ill have connected with the company. She is currently fundraising for two women from Nashville and Texas, whom she has endearingly nicknamed the “Bucket List Babes,” to fly out to see a Company 360 show.

“They were really motivated by seeing all sorts of women represented in the company,” Vincent said.

Vincent would like to be able to continue this practice for other fans of the company, and hopes to work with local organizations to raise funds for it. She also tries to collaborate with a different nonprofit for every show. Her international following has motivated her to livestream some of Company 360’s performances, and she is sensitive to the fact that it can be expensive to be a patron of the arts.

“I want dance to be accessible,” she said.

Vincent has also worked on dance films to bring awareness to certain issues, including collaborating with rapper Everlast on a dance film called “Love With Cystic Fibrosis.” Everlast, whose daughter has Cystic Fibrosis, found Vincent through her online advocacy.

Vincent’s main goal throughout her work is to make her corner of the dance world an inclusive and positive one. She hopes this can spread to the larger dance community, and encourage dancers who have been alienated from pursuing careers in dance and achieving success.

“I’d like to think that if you’re a dancer who comes to see our show, you’re not going to feel hateful about your body when you leave, or discouraged,” she said. “Or think, ‘Why try? I’m going to give up dance,’ because sometimes that happens when I go see dance shows.”

“Hopefully, as more people come to see Company 360 shows and get lost in the story, they’ll leave and then never again have this stereotype of what they think a beautiful dancer should look like,” Vincent said. “All of our dancers are beautiful, and all bodies are beautiful.”

Company 360 will perform Bridges, their tribute to the work of Paul Simon, at Fredericksburg Academy on Friday, April 26 and Saturday, April 27. In addition to evening performances at 7 PM both days, there will be a 2 PM matinee performance on Saturday. For tickets and additional info, visit Company 360’s website.

Ginny studies English, journalism, and American Studies at the University of Mary Washington. When she's not on her crusade to save the free press, she choreographs for her dance company and consumes excessive amounts of coffee and avocados. Her ultimate ambition in life is to write for the New Yorker and own approximately twenty cats.

Hold Your Water and Head Down To Urinetown

Elliot Wegman is Anything But “Unbecoming”

Wegman's first play is also the first play ever staged at Coalition Theater, and it brings both the expected humor and a depth of human... READ MORE

Be In The Room When ‘Hamilton’ Happens In Ric...

A fireworks show at the Diamond last weekend got Broadway fans hyped for the arrival of mega-hit musical Hamilton, which is playing at the... READ MORE

Hold Your Water and Head Down To Urinetown

Elliot Wegman is Anything But “Unbecoming”

Wegman's first play is also the first play ever staged at Coalition Theater, and it brings both the expected humor and a depth of human... READ MORE

Be In The Room When ‘Hamilton’ Happens In Ric...

A fireworks show at the Diamond last weekend got Broadway fans hyped for the arrival of mega-hit musical Hamilton, which is playing at the... READ MORE