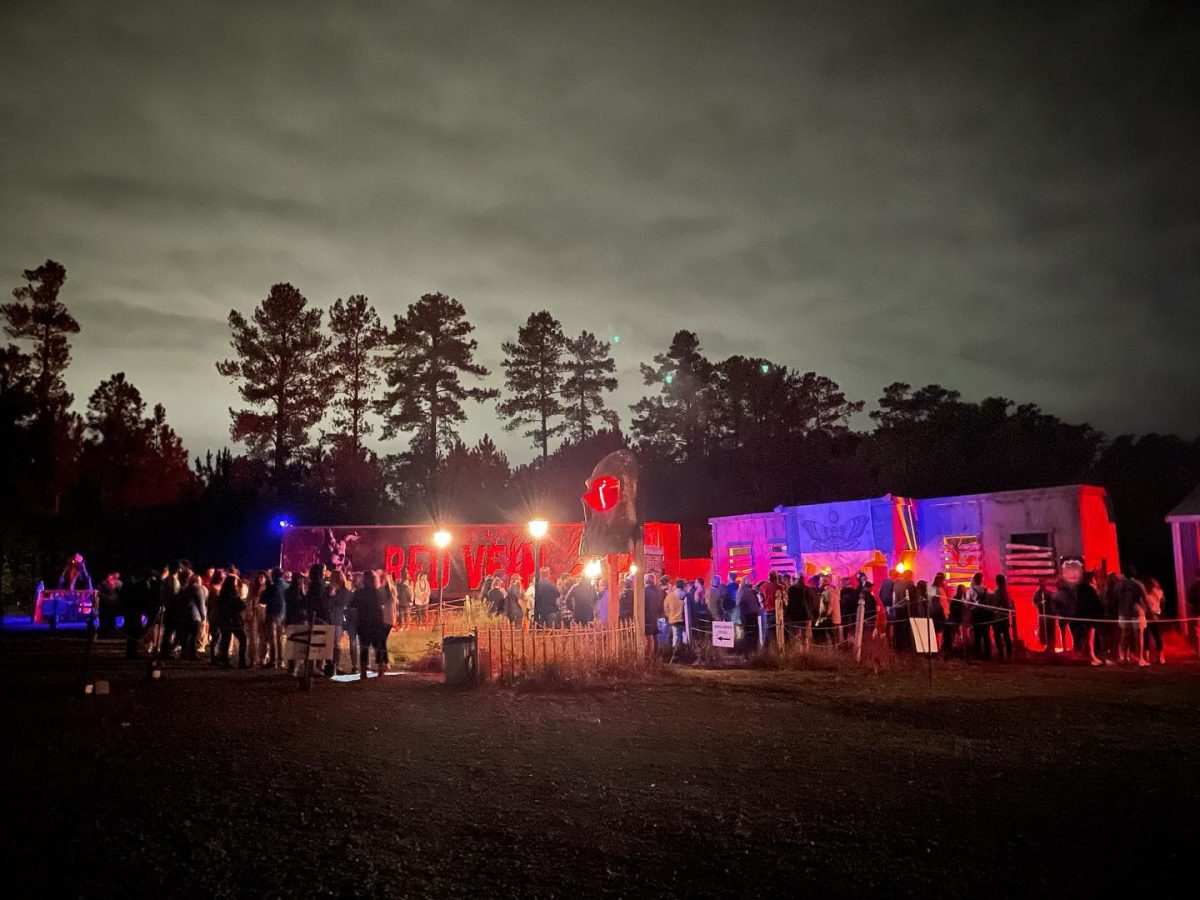 Richmonders have been both terrified and impressed by the carnage on display every October at Red Vein Haunted House. But one question has remained unanswered: Is it just for show, or is the terror real? George Wethington learned the answer the hard way.

I was out in Ashland, or Bowling Green, who cares? I was in God’s country, and true to form, he left me stranded when I needed him the most. I fought the wheel to keep steady and floored the pedal for what little life I could drain out of this miserable garbage heap. I rolled to a gradual stop.

I got out of the car and lifted the hood. I tried to use the flashlight on my phone, but the charge was too low. I slammed the hood and felt an earthquake shaking under my lungs as the magma of my unbridled anger erupted in a violent show. I punched the hood as hard as I possibly could.

I broke something in my hand for sure. I let the blood ooze from my knuckles as I closed my eyes and let the pain absorb me. I opened them to see my handiwork. I saw an imprint left by an impulsive, balding, grown child. I looked around to get my bearings.

I heard music in the distance and realized I was not too far from a dimly lit farm. I amused myself with the thought of becoming a horse thief as the smell of hay and manure made the crisp, autumn night air smell archaic. I walked past a sign that said ‘Hanover Vegetable Farm’ and noticed a few food trucks across from a red barn that had music and people spilling out of the doors. I walked up to the barn, maintaining my distance from the crowd to avoid people noticing my disposition, and my now-throbbing and swollen fist.

“Oh dear, you have to do something about this bleeding.” I felt a cold hand devoid of muscles grab my wrist. I turned to see an elderly woman with a youthful gaze in a red coat and hood. “I’m fine ma’am,” I told her, trying to reconcile the sensory dissonance. “Oh, no you’re not,” she said, in the irrefutably insistent way of an older woman.

“Well, alright, if you insist. My car broke down not too far from the driveway and you wouldn’t believe it, but punching it didn’t help. If you can get me to the E.R. so I can get this scanned I would appreciate it,” I told her. I was relaxing a bit now.

“Well, ain’t no need for the E.R. honey. Lucky for you, we have a doctor on site.” Her eyes gleamed in the moonlight. I felt a shiver go down my spine and my flesh recoil. I reminded myself to pack a spare jacket in the car in case I got stranded again. It was getting cold.

“Now you just sit right here and I’m gonna go make sure the doctor is available,” she said. I watched dark, translucent clouds sneak across a waning moon like a cat against a wall. There she was again.

“He’s gathering his things together. I’ll take you down here in a bit. You look frigid out here without a jacket. I brought you some hot cider. This recipe has been on this farm for centuries.” I readily drank the spiced, warm offering given to me.

I started feeling sluggish. The world spun, and then righted itself, and then fractured like a broken mirror. I watched a hundred red cloaked women gazing intently at me and gasped in horror as many became one. “The doctor will have you now, prepare for your ascension,” she said.

The clouds parted and the moon caught her face. Her skin sagged and sloughed from her cheeks as the maggots in her skull dumped from empty sockets. I fell asleep.

“It is so fortunate you brought him to me, Emily Redvyn. These shortsighted doctors today would have merely fixed his hand. This will not prevent him from further outbursts of anger and self-harm. We will be removing his amygdala.”

I heard this from a muffled and accented voice behind my head. I awoke strapped to a chair; a searing pain in my skull had outpaced the pain in my hand. I saw in front of me the face of the cloaked witch that brought me to what could only be an asylum.

“You are ripe for ascension, wayward traveler,” she said. I was at peace with my situation. She stroked my face with a warm and comforting hand. She took my bandaged palm and put it to her youthful cheek and stared at me in the eyes. “Don’t move,” she said. “The doctor needs still hands and still patients.”

“All done!” the doctor finally exclaimed. “Very well,” she said. The witch pointed a hand of bone down a hallway and told me to follow the path. I walked through the asylum, admiring the brilliant mind of the doctor as I saw the human anatomy reimagined. I felt a brief neural misfire of horror as I walked through a hall covered in gore, headless bodies, and the cadavers of incomplete autopsies. “You’re on your way to ascension,” I heard her voice say from everywhere.

I snapped back to the task at hand. I was met by a group of missionaries who wore signs of the death moth and asked if I was ready to transform into a greater being. Would I make the metamorphosis from this life of toil? I wanted to. I longed to join them and The Eclipse. I felt the sting of the crisp night air against my opened skull as I exited the asylum, rejuvenated by the wonders of science.

I walked then through a carnival. There were marvelous creatures, fantastic to behold in their ghastly forms. A 900-pound red-veined man gargled the praises of the prophet and encouraged me to cross my path with hers. Was I ready for the hidden secrets of the afterlife? Had I the symbols to protect me from angelic forces as I transformed? I must see her, he pleaded with me. She must teach me. I will be evil reborn.

I met the prophet Madame Bavlatsky. She clasped my opened skull and pulled me close, whispering into my eager ear the secrets of the ancient phantom lords. I felt an ectoplasmic surge of ghoulish elation as her tobacco-stained fingernails cut into my cheek. She used my blood to paint upon my forehead the dark prism. I felt the power of darkness shroud the remaining putrid light of humanity inside me. “Go,” she said. “Follow the path to ascension.”

I was pulled by demonic forces through fields of dying corn to a church. It was a small country building with a few pews and the hanging body of the priest that was here before the dark belief of The Eclipse prevailed. A wicked preacher spoke to many from his pulpit, but never broke his gaze from me. I heard the cry of a devoted congregation and looked around at my new compatriots. I and the preacher were alone.

“Are you ready to make the last revolution of this mortal coil and join us in ascension, my child?” He spoke with reverent urgency. “Yes,” I replied to him.

My soul was tired, weak, and no use to me. He led me to a baptismal font. “Your bandaged hand is a disgrace to our dark majesty, who makes all wounds. Are ye willing now to make this sacrifice and become anew?”

The strength of the witch’s brew compelled me as I accepted my conversion. I indifferently watched the preacher take a sharpened cleaver and remove my bandaged appendage. I watched my blood fill the font, patiently awaiting an unholy affusion.

“Come now child, be baptized and rid yourself of holy thoughts. Join us in the eternal battle against all that is good. Transform into a new vessel, terrible for all to behold, deadly for all to be near.”

I felt my blood drip over my forehead and down my tear ducts. I welcomed it as it covered my lips and tasted the coming afterlife.

“Go now child, to the cemetery. Lie there in the tomb of the unknowable. Upon another night you shall be renewed.”

I slept there, for what felt like lifetimes. I followed the pull of an eclipsed moon out of the tomb, the bones of my remaining digits scraping against marble. I was met by my red-hooded matriarch. The sagging flesh of her lips broke into a leering smile.

“Come now, ascended one. There is killing to do.” 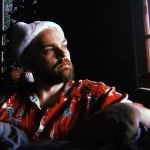