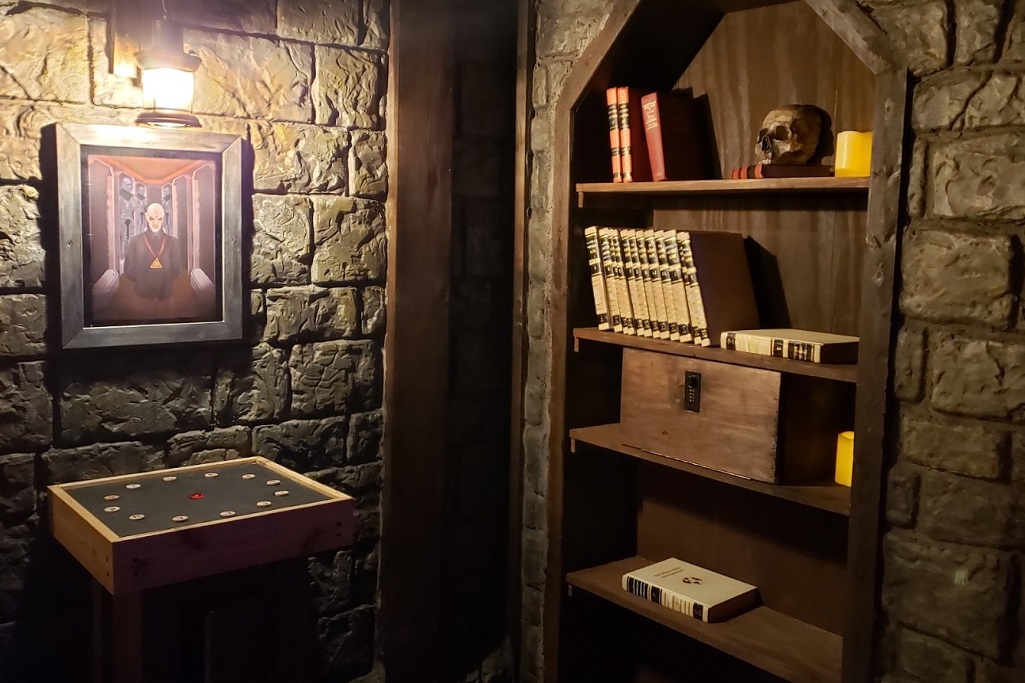 The Ashland-based troupe of haunters have expanded beyond their annual Halloween-focused activities to open Red Vein Escape, an escape room with experiences based around some classic Richmond spook stories.

Every town has a legend. In West Passaic, New Jersey, it’s the 10-mile Clinton Road; in Stull, Kansas, legend has it that the local cemetery holds a gateway to Hell. Richmond’s ghost stories run rampant due to the city’s long history, but one story has reigned supreme for nearly 100 years: the legend of an old mausoleum, located in the famous Hollywood Cemetery, that houses the remains of a vampire.

Some hear about it for the first time around a campfire, others as they walk the campus of nearby Virginia Commonwealth University, the air growing colder as the night grows near. Ryan Sligh, member of the Red Vein Army, has known about it pretty much his whole life. And now he’s made it a big part of the Red Vein Army’s latest venture: Red Vein Escape Room.

The legend itself is fairly straightforward. On October 25, 1925, the Chesapeake and Ohio Railroad’s tunnel, under Richmond’s Church Hill neighborhood collapsed, tragically burying several workers alive. In the midst of all the chaos, rescue workers spotted a ghoulish, blood-covered humanoid creature with jagged teeth and skin sloughing off of its body crouching amongst the bodies of the dead. Pursued by a group of men, the creature escaped from the cave-in and made its way towards the James River, where it allegedly disappeared into a mausoleum at Hollywood Cemetery bearing the name of W.W. Pool.

The mausoleum itself is where a majority of the vampire connections to Pool were made. This place of death may be the birthplace of the rumors that claim Pool was driven out of England in the late 1800s for being a vampire. Above the door of the mausoleum are Pool’s first and middle initials, along with his last name: “W.W. Pool.” Some, perhaps wanting to give people a spook, proposed that the double W’s resembled fangs. Combined with the various Masonic and Egyptian elements incorporated into the structure and the fact that the year of death is listed as 1913, nine years before Pool actually died (spoiler alert: 1913 is the year that his wife died), all combine to tell a pretty terrifying tale: there really IS a vampire buried deep within that mausoleum.

Unfortunately, anyone feeling an itch to go vampire hunting will ultimately be disappointed; while creepy, the truth behind the story of our undead friend is ultimately as paranormal as a toaster oven. According to Gregory Maitland, a paranormal researcher with the Virginia Ghosts and Haunting Research Society, the ghoulish looking person that somehow made it out of the cave-in was none other than railroad foreman Benjamin F. Mosby, who made the mistake of working in a steam train without a shirt on, and was fatally scalded when the boiler that he had been shoveling coal into exploded. A grotesque sight, with shattered teeth and skin hanging off of his body, Mosby ran for his life from the tunnel, later dying from his injuries at nearby Grace Hospital.

What is the Red Vein Army?

Founded in 2011,Red Vein Army (RVA) is described by Sligh as “a group of haunters who can’t quite sit still.” They began as a group traveling around to different haunted houses, usually staying at each one for around a week. In 2016, they opened Red Vein Haunted House, a yearly event at Hanover Vegetable Farm consisting of four different attractions that visitors go through consecutively: The Witch’s Plague, Redvyn Asylum, Rabbit’s Cry Field, and Providence’s Home for Wayward Children.

For the group, details are everything. The haunted house, which runs during the fall leading up to Halloween, bases their various haunts around the legend of the Ashland Witch, taking local folklore and weaving original ideas and details through it. The fictional diary of Thomas Redvyn, the missing husband of alleged Ashland witch Emily Redvyn, is available for download via Kindle. The backstories of each of these attractions intersect with each other, creating a terrifying tale that will leave you thankful that the Redvyn family isn’t real.

We’re Going on a Vampire Hunt

In August of 2019, Sligh, along with three other members of the Red Vein Army (Barnes, Andrew Powers, and David Hayworth) opened their latest Ashland-based, horror-themed venture, Red Vein Escape, featuring its signature attraction: Hunt for the Richmond Vampire. Inspired by the legend, they put their own spin on it. Pursued by vampire hunters, our undead friend has set up camp in a railroad tunnel in Ashland, Virginia. Charged with the task of assisting the vampire hunters in killing the vampire, we have to do so before dusk — or else.

Somewhat appropriately, the room itself doesn’t resemble an actual crypt; after all, he’s packed up and moved 20 minutes north. Not only has the Red Vein crew done an incredible job of designing the various sets, but the vampire should consider getting into interior decorating during his stay in Ashland, because he’s done a great job of making a railroad tunnel look like home. Bookshelves line the walls, well stocked with an assortment of ancient-looking books, along with a skull. On the adjacent wall is a portrait of the man himself in all of his menacing glory. On the other side of the room are more books, another fairly decrepit-looking skull, and a rather eerie-looking stained glass window featuring some hooded figures with candles. I also got a nice little jump scare when I walk in, courtesy of a railroad worker.

Along with “Hunt for the Richmond Vampire” is a second escape room, “Phobia: An Experiment in Fear,” with a backstory that ties into the rest of their attractions. According to the website, a scientific organization known as Unexplained Virginia, which has investigated haunts such as the Ashland Witch, the Richmond Vampire, and the Order of Red Vein, is conducting an experiment on how the human body experiences fear. In order to conduct this experiment, UV has designed and built a special chamber where, submerged completely in pitch-black darkness, participants will be subjected to a 10-minute/two-person challenge testing just how much fear their nervous system can take. There is no help; if you find the series of tasks too challenging, or you become overwhelmed with fear, you’re promptly removed from the game.

Coming soon is a submarine-themed escape room based the Jules Verne adventure classic, 20,000 Leagues Under the Sea. Judging by the job the Red Vein crew have done on the first two, I wouldn’t be surprised to have to fend off an octopus tentacle or two in order to solve a puzzle.

Ultimately, whether through Phobia, or the Hunt For the Richmond Vampire, Red Vein promises you’ll have a scary good time. The only question is — what happens when the time runs out?

Red Vein Escape Room can be contacted for booking at redveinescape.com.

Jason Sallade is a junior at Randolph-Macon College and a member of the Men’s Swim team. He is a passionate fan of the Washington Nationals and enjoys long-form journalism and sushi. He can be found on Instagram at jason_sallade.

Step Into The 1920s with Into the Woods’ Souvenir

In the living room of a Stuart Ave home in Richmond’s Fan District, the world’s worst opera singer comes to life… and this unique... READ MORE

Step Into The 1920s with Into the Woods’ Souvenir

In the living room of a Stuart Ave home in Richmond’s Fan District, the world’s worst opera singer comes to life… and this unique... READ MORE