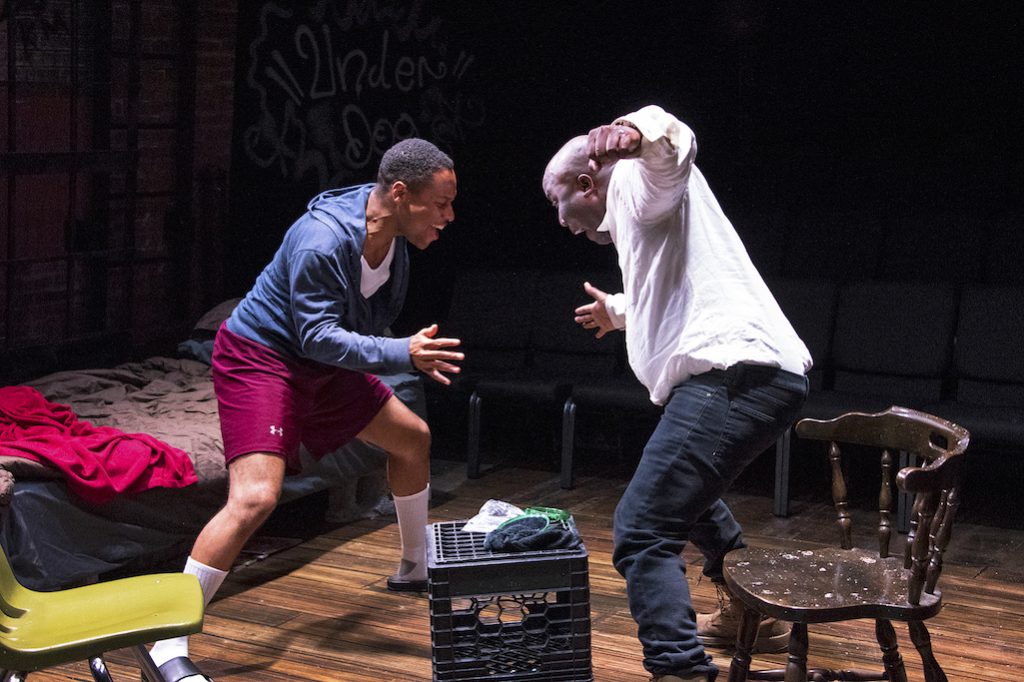 Topdog/Underdog, the final production in TheatreLAB’s series Picking Sides, does an extraordinary job emphasizing the division created by brotherhood. The Pulitzer Prize-winning play by Suzan-Lori Parks is a dark comedy rife with themes of family, history, and resentment.

Starring two incredibly talented actors, Jeremy V. Morris and Jamar Jones, the show dives into the shared one-bedroom apartment of younger brother Booth, who is temporarily hosting his brother Lincoln. And yes, those names were purposefully given to two black brothers. In fact, the themes of the rivalry between the real Lincoln and Booth played out more significantly than expected between the fictitious Lincoln and Booth.

With Lincoln attempting to put his successful career of three-card Monte behind him, he picks up a job as- you guessed it- an Abraham Lincoln impersonator. But that’s not where the similarities end. Not only does he sit in white face impersonating his namesake, he sits in wait for patrons of the arcade to enter, pick their weapon, and fire a blank into Lincoln’s head. Over and over again, Lincoln “dies” for people’s pleasure, never truly seeing the face of his assassin. The phrase “every day, a little death” comes to mind. Booth, on the other hand, is looking to replicate his older brother’s career at the card game by becoming a card shark himself. That alone is one of the greatest sources of tension between the two brothers, in addition to the cramped quarters they share.

With such a complicated set of circumstances bestowed upon their characters, Morris and Jones committed such vibrancy to their roles. The bouncing energy of Jones caused uproarious laughter from the audience, his language and body movements replicating that of a streetwise kid from any city. His equal parts admiration and resentment for his older brother were so palpable, one couldn’t help but think of other well-known sibling pairs, perhaps even their own, and explore the root of sibling rivalry. Morris, on the other hand, had stoic power, at times terrifying, silencing a room one minute then jumping around onstage in comical animation. The juxtaposition between the two was perfectly balanced: one would be silent and thoughtful while the other would be bounding and screaming, and then seamlessly switch back and forth. The acting tango danced by Morris and Jones provided a palatable, awe-inducing somersault of technique and trust, already instilled between the two actors given their past work experience together. Plainly, the relationship between the two actors, brothers onstage, was organic and real.

A play such as this needs a magnificent captain behind the wheel. Making her Richmond directorial debut, director Katrinah Lewis, associate artistic director for TheatreLAB, helped cultivate the onstage chemistry between Morris and Jones by amplifying the strengths of both actors. Lewis found the subtle nuances between two men, brothers, roommates, and competitors. The beats, although somewhat awkwardly placed in the script, were masterfully executed by Lewis’s directorial eye.

Contributing factors, such as set, lights, costume, and sound should always be recognized, especially if they significantly add to the effect of the play itself. David Melton expertly utilized the rather small space of the Basement and created a one-room apartment that could be placed in any large city, complete with graffiti and trash outside of the windows and a bare bulb hanging from the ceiling.

Lighting by Michael Jarett lent to the subtleties created by the actors onstage. A simple color shift notably added to the mood. Sharp blackouts and playful color were noted and appreciated in this production. The costume design by Emily Atkins also added to the world that Lincoln and Booth lived in. Atkins succeeded in not dressing her actors as a stereotype, but rather picking outfits and pieces that tastefully could have been picked off of any person that one may pass by on any given day. Finally, sound design by Kelsey Cordrey filled in the artistic gaps that delightfully added to the urban soundscape, complete with seamless transitions of surround sound music to a passing car, and the final closing song that wraps up the climactic ending. The artistic and technical team must be applauded in their work in this production.

It’s rather tempting to give away the climax of the play, but for the future audiences’ sake, I must speak in rather vague terms. The bulk of the show paints the picture of Lincoln and Booth’s history, relationship, dreams, triumphs, and failures. And while the irony of their names stays aloft in one’s mind the entire time, the actual significance slaps you in the face rather abruptly, yet so deliciously. Lewis did an incredible job cultivating the relationship between the two brothers for the majority of the play, finally conducting the climax into a jaw-dropping, unforgettable ending. Morris and Jones brought comedy, power, tenderness, and knee-slapping comedy in a seemingly bleak set of circumstances.

I know I have said it before, but this is not a production you should walk to, but sprint to. It’s a show that you would regret missing once the season closes. An unforgettable evening of brotherhood, rivalry, heartbreak, and comedy await. It’s also important to add this show has some instances of disturbing content that are probably not suitable for younger audiences. Nonetheless, it is an extraordinary piece of theatre. Topdog/Underdog continues at TheatreLAB’s Basement through June 9. Get your tickets here.

Dancing With Myself: Reflections of a Community No Longer...

For the citizens of Richmond's hidden world of salsa and bachata, opportunities for dancing and being in touch with one another is yet... READ MORE

Dancing With Myself: Reflections of a Community No Longer...

For the citizens of Richmond's hidden world of salsa and bachata, opportunities for dancing and being in touch with one another is yet... READ MORE