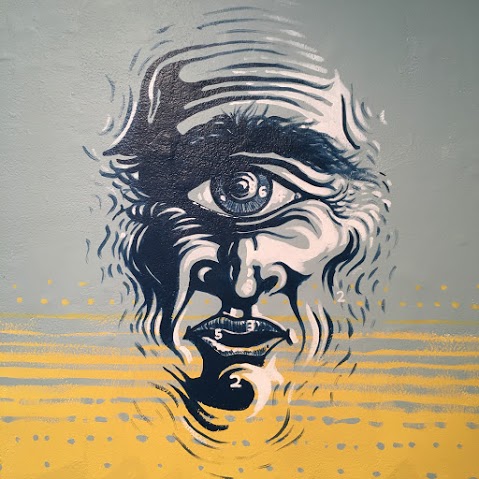 ADA Gallery owner John Pollard’s specific taste led him to putting on events that are daring and fun.

“I think now I can just scare people even more and have fun,” he said. “This is a good example of that. This is not that indicative of what your average art buyer wants, but it’s fun.”

Geo Necro has actually been a year in the making according to the curators and Pollard.

The idea of a Dungeons & Dragons-inspired art show grew naturally, with both curators having a deep affinity for the role-playing franchise. Even the name Geo Necro is derived from an old painting from Browning that he and Smith decided to stick with.

“First was the idea that Ryan and I both make artwork that makes reference to role-playing games and something very specifically to Dungeons & Dragons,” Smith said.

“I was in an exhibit Casey did a few years back,” Browning said. “It was a similar scenario where he created a role-playing game and we played it in the gallery.”

With a clear concept of the artwork being inspired by the fantasy tabletop role-playing game, all that was needed was an original story framed behind it.

“We would write this adventure around the artwork that we got back so we kind of divided up the two parties into the geo and the necro,” said Smith.

That adventure manifested itself at the gallery, including a deck of trading cards and a performance by Smith, essentially a game he would host, for the first group of people who attended.

The game was simplified for anyone new to the realm of role-playing games to invite more activity.

“They throw a dart and they have to lift up a rock-like sculpture or answer some trivia and then they could make an attack on a candidate of their choice,” Smith said. “The rules could be explained in 15-20 seconds. People would choose a feat of strength, a feat of intelligence and a feat of dexterity. To cap it off, they got to choose a presidential candidate.”

The gallery exhibit includes a 40-page zine created by Smith which costs $75.

In addition to Geo Necro, ADA Gallery will be hosting another show in July called “Hologram Politics” by Dutch artist Yaka Boskov, according to Pollard.

“It’s all about big data and the future and computers and that kind of stuff,” he said.