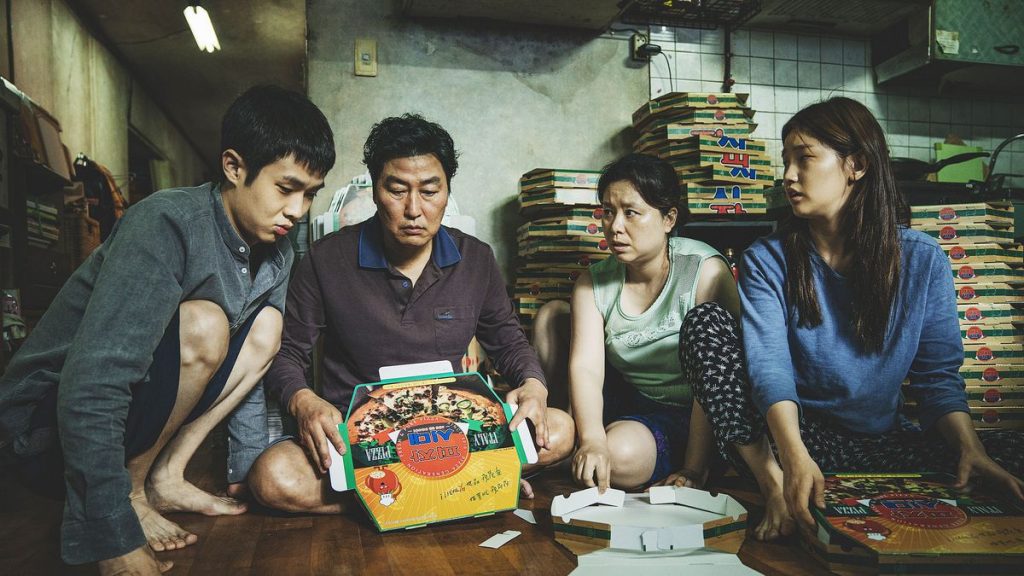 From the opening frames of Bong Joon-ho’s newest film, Parasite, it’s made clear that this is a world centered around necessity, and the way it feeds into the societal roles we play. The focus is on two families, the most important being the Kims, in which all of the members need something that is painfully out of their reach because of their role.

When we first meet the Kim family, they’re shuffling around their below-ground apartment in an epic quest to mooch wifi from a nearby restaurant. When they eventually manage to do so, albeit by climbing on top of a toilet, it feels like a momentous accomplishment. They give toasts and cheers, as if one of them has won the Nobel Prize.

However, the tragic reality of the situation is that the Kims are in bad shape. They must resort to folding pizza boxes for spare change so they can keep the lights on. The Kims despise the elite, looking down on their materialism and hating everything they represent — their lack of appreciation for what they have, and disinterest in those they stepped over to get it. Meahwhile, their own current situation is as far down the societal totem pole as you can get.

Despite their awful luck, the Kims are mostly resigned to their situation; that, is until Ki-woo (Choi Woo-shik), the youngest member of the family, gets a job as a tutor for the Parks — a family possessing a ridiculous amount of wealth and a sickening superiority complex. Necessity is not an issue for them; they have everything they need, and more. The Parks look down on families like the Kims, the father claiming they have a “sewer-like smell” of the lower class, and pinching his nose when he smells anything resembling such an odor.

As a way of generating extra income for his family, Ki-woo recommends an “associate” for the position of an “art tutor” for the youngest Park child. But what the Parks don’t know is that the associate is actually Ki-woo’s sister, Ki-jung (Park So-dam), posing as a student from Chicago named Jessica.

From that point on, the Kim family slowly worm their way into the Park family through lies and deception. Ki-woo and Ki-jung soon recommend other “associates” in the form of their mother and father, Chung-sook (Jang Hye-jin) and Ki-Taek (Song Kang-ho), as a housekeeper and driver.

However, both families come to find out that you reap what you sow; in harrowing, hilarious, and heartbreaking fashion, the Kims realize that there are consequences to their actions.

From the trailers and marketing material, you could easily walk into this film thinking you know where it’s headed, and what it has to say. Make no mistake, though — this is a razor-sharp, biting, and joyfully unpredictable piece of social satire from Bong. It isn’t surface-level shallow commentary easily summed up as “money bad, family good.” It’s deeply textured and, while ruthless in its execution, manages to find compassion for people who may not necessarily deserve it.

Bong doesn’t necessarily excuse the actions of the Kims; nor does he condemn them. In fact, he goes out of his way to make sure viewers know the extent of their deception. Bong revels in pointing out the almost cartoon-like naivety of the rich, and how easy it is for them to be so preoccupied with material wealth that they mistake flesh and blood people as objects for them to use.

But the genius of Parasite truly lies is in its ability to balance social consciousness and all of the genres it occupies. Bong Joon-ho has always refused to abide by the traditional confines of genre, instead focusing on character and story while using genre as a tool to tell a variety of intriguing morality tales.

However, Parasite presents a different challenge for Bong. He plays with the societal ills of the lower class in a story emphasizing the idea that those born into poverty have a much steeper staircase to climb than those without. The Kims slave over assembling pizza boxes in grungy living quarters, living in constant fear that the little they possess will be taken from them in one fell swoop. Conversely, the Parks bask in decadence, never questioning their access to necessities like food, water, and even wifi.

Bong utilizes a rich and wildly diverse tapestry of characters, ranging from abnormally odd and hilarious to disturbingly diabolical. But the most troubling thing about them is that these are people you could easily encounter walking down the street, in class or at work, even sitting next to you in the very theater where you’re watching the film. Bong holds this mirror up to society in a way that avoids condescension, but does not hesitate to implicate us as an audience who may be more similar to the Parks than we choose to believe.

Under a less sure hand, Parasite could’ve been an absolute disaster. However, Bong ably guides you through a story full of entertaining twists and turns, never losing sight of what he wants to say. The entire film crescendoes with a rapturously symphonic conclusion that will leave you slack-jawed and questioning the previous 110 minutes of your life.

Parasite is a richly layered and multi-faceted story about class, the cyclical nature of wealth and the way it poisons all it touches. Even though the Parks are undoubtedly despicable, the real antagonist of the film is capitalism. It eats everyone: the rich and the poor. It is able to eradicate all compassion and turn you into the very thing you hate: a dependent, bitter, restless parasite.

Parasite is a timely piece of social satire that’s deserving of every award, honor, and ounce of praise it gets over the next few months. The Bong Hive will just not stop winning. And I’m having the time of my life.