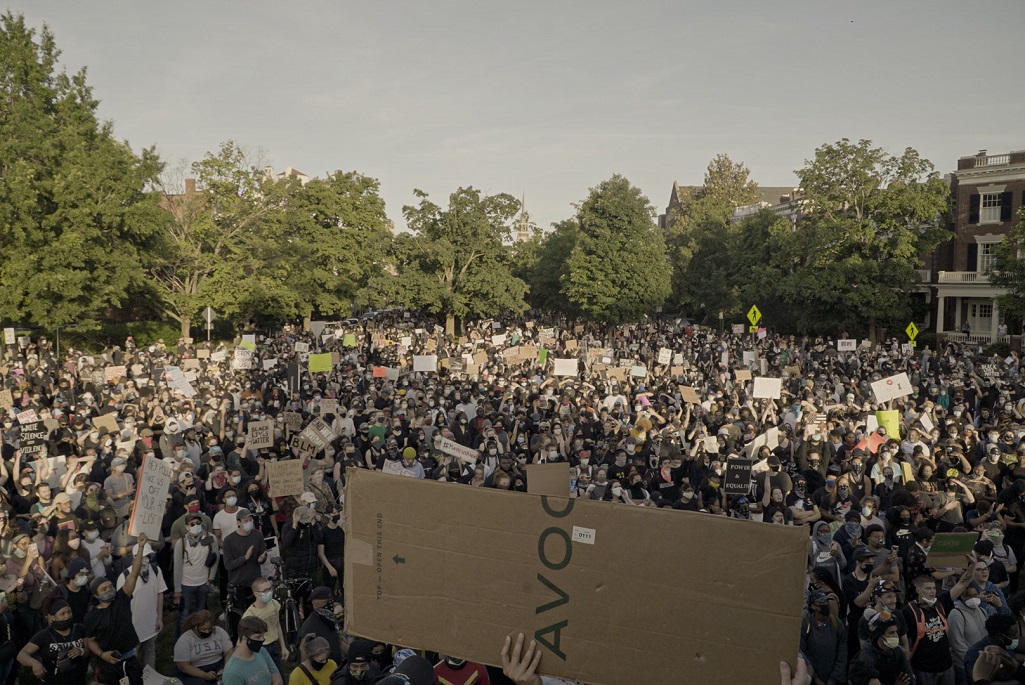 At Black Lives Matter protests around the city, video cameras are the tool of choice for videographers documenting history as it happens.

Over the past few weeks, protests have taken place throughout the City of Richmond, rival those happening anywhere else in the country and often pitting local citizens armed with megaphones and spray paint cans against aggressive police weilding tear gas and pepper spray. Often these gatherings take place in parks adorned with statues of Confederate generals, which have become the target and focus for the movement in Richmond. These monuments serve as symbols of injustice and inequality, the things the movement aims to highlight and change.

For this movement, like every similar movement in the past, there is a need to document history as it happens. In previous eras, this was done through oil paintings, or fuzzy black and white photographs. Today, nearly everyone has an internet-connected video camera in their pockets, and is ready to hit the record button, capturing and sharing history in real time.

Here in Richmond, social media sites have been flooded with videos and photos demonstrating excessive force on the part of the Richmond Police Department. Cell phone videos capture the violence from all angles, and are instantly uploaded to facebook and Instagram for all to see.

Within the mass of videos telling this story, there are a few that stand out, combining reporting with an artistic touch. Domico Phillips, Daniel Bagbey, and Casey Graham are Richmond-based filmmakers whose coverage of the local protests and the Black Lives Matter movement have cut through the noise to make a strong impression on viewers. While Graham, a local musician, is new to filming, Phillips and Bagbey have been making films and music videos in the city for years. All three sat down with RVA Mag to discuss why they decided to capture the protests, the significance of the moment, and their role in it from behind the camera.

“At first I really wanted to stay away from politics,” said Phillips. “But after I saw what was going down, I figured that with my platform, I should capture what’s going on to share it with the world and with our local crowd.”

For Phillips, it’s important to present the truth and offer the perspectives of both sides, so that his viewers can form their own educated opinions. “I never want to fabricate anything,” he said. “I want everybody to see that good things and bad things go on both sides.”

Bagbey, who has a similar approach, felt the protests were important to document. “Obviously what’s happening throughout the country and the world is really significant right now. People are standing up for what they feel is right,” he said. “As a filmmaker I feel compelled to capture something of that magnitude and share my perspective with the world. To me, to not go out there and capture that experience just wouldn’t be right.”

Graham has been an active participant in the protests on a near nightly basis, marching, holding signs, and chanting slogans with the crowd. After a while, he figured that he should bring his camera and capture the moment. “It gave me an opportunity to learn how to film,” he said. “I just brought my camera because I knew it could be useful.”

Since beginning to film, he’s received positive feedback from his fellow protesters. “It’s been a resounding hell yes,” he said. “They want it filmed. They want people to see the truth.” Much of Graham’s focus has been on the monuments and the graffiti that covers them. “When I got there it made sense to film the writing on the wall — literally,” he explained.

Bagbey hopes to be objective with his coverage of the protests — something he believes is not happening often enough in the coverage of the movement. “One thing that really motivated me when I was putting this together was a general lack of non-biased media,” he said. “Most of the content you find in the news or on social media is partial or skewed in some way. There are often very critical moments that are left out of coverage.”

“My goal was to transport the viewer into the situation as a fly on the wall rather than interjecting my own opinion about the situation,” Bagbey said. “I just wanted to show what I saw while I was there, so that other people watching can form their own opinions on what transpired and why it might have happened that way.”

Graham, meanwhile, hasn’t concerned himself with remaining unbiased. Seeing himself as an ally to the Black Lives Matter movement, he is focused on telling the story from the protesters’ point of view. “You can’t really be biased just filming something. It’s [in] the editing that your voice comes through,” he said. “I film everything, but when I go to edit I’m insanely selective. I would say I use 5% of the footage I take.”

Graham feels that his approach to the protests is important, because mainstream media often presents a narrative focusing on loaded concepts like “rioting” and “looting.” Graham doesn’t feel that this narrative is an accurate depiction of what’s been happening on Richmond’s streets. “Everything I’ve seen has been extremely positive,” he said. “I never saw anyone burning anything, or looting.”

For Bagbey, ensuring that ordinary working people who can’t make it out to the protests on a regular basis still know what’s going on is very important. “There are a lot of people that really care about what is happening but don’t have any interest in going out into the street at 2AM,” he said. “Most of the people in this city are not down there. It’s really important for the people that are down there, who have the ability, to put together a film that can bring the events of that night to the rest of the people, and to do it in a way that portrays it like it was.”

Phillips agrees, and sees social media as a great vehicle to get that information to the general public. “Without social media and being able to put these videos out, people would only be able to see one side, and won’t really know the truth,” he said. “The other night, when the police tear-gassed and shot rubber bullets and flash bangs, they tried to fabricate it and say that it was the protesters who started everything first. But I was there first hand recording everything, and you see that the Virginia State Police instigated everything.”

Phillips hopes that his work can ensure that those involved in the incidents are accountable — on both sides. “I want to hold everybody accountable for everything; the protesters and the police,” he said.

Bagbey lets his emotions guide him when he puts the raw footage he’s captured into finished form. “When you’re editing something like this, your heart races,” he said. “You feel that emotion that you felt in the moment, and that’s when you know you’re doing it right, because it’s invoking that emotion that’s real.”

By positioning themselves in the middle of the action in order to capture events as they happen, these videographers put themselves at risk — and they know it. “Definitely,” Phillips agreed. “When you try to cover things you do become a target.”

During the current wave of protests, numerous videos have made clear that police are not differentiating between press, media, and protesters, a reality that puts anyone attempting to document events at risk. “There’s been times that officers pointed weapons at me and told me to move out of the way when I wasn’t doing anything illegal,” Phillips said.

Bagbey has had similar experiences, and says he feels like he’s taking a risk anytime he’s out there. “When the police start advancing it’s really just about not getting pepper sprayed while staying as close to the line of action as possible,” he said. “There was a moment when I was filming… I was staying 5 or 10 feet in front of the police and I was able to give them a signal to say, ‘I’m moving, I’m not gonna bother you,’ and that worked for maybe a minute. Then, next thing I know, I’m on the other side of the line with different police officers, and I’m getting pepper-sprayed in the back of the neck.”

For Graham, who was protesting before he began filming, it feels like an obligation to put himself at risk in order to work toward the positive changes he wants to see in the world. “That’s the whole reason we’re there. To put ourselves at risk for a better cause,” he said. “You [take a] risk going out there in general.”

For Phillips, the protests have been a good experience, both in terms of what he’s seen and in the positive things his own work within the movement has brought him. “Over the past few weeks or a month now, I’ve probably gained four or five thousand new followers,” he said. “Every day I have people reaching out saying things like, ‘I didn’t even want to protest until I saw your videos.’ It feels good to know that people are seeing my videos and it’s motivating them to get out there and check out what’s going on.”

The work Phillips, Bagbey, and Graham are creating not only immortalizes a single moment in time, but helps to tell a bigger story — that of a nation reckoning with its history of racism, injustice, dehumanization, greed, and a legacy of valuing profit over human life. Their videos capture the raw emotion of the moment, showing the many important struggles taking place on our streets today to people all over the world. “You are their window into that event,” said Bagbey. “These videos get seen around the world. And when you are that window into that one night in Richmond for the rest of the world, I think it’s really important to do it right.”