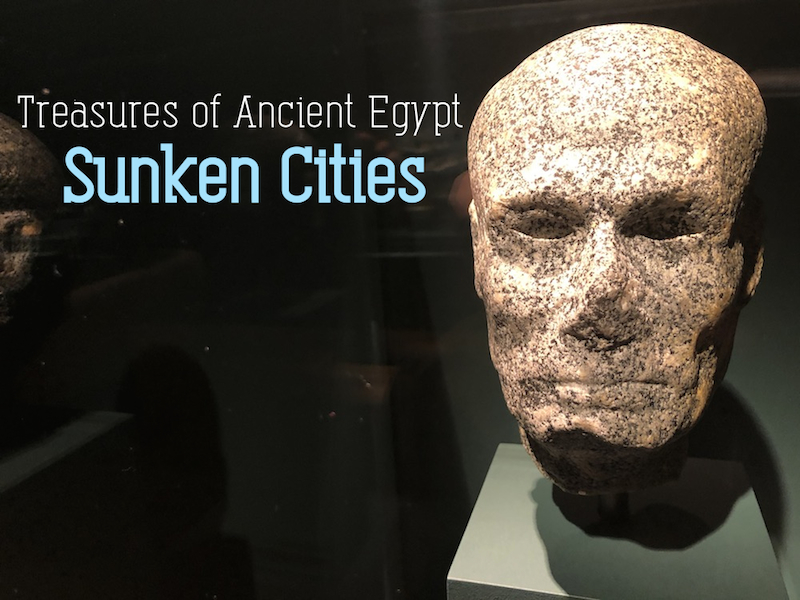 Treasures of Ancient Egypt: Sunken Cities, which is currently on view at the VMFA, provides a close-up look into the bygone history and culture of Ptolemaic Egypt.

Treasures of Ancient Egypt: Sunken Cities at VMFA offers a rare glimpse into the material culture of Ptolemaic Egypt, a golden age of human creativity and arts. It well worth the visit to see these accent artifacts rescued from the water in such pristine condition. VMFA is the only East Coast venue to have this exhibition, and a last stop before the objects return to their permanent home in Egypt.

If you’re a fan of Egyptian history and artifacts, you will find a treasure trove of unique art — including the colossal statue of the fertility god Hapy, which is the largest discovered representation of an Egyptian god.

The exhibition is a once-in-a-lifetime chance to see treasures recovered from two powerful ancient Egyptian cities that sank into the Mediterranean more than a thousand years ago. These civilizations were destroyed by a natural catastrophes in the 8th century AD. Thonis-Heracleion and Canopus were once mighty centers of trade, where Egyptian and Greek cultures merged. In the centuries since their demise, these two cities were known only by scattered mentions in ancient writings. No physical trace existed and there were few mentions in history, with even their true names growing obscured. Maritime archaeologist Franck Goddio and his European Institute for Underwater Archaeology (IEASM) have given new life to these sunken cities.

Visitors get to encounter these findings firsthand, including amazing film footage and photographs that illustrate underwater expeditions with dramatic rediscoveries. Visiting the exhibit, I was immediately stuck with the beauty and preservation of the ancient stone carvings. This period features a unique mix of Greek and Egyptian art and philosophy. These pictures from my visit capture some of the striking art and sculptures. A visit in person truly transports you into a world all its own, where you can discover ancient history like never before.

Treasures of Ancient Egypt: Sunken Cities is on view at the VMFA through January 18, 2021. Capacity is limited, due to social distancing needs, and the VMFA strongly recommends you make reservations in advance.