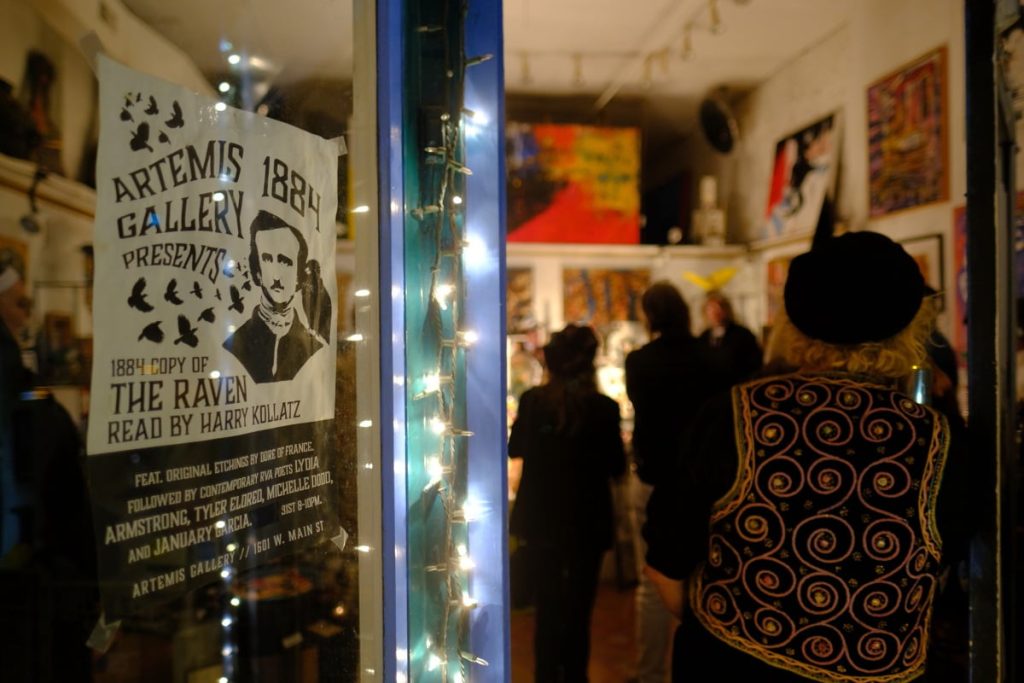 From a dramatic reading of poetry by Poe at Artemis Gallery to an evening of hip hop lyricism at a private location, the Friday of Halloween weekend provided many artistic delights for George Wethington. Here’s his full report.

Once upon a Friday dreary, as November fast was nearing, I found my drunken gaze adhering, to cheeks clapping, clapping, tapping wallets as singles soared. Twas some booties on the floor.
As my gratitude abounded, I asked the gods above dumbfounded, what more new surprises this night would have in store. Twas supposed to be “The Raven,” and nothing more. -Not Edgar Allan Poe

I told myself I was going to have a nice, calm night. My freshest attempt at a quiet evening found me at Artemis Gallery on a Friday night. I was there to hear a reading of The Raven and listen to local poets and writers, including Ryan Kent and Harry Kollatz Jr., shine lights on their psyches. I would observe the shadows and look for recognizable figures.

I found myself two glasses of wine in and being handed another, just for being there. I toasted the Dionysian tramp that wrote The Raven as the words cast shadows and I drank more wine. I saw neurosis exasperated by bad habits and self-indulgence. I saw a man from Richmond.

The poets were all poetic and meant what they said and felt what they meant. Ryan spoke somber and wry verses. I saw a sentient black leather jacket smoke a Lucky Strike and flip a nickel. He was California sober. It landed on heads.

The owner of the gallery handed out poems from Poe for us to read to one another. I got “A Dream Within a Dream.” I read it aloud.

After my reading, I saw a text from an old friend that asked if I could come cover a rap show and costume party at a private location. I saw precious, golden sand passing through my hands and agreed.

I found my friend and hugged him. It had been a long time. He told the man at the front door in the sinister mask that I was press. The bouncer gave me a wrist band that told the event staff I was VIP. It was uncomfortable on my wrist. My friend patted me on the back and told me there was a free drink ticket that came with it. I accepted my newfound status.

When we got inside there was a young woman standing in front of us, dressed only in body paint. She had a jacket draped politely over one shoulder. I thought about prop comedy. There were people selling food and bottom shelf liquor. I ordered the Kentucky Gentlemen and Sprite. Bartender told me it was Montezuma Tequila. I told her it was fine with Sprite, just dump some Roses in it.

I took the concoction past the bar into the event room. The polite painted woman was dancing with similarly clad friends on polished metal poles fastened to temporary staging. They embodied the firmness and agility of youth as the DJ called out the reasons to be excited that night.

A rapper named Intalek was among the obvious thrills of the evening. He was from Virginia Beach. His flow was strong, triumphant, and effortless, like high tide. His lyrics spoke of triumph over adversity. He came across as a gracious, uplifting man. He meant what he said and felt what he meant. He brought the crowd up with him.

Intalek then introduced the sensual interludes as The Cheeks. An appropriately balding man dressed as Bob from Bob’s Burgers enthusiastically sounded his enduring support for the group. The polite, firm, and agile members of The Cheeks brought an easily understandable piece of choreography back to the stage. The DJ listed more reasons to be excited.

I left momentarily with my friend to get some beers I bought for home from my car. The man in the hockey mask said no outside alcohol. We circled the block and loaded our pockets.

I came back inside to the headliner, Traphouse Koda. He was also from Virginia Beach. He had a flow loaded with ambition and gelato filled Backwoods. He was promoting his new single, “Old Silverado.” This young dreamer had an easy swagger and humbly reported the fact that his video for the song had just reached the millions in views on YouTube. Richmond showed him love and respect.

The bouncer approached me during TK’s performance of his single and told me there was no outside food or drink. He asked me where I got the beer from. I told him it appeared in my hand. He said that was an acceptable answer.

He relaxed into a broad-shouldered, jovial man, with dreads and a big smile. We listened to the song together. He said he wanted a Silverado.

I texted my partner as I realized I had crossed a line between drinking and the ability to drive. She asked if I wanted a ride, and what I wanted from Taco Bell. I thanked the gods above for love, and friends, and nights like this, and wondered…Is all that we see or seem, just a dream within a dream?