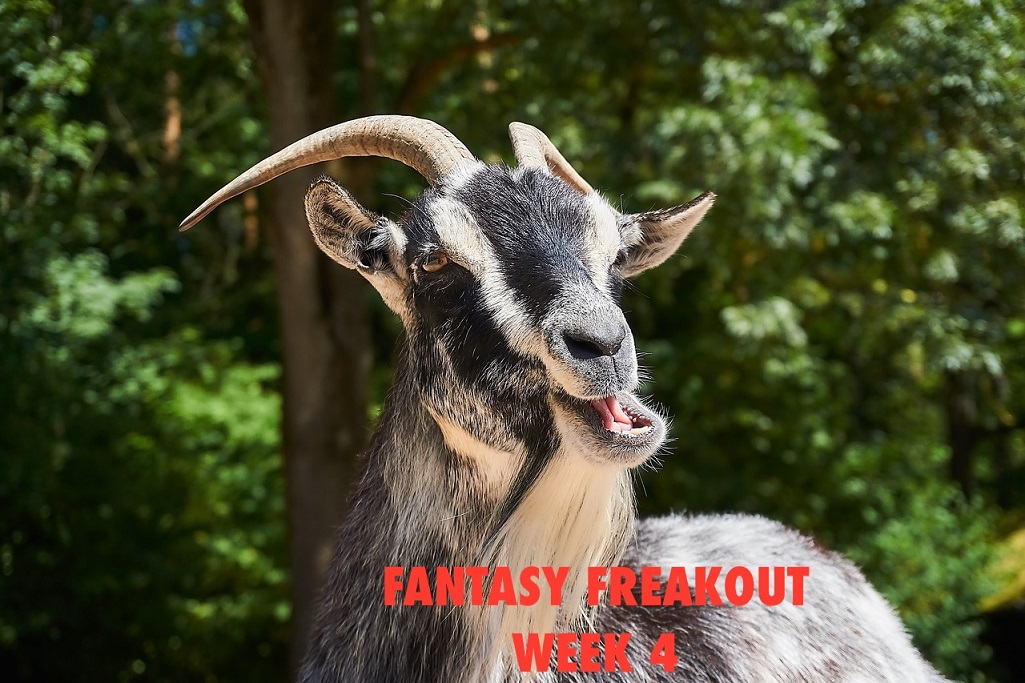 This week on the Fantasy Freakout: with his actual favorite football team rapidly imploding, John Reinhold attempts to find solace in the players racking up the best fantasy football scores. No doubt things will get ugly at some point.

Week 3 has given us a clearer picture of where things currently stand in the NFL. For fantasy purposes, it truly was a week of The Good, The Bad, and The Ugly.

The good: Mike Williams (Chargers) has a good connection with Herbert that’s making him a top wideout this year. There will be quite a few big games coming his way, as it looks like he had finally ascended. Herbert looks really sharp to me. Aiyuk (49ers) finally is getting some looks, someone must have noticed he’s one of the best wide outs on the team. Rodgers (Green Bay) and Adams are back to where they left off last season. I think Adams is one of the most dynamic in the game and looks to lead the league again.

Josh Allen (Buffalo) seems to have developed a connection with Sanders; does this mean that Diggs is getting less looks? I suspect he’s been game-planned on a bunch, and should have big games ahead. Allen sure looked the part of a top QB this week. The Browns offense came alive, with Beckham looking in good form finally. Kareem Hunt is breaking records, and on any other team, probably would be top five. It’s possible he gets top 5 even with Chubb on the team taking carries. Having a running game with those two quality backs is a luxury. Both couldn’t really be stopped (we will get into the Chicago debacle later).

Titans are using Henry in the passing game more, which sure looks great for owners like me that need his production. Tannehill looks decent, but does not seem to have gotten in sync with Julio Jones at all. For the Saints, Kamara has a target share of 21.9%; funny, even that seems low to me for this team. Saints have a good coach and decent defense, but will live and die by Winston in tight games. Giants lost, but hey, Saquon showed up, and that’s a good sign for them. Bengals Defense has been a surprise at times. Najee (Pittsburgh) has come alive but Steelers are struggling getting the ball to receivers — Najee should be the focal point from here out as a fallback for them.

Raiders pulled out a close one, as Peyton Barber surprised the fantasy world with a big day. Raiders look good. That feels so weird to say. Broncos remain undefeated by just killing the Jets. The Rams look like a top Super Bowl contender, with the Stafford and McVay link up looking like one of the biggest offseason wins. Tampa Bay will want a rematch, and may well get it in the playoffs. The Vikings’ Cousins is having a good year; the big surprise was running back Mattison filling in for Cook quite well. Cardinals, to no one’s surprise, beat the Jaguars. Murray looks in total control. Cowboys looked really good overall. I think Pollard (RB) opens up the game for Dak. I cant help but pull for Dak Prescott. He had the same exact ankle surgery as I had (I couldn’t walk for months), and he’s out here playing like this, one year removed. It’s quite amazing from just a personal journey standpoint. I really liked the play-calling that the Cowboys had this game. Dan Quinn is also doing a great job on defense, and had a big win in the draft getting Parsons, who looks like generational talent.

The Bad: Well, all rookie quarterbacks are taking a beating. The Jaguars’ Lawrence had a decent game despite his interceptions, he just has limited talent around him to help out. Give the ball to James Robinson more and good things can happen, coach. Many people had Zach Wilson on their list of rookies that could win right away. We forgot that were still talking about the Jets. Like many rookies, he’s trying to do too much to make up for not having playmakers. Mac Jones in New England probably has had the best year so far, but he’s still a rookie, and not super mobile. The Saints were smart and drew up lots of blitzes to make him uncomfortable, and it worked. I still do suspect he will probably have the best rookie year of them all. Meanwhile, old quarterbacks not named Brady are having issues. Both Matt Ryan and Ben Roethlisberger are not on the same meal plan as Brady, it seems. Arm strength is becoming a real issue, and limiting them and their teams. Maybe it’s the swan song for both these guys, who have been great quarterbacks, no doubt.

The Ugly: First, what’s up with the Washington defense? They are ranked at 31 of 32 defenses in the NFL. They need to figure out the issues, because it’s not the offense’s fault on this one. With so much talent, I feel they can turn it around. But we are now on alert, as the season could slip fast.

Rant time! Chicago…. I think they took the field against the Browns? I mean, there were players out there, but I’m not sure what the plan was. Oh, that’s because there was no plan. Matt Nagy had a piss-poor offensive game plan. How can you do this to the kid? They actually ran the same running play in a row multiple times — no change. They didn’t shift the line, didn’t try more screens or play actions, didn’t try multiple tight end single-back sets to give extra protection (Cowboys’ game plan did this last night). What, two rollouts with a QB that operates best while doing that? I’m convinced now that Trubisky was not the issue. Nagy is trying to fit square blocks into circles. What in the living hell was that shit? Fire Matt Nagy. That was embarrassing, and I want to apologize to anyone who witnessed it.

Lets move on and look at week 4.

Play your best players. If you have to decide between a few people, here are some decent matchups on paper. Check injury status as always.

–John Reinhold, aka Goats Of Doom