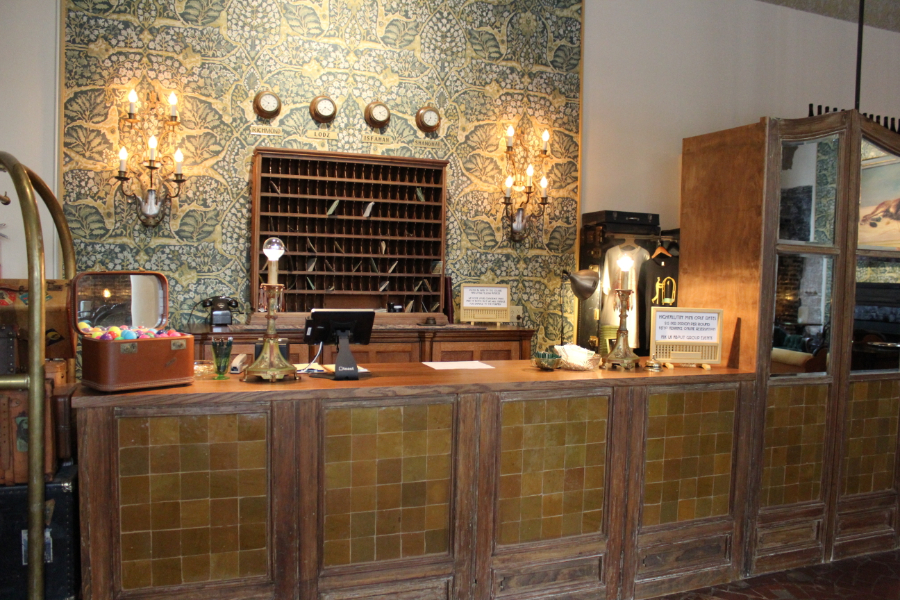 Your Room Is Ready At The Hotel Greene

Whether you’re a mini-golf fan or you love the mysteriously fascinating hotels of bygone eras, the Hotel Greene is sure to delight you when you stop in.

What would happen if Kelsey Grammer’s Frasier Crane moved to Richmond, VA and felt like playing some mini-golf while slumbering in the mind of Wes Anderson?

The Hotel Greene is exactly what would happen – and more. The Hotel Greene is the physical embodiment of the River City. Good food, good drinks, kitschy atmosphere, and otherworldly high society, bringing you the time of your life in the heart of downtown.

And to think that it all started with a painting of a lion.

“We found this in an auction in upstate New York,” said Jim Gottier, who co-owns the Hotel Greene along with Andrea Ball. “It actually came from a place called the Hotel Iroquois. It was in the Hotel Iroquois for a long, long time, and we just thought he was so great. We thought ‘We’re going to have a fireplace, and he will be in charge of the lobby with this sweet, benign presence that he is, and we will build around him.’”

Laughingly, Gottier admitted that they are the kind of people who when they say they are going to do something, they are going to do it (whether they like it or not). Gottier and Ball are also the owners of Greenleaf’s Pool Room, around the corner from Hotel Greene, and were looking for something else to work on when they found the painting. The painting of the lion got things started with Hotel Greene, and the rest of the furniture and decor was built around it.

The lobby itself is nothing short of a Wes Anderson film, which Gottier admitted is a comparison they get a lot – and they are very much okay with it. The entire building exudes this creepy, romantic aesthetic of the early 20th century time period its intended to evoke, from the vintage seating to the drinks at the bar. Visitors feel like they have fallen into another time.

Inspiration for the place came from Ball and Gottier’s aesthetic, as well as the otherworldly romance of hotel stays. There is always a story to tell, whether it’s creepy, romantic, or thrilling — even a story as simple as getting lost on your way to your room or the ice bucket. This is the kind of spooky cool that the Hotel Greene’s owners wanted to embody.

“I love the connections to a Wes Anderson kind of environment, but really this comes from a [1924] book called Hotel Savoy by Joseph Roth,” said Gottier. “He stayed in these hotels and wrote newspaper articles as these people from between the [World] Wars were displaced and coming and going. We are attracted to a kind of grand, Central European hotel, which was grand and now maybe kind of chipped. The people who live in [these] hotels are running to, or from, something.”

That kind of romanticism was what Gottier and Ball were looking for, and ultimately what inspired the narrative laid out by the miniature golf course. You start at hole one and try to find your way to Room 208. While you’re at it, you experience all of the different things going on in the hotel.

Despite all of the grand elegance that wraps itself around you when you enter the hotel, Gottier wants you to just remember one thing — it’s not that deep. It is just highfalutin’ mini-golf, after all.

“It’s definitely a kind of site-specific art installation, but we’re playing mini-golf,” said Gottier. “We sell beer koozies. We sell boozy slushies. We try to always dial back the pretension, and we try to trade off both in a really fun way.”

As I stood in awe gazing around the hotel, my jaw dragging on the floor, the first question that came to mind was: how did the decor come about? It turns out that it has a little backstory to it — dating from the days when Gottier was a pool hustler with the nickname “Carpet Jimmy.”

“I always hustled pool at night, but by day, I bought antique carpets,” said Gottier. “I bought for a gallery in Los Angeles, and because of that, I got to know lots of auction houses all around the country. When it came time to source this place, I had these auction houses that I could call and check on what they’re selling. We sourced them all from auctions across the country.” In particular, Gottier wants to give “a huge shout out to Caravatti’s. There are a dozen pieces from Caravattis.”

With such attention to detail thrown into this project, Gottier is proud to say that customers who come in get what they’re walking into right away. Very few people come in just to play mini-golf as if they were at the local Putt-Putt. Both adults and children have understood the difference and embraced it wholeheartedly.

The details wouldn’t have come together without some Richmond heavyweights being involved. Leslie Herman designed all of the illustrations that you see around the building, even on the drink glasses. The food and drinks are designed by Citizen’s chef and owner, Greg Johnson. Both managed to bring a sort of old-time, romantic whimsy to the refreshments, in the way only they could.

“We wanted to have lots of shares, so you can eat each other’s food,” said Gottier. “The first week we had an omelet station out there, and some nights Greg will come out and make bananas foster with a chef’s hat on.”

Depending on who you ask, the Hotel John Marshall may in fact be haunted. Since the Hotel Greene occupies the former restaurant of the old Hotel John Marshall, I had to ask if the staff had seen anything so far. Gottier admits that there’s been nothing yet, and figures if ghosts do show up, they’re probably just enjoying a quiet game of golf themselves.

Regardless of whether the Hotel Greene is something you’d expect to find downtown, the fact that it is something unique that the city doesn’t have anywhere else makes it better, and makes it a worthwhile destination no matter what part of the city you’re from.

“The downtown has been kind of neglected,” said Gottier. “[But] I think [Hotel Greene] expands the map of cool spots downtown. [We’re] reinforcing the idea that downtown is really a bright and vibrant place.”

Put on your best pair of trousers, stop by the bar to order a Manhattan, and grab your putter. It’s tee time, folks.

The Hotel Greene is now open Tuesday through Sunday, and is located at 508 E Franklin St.

All Photos by Ash Griffith