Hi-Fructose Magazine co-founder ATTABOY on a decade of publishing and their VA Beach exhibit, 'Turn The Page' - RVA Mag 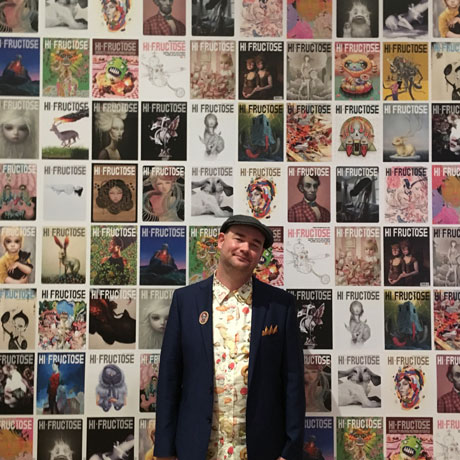 RVA MAG recently had the chance to catch up with Attaboy, co-founder of California-based art magazine Hi-Fructose, at the opening of Virginia MOCA‘s exhibit “Turn The Page” in Virginia Beach which celebrates 10 years of publishing the magazine.

RVA MAG recently had the chance to catch up with Attaboy, co-founder of California-based art magazine Hi-Fructose, at the opening of Virginia MOCA‘s exhibit “Turn The Page” in Virginia Beach which celebrates 10 years of publishing the magazine.

As a fan, it was fun to be surrounded by the artwork that made the publication a favorite of art lovers worldwide. As a publisher with a decade under my belt, it was a meeting of kindred spirits. Attaboy was nice enough to answer a few questions for us in between tacos and proofing their next issue.

Who is Attaboy? Alter ego? Where did the name come from?
It’s an old family name. I come from a long line of truck driving magicians.

It probably wasn’t a good idea to start a magazine, but now that it’s been 10 years of Hi-Fructose — why a show on the East Coast to celebrate that milestone?
My wife Annie and I started Hi-Fructose on a crazy impulse after a short break-up in 2005, right when people were saying that print was dead. Yet, here we are! We had curated several art shows over the years that were great, but this was something completely different. Scary for sure, but good. Annie and I both have roots in the east coast. I grew up in the rural ‘burbs of Long Island and Florida and she has family in Alabama. The art we show can be seen in certain Los Angeles, San Francisco and New York mostly. But we’d already done that. I guess we wanted to go where we were needed.and the Virginia MOCA was doing exhibitions with a few of the artists we’ve heralded over the years, so it made sense, and they were crazy enough to undertake such an endeavor. And show this sort of art in a fresh new way.

Did Virginia MOCA reach out to you about the idea first?
We sent them a brief email at 2am in the morning or something… And they responded! And thus began 3 1/2 years of back and forth.

After covering so many talented artists over the years, was it daunting to figure out who you wanted in the show?
It’s a ridiculous endeavor, actually. And the Turn the Page exhibition, is really kind of its own thing. Like a movie based on a book. Heather and Alison spear-headed it, otherwise we’d never figure out final selections. The variables they dealt with, and are still dealing with as the exhibition tours, is akin to an independent movie, or a circus. Logistics, funding, crating, loan documents, the educational component. This thing is not your standard art show. Most of the art pieces are the pride and joy of someone’s collection, you know, which is special, and the folks at the MOCA know that.

Besides that, what was the biggest challenge in making it happen?
Annie and I are used to debating with each other quickly, fast and furious, each day. And we are total control freaks for nearly all HF related decisions, except for Caro, our blog editor. Initially, It was hard for us to trust an outside institution, but it certainly worked out, for the betterment of the exhibition.

Is Mark Ryden’s work (pictured above) a danger to the public?
No. It’s never a danger to have art which people can debate and enjoy. It’s a better world to have art in it, even art that you aren’t keen on.

What did you think of the controversy surrounding the opening of the show?
It was like a bizarre dream, stirred up by a few opportunists. Yet, it caused a great deal of discussion and dialog and a few very interesting questions! Every cab and Uber driver who brought us to and from the MOCA couldn’t help but weigh in with their opinions. And personally, i think it brought us and the MOCA folks together. How cool is that?

In speaking with Virginia MOCA staff, the show was a big deal for the area. Do you feel a focus on the arts, murals and shows on this level can make a difference to a city?
Hell yes. There’s a Churchill quote I should spout right now which says it perfectly. But instead, I’ll just say that a society is more than the people and the buildings which contain them. Art can save people’s lives, can bring out the best in people, give strength to the disenfranchised, helps people make sense of their world and find where they fit into it. Creativity is a human need that seeks an outlet and is fueled by possibility and inspiration. Rarely has any one regretted actually making something; be it a cake, a painting , or a drawing. And not everyone can be a sports fan.

How do you feel the show turned out overall?
Annie and I were speechless. We can be pretty critical people, but our jaws dropped.
Alison, Heather and Debi and their team did such a fine job. Very few things in our world turns out better than we imagine. This was one of them.

After a decade of publishing — are you still excited about the Hi-Fructose project? Where does it go from here?
Who knows! We’re constantly evolving. We curate each issue for ourselves and our readers. And the Turn the Page exhibition will go to Ohio, then Sacramento, California. We get so many great emails and letters from people just discovering us, people of all kinds and ages, we kind of can’t stop now.

Oh one more question, when do you plan to come to Richmond?
Heh, we live in Richmond, CA. From what we hear, our sister city is percolating some great stuff. It’s only a matter of time.