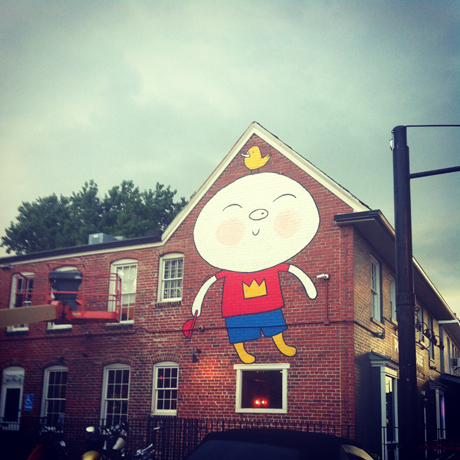 No matter how well you know your neighborhood or your city, even if you can retrace the streets by heart, even if you’ve navigated the alleys a thousand times, on the one thousand first time you can still see it like you never have before.

No matter how well you know your neighborhood or your city, even if you can retrace the streets by heart, even if you’ve navigated the alleys a thousand times, on the one thousand first time you can still see it like you never have before.

That’s something that street art can often accomplish. It can stop you in places of transition- sidewalks, subways, bridges, trains- and hold you there. If it can show you something new about a place, or a different way to interact with it, it can transform your relationship to it.

Over the years Richmond has been one those places street art has steadily transformed the atmosphere which continues to grow in favor of artwork in public places.

The number of murals has grown rapidly thanks to events like the the RVA Street Art Festival and the Richmond Mural Project. Both have left positive marks on the city which in turn created the supportive climate more public works to spread across Richmond.

Now our home isa place where art is treated as a public resource. The street art approach is a great way to showcase talent, involve the community, and beautify public places, but it also allows an independent style of engaging art that has its own powerful effects.

A mural doesn’t inherently have to be any more communicative because it’s on a wall, but the decision to put something in public view implies intentionality about who is going to be looking at it and how it’s going to be seen. Public art is conscious of viewers because it purposely puts itself in the middle of the audience, so the pieces often have a social relevance.

Because they purposely interact with the world around them, they are given to commenting on that world. Outside of a formal art space, they gain an ability to reach us in an intimate way.

They seem to live where we live and this can often make it feel like they’re speaking directly to us.

RVA Muralist Hamilton Glass argues that, “anything that does not have stake in its community or its surroundings will ultimately have less value.” Not that randomness isn’t valuable, he points out, because that can also be an important conversation to have, but if it doesn’t engage people in a conversation it isn’t going to last long. Once a piece stops being meaningful to the people who experience it, it will quickly fade away. 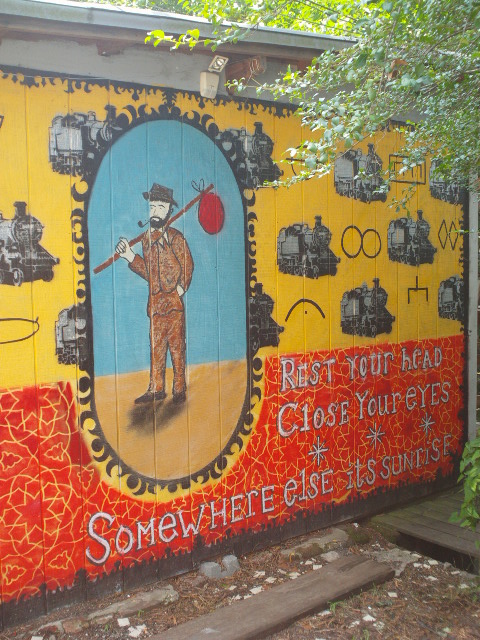 For example, the wanderer in Oregon Hill (seen above) in a procession of trains suggests something dreamlike. He carries a feeling of contentment with his hand in his pocket and a pipe in his mouth. The landscape, separated from him by a gold frame, looks like it reflects his internal vision or his identity as a traveler and that seems to be the source of his contentment. The poem at the bottom-right, “Rest your head/ Close your eyes/ Somewhere else it’s sunrise,” connects him and the viewer to the outside world, framing it at once as attainable and meaningful.

One of the defining qualities of street art is where it is. It’s affecting not just because it’s outside of a building, but because it shows up where it’s not supposed to be. It interrupts our normal interaction with a place or an object. Whereas conventional pieces use their physicality mostly to represent an idea, street art celebrates its physical existence and interaction with our physical world. That makes it a transformative process.

By being out of place, it breaks down some of the ways we define and separate space and by bridging spatial barriers it often makes us aware of being in the same continuous space with each other.

Taylor White’s third mural in Richmond sprawls over five walls outside of The Clothes Rack thrift store on Cary Street (seen above). The signatures of her style are readily apparent: the tangled characters in tense postures hold the energy of motion in their bodies; the hot colors of their skin are also energetic and intensify the action.

As the mural moves to the right we see body parts knitting into each other- legs looped around legs, fingers knotted on an arm, palms sliding together. The contact shows the characters holding on to each other with some urgency and their motive energy results in them chasing each other across several frames. There’s a feeling of something being unleashed that breaks out of the confines of the wall.

The idea of going to the street is that it’s a place anyone can access. The process is an effort to find room for yourself and your voice outside of any restrictions that would contain them. Whatever needs expression will find expression somewhere.

“You can’t contain an artist,” explains Jackson Ward muralist Sir James Thornhill (seen below), “we’re going to scribble somewhere. You give us a brick, we’ll paint the brick.”

Graffiti is a good example of his point. It grows on the walls of abandoned buildings and boarded up windows scattered through Jackson Ward. Sir James sees it as telling of his community. “They’re looking for their identity. You see a lot of tagging, and their name is on it, it’s like- someone’s about to recognize me.”

Street art becomes a place where the unheard can push through and take over. They claim space by occupying it, and it belongs a little bit more to them by representing their work. That can steer in an aggressive direction to ideas of property and ownership so it leads the art toward abandoned and forgotten places that fill up with their voices. 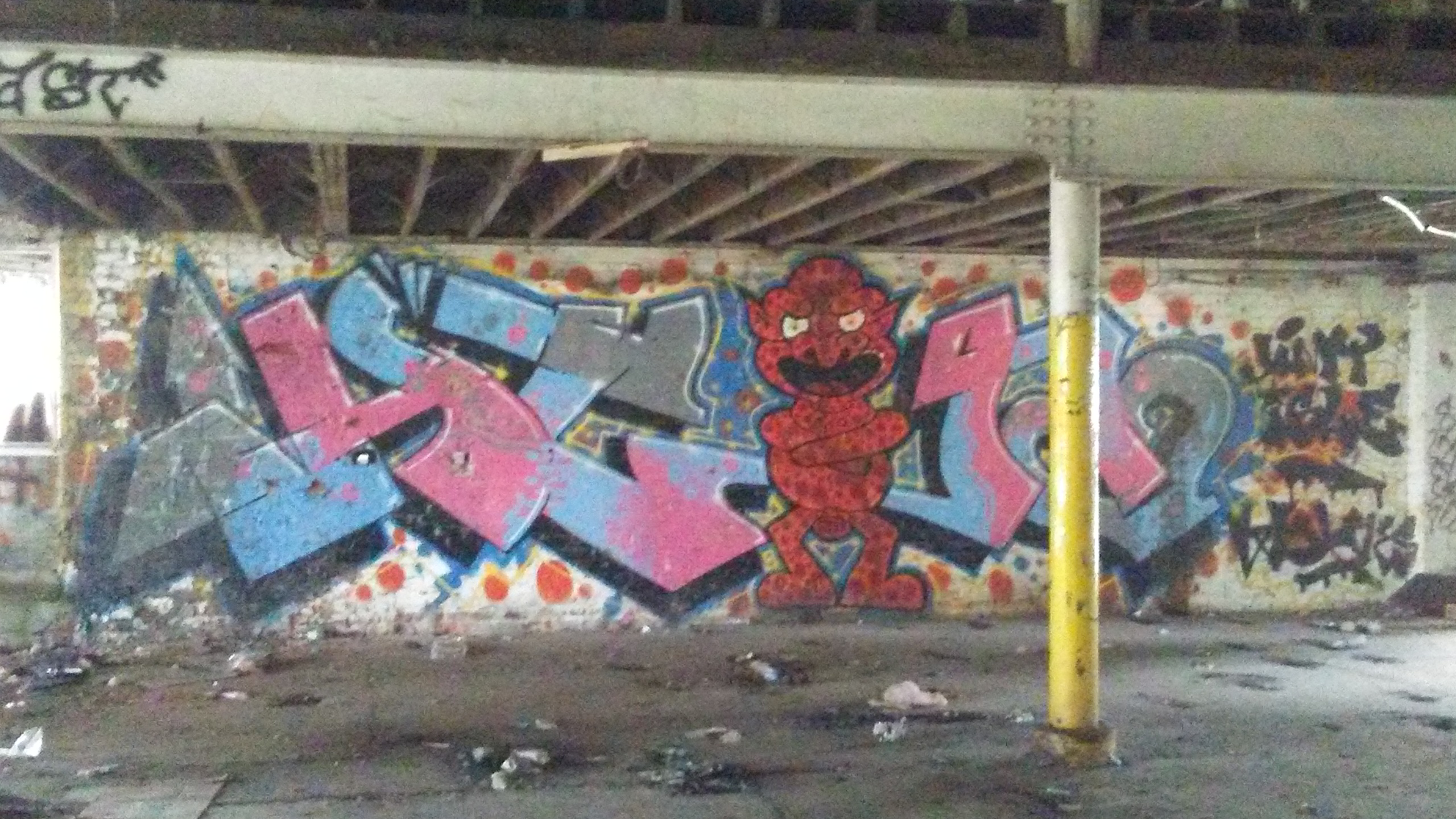 In the tag seen above, the image dominates the wall of an abandoned warehouse on the south end of the Mayo Bridge. Its presence is itself a defiance. The bigger it is the more defiant it seems and the more twisted the letters the more outrageous they are. The red gremlin in the middle carries an air of wickedness that revels in disobedience. His arms are tied in the way of a straightjacket implying that an institution would lock him up. The picture flaunts an opposition to that kind of rule.

Every year Richmond’s streets a have become more populated with artwork. Four years ago, when the RVA Street Art Festival had its first gathering and the G40 brought a number of murals to the Canal Walk, public art was just beginning to be the buzz in the city.

Now Richmond is known for its art scene and innovative installations. Street art has the advantage of interacting with an environment in a way the private works do not. And the more the trend evolves and spreads, the more the streets belong to the people who inhabit them.