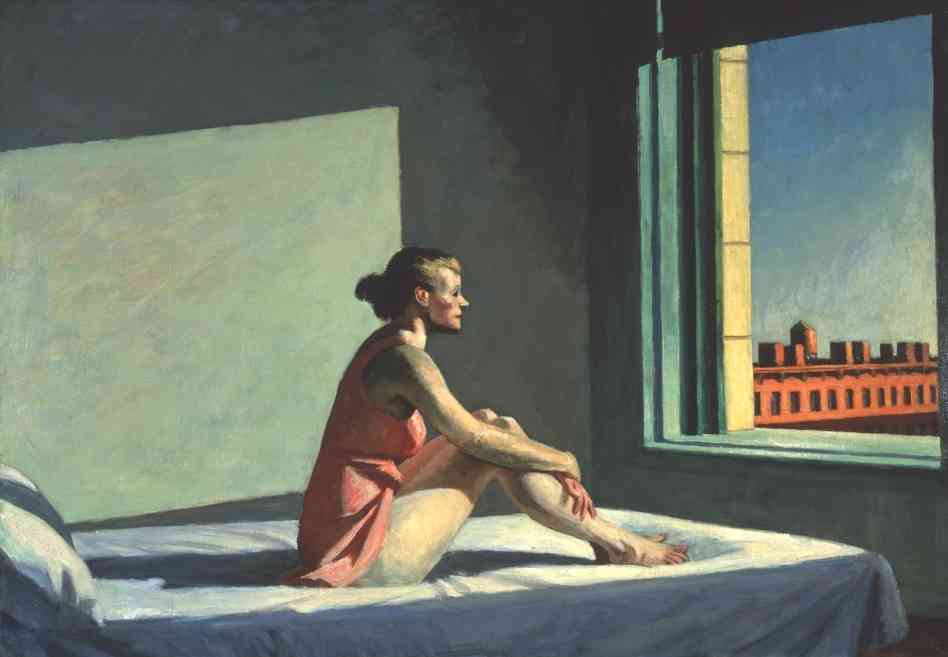 Edward Hopper captured the alienation of 20th century America in his paintings of hotels, currently on display in an in-depth retrospective at the Virginia Museum of Fine Arts.

The exciting new show Edward Hopper and the American Hotel opened October 26th at the VMFA, its only East Coast venue. Despite long being an established part of the American artistic canon, and having portrayed hotels and motels for much of his life, strangely this is the first major retrospective of Edward Hopper’s work focusing on this subject.

Although many know Hopper chiefly by his painting “Nighthawks,” his quintessential image of loneliness and alienation, depicting a diner late at night, much of his best work was created with an eye on hotels and motels across the nation. This new exhibition gives us an illuminating view of his career with a focus on his favorite subject matter, and broadens our understanding of a painter now considered one of the great American artists.

We are first introduced to Hopper through his covers for the magazines Hotel Management and Tavern Topics, along with a self portrait of the young artist. The exhibition then proceeds roughly chronologically through his career. At the entrance is a huge photographic image of the artist — the constant invisible presence in his mature body of work, where he never willingly shows his face. It is fitting that he looms over us as we enter the exhibit.

We catch sight of the man himself again in a photo by Berenice Abbott, where he sits scowling beside his etching press. According to his wife Josephine “Jo” Nivison Hopper, Abbott “was taking up the whole morning, and using the studio of a very distinguished person,” as she put it, “as slowly as possible.”

Along with other photos by Abbott, known for her photographs of New York architecture and important artists and writers of her time, the thoughtful inclusion of a variety of other artists leads one to speculate how Hopper has influenced American art. The photographers Cindy Sherman and Gregory Crewdson, to name a few notable examples, call attention to the way the setting of the hotel room functions as a stage. In some sense, every painter “stages” their paintings, but unlike Hopper, most do not call attention to that fact.

A vital recurring motif on these stages is the window. In Hopper’s strange and familiar world, the window is just as often a barrier as it is a threshold, as in the empty black eyes of the solitary woman of “Morning Sun.” In the final image we are left with before exiting the exhibition, “Hotel by a Railroad,” a man looks out the window upon a wall — and another window, which, covered by a curtain, likewise functions as a wall. Meanwhile a woman in a nightdress sits reading in a chair nearby. Although they are staged only a few feet apart from one another, the two figures appear deeply solitary. Despite the voyeurism evident in much of his work, as much remains hidden as is revealed.

Some of what is on display here also reminds us of what is absent from Hopper’s oeuvre. The inclusion of Reginald Marsh’s “Belmont House,” for example, helps to highlight the overwhelming whiteness of Hopper’s world. It is worth remembering that most of these hotel spaces were segregated at the time. “Belmont House” is also interesting in its portrayal of social life, in stark contrast with Hopper’s lonely figures. These elements drive home the fact that, although these paintings seem to function as empty stages, they are far from neutral ground, and are certainly not universal.

We are also invited to contemplate the constant presence of Hopper’s wife Jo during much of his travels, showing us that he was not precisely the solitary figure wandering the American landscape that his paintings might have us believe. Part of the exhibition focuses on their travels through Mexico, and three of Nivison’s diaries are on display as well. During their trips together in the 1940’s and 50’s, she was an avid chronicler of their experiences. This was a time when the hospitality business was booming, with over 59% of those who traveled overnight by car staying motels.

In any case, one need not even be familiar with the image of the hotel room at all to identify its “American-ness.” One thing that characterizes our nation is our great (apparently) empty spaces, as in these hotel rooms — or perhaps on long stretches of highway, along which we can experience, as one critic put it in his description of Hopper’s painting “Rooms for Tourists,” the “strange clarity of something seen for an instant by a passing driver.”

Overall, in Edward Hopper and the American Motel, we are taken on a fascinating journey through Hopper’s career and the culture of American hotels and motels during his lifetime. The hotel is identified as a site where Hopper created some of his finest work, as well as a place where people from all over America came together without seeing one another.