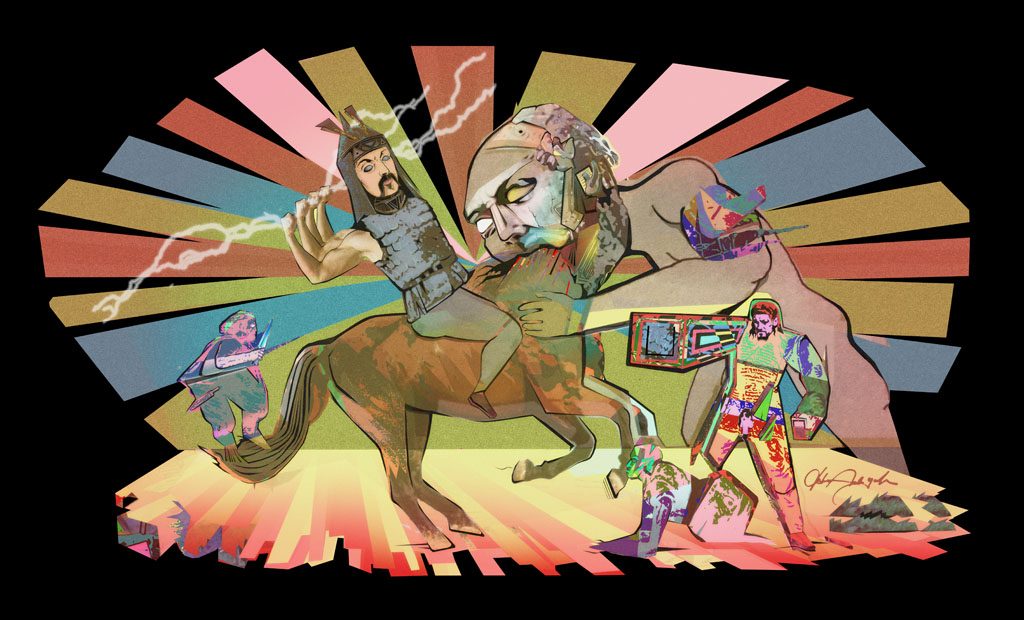 “Hannibal was the best. No comparison.”

Zane shook his head at this. He was the kind of pale that if you looked long enough you might be able to make out the road map of the veins in his face. The dark circles under his eyes made him look as if he was permanently fresh from an altercation. His hair was neat, faded perfectly and slicked back. He dressed well, always in black. He did what he could to protect himself from the sun. It wasn’t like what everyone believed, they were just extremely sensitive to natural light. They didn’t have to only go out at night.

“Do people still talk about Carthage? Do you ever hear about the rich expanse of the Carthage Empire? No.”

The café was dimly lit, most of the light came through the windows. Darwin and Zane sat in a booth close to the bar. They were both having coffee. Darwin was eating a bowl of strawberries. Darwin looked similar to Zane. Black hair also faded neatly to the top of his head but in a crew cut manner. He wore a silver ring on every finger.

“That doesn’t matter. Think about the battles; Trebia. Trasimene. Cannae. He was the essence of cunning. No apprehension.”

“Genghis.” Zane shook his head in a manner to indicate the obviousness of his answer.

“How you are I almost expected you to pick Ögedei.”

“I expected you to pick someone like Frank Drake.”

“Because I knew him?”

“No, it would just be like you to pick a glorified pirate when we are talking about Generals.”

Zane rolled his eyes, shielded by his sunglasses.

“Why Kahn?” Darwin bit into one of his strawberries. The smallest bit of red juice stuck to the corner of his mouth.

“Think about it. He took over most all of Eurasia. How many dynasties did he take on? 4? 5?” Zane held up the back of his outstretched hand revealing the fanged panther tattoo that reached out to his fingers. “Straight up, had one of the world’s largest continents under his control. Also a 20 year reign is way more impressive than say…” Zane waved his hand around in the air. “a 9 year reign, like Alexander.”

“I just think Kahn is heralded because he was flashy. Like Napoleon. He’s easier to sell in the history books. Choosing Kahn is like saying your favorite band is The Beatles. It’s too easy. Hannibal was methodical, he was pure.”

“I can’t disagree, but history is written by the victors. Kahn wrote his own fame.”

“But what of someone like Bonaparte? He failed and is still heralded as ‘a great’.”

“He was famous for compensating for his height and Waterloo.”

“Do you remember when we saw him?”

“We did?” Darwin cocked his head.

“Why would have it been there?”

“Some treaty or another.”

“I think you’re thinking of his brother.”

“Possibly. It’s been some time.”

Darwin pushed his empty strawberry bowl to the side. Zane sat with his head cradled into his hand as he rested his elbow on the table. He looked outside at the vaguely busy shopping district. He saw a girl walk by. Her hair was blonde, almost white, her sunglasses large, designer brand of some sort, probably something Italian. She had a purse adorned with gold clasps, a white shirt and a grey skirt that was just short enough. She walked leisurely in shoes that matched the inside of a grapefruit color of her purse. Her lips matched this too, he could see it from here. She must have money, maybe she was an art or fashion student. He wondered where she was going. He felt as he normally felt at such a sight, something less carnal and more politely animalistic. What would she do tonight? Who would she see? He imagined her seeing him. He imagined her with a glass of wine, laughing. The words he would say. The logistics of his movements, both verbal and physical. Would he smile at her with that aged smirk? Would he comment on how smart or beautiful she was or would he play it coy? Would he give her his jacket if she got cold? Would he walk her to his apartment promising relaxation and more wine? He imagined her bound by his favorite accessories in his white bed. He imagined her small cries of ecstasy as he brushed his hand against her exposed thigh. Cries like the mews of a kitten, faint and adoring. He imagined what she would look like with her skin ripped off of her body.

“What are you doing tonight?” He asked this as if he had already asked it once.

“Oh, uh, not sure. Some friends from Reykjavík are in town.”

“Yeah, you hate to see it… No one just disappears anymore.” Zane clenched his fists at this statement and moved his head towards his shoulder and cracked his neck.

“When was the last time you ate?” Darwin could sense Zane’s anxiety.

“Maybe one week give or take a few days.”

“You’ll be fine. The festivals start soon. Berlin is good for that.” Darwin smiled, stretching his handsome, feminine, pale face.

“True.” Zane nodded again. His arms crossed against his chest. “I’ll be fine.” Zane conceded to the fact his behavior was telling.

“You know what I’ve always wondered?”

“Yes?” Zane looked up from sipping his cup of coffee.

“I wonder if any General has ever been like us.”

“Other than the Wallachian?”

“Yeah, used a campaign or something as an excuse for themselves.”

“I feel like one of them would still be around and would have spouted off some divine rhetoric as to why they were so old. At least that’s what I would do. People were easier to convince in the old days.”

“Or maybe they’d go into hiding to avoid attention after a certain point.”

“Some said that about Hitler.”

“I honestly believe it, but I feel like we would have encountered him sometime between the 40’s and now. It’s not like we operate in a huge circle. He would be pretty high profile. Possibly too hated to show himself. If he is alive he is probably weathered away in some cellar.”

“Usually tens of thousands of people die by the means of some General, some Emperor, some President, only for that leader to be murdered, overthrown or generally swept from power eventually. In a way…” He trailed off in thought and then resumed. “If any of the more tyrannical leaders of years of yore had been like us, those deaths would have actually meant something, at least some of them. Maybe I’m biased”

“I can see what you mean.” Zane took a sip of his coffee.

“What do you and the Icelander’s have planned?”

“Stroll around. Try to find something to eat.”

“I’m really wishing you luck then.”

“They mentioned something about trying to make their way to Vietnam at some point.”

Illustration by Austin York, see more work by him at @johnaustinyork

A.E. Stallings is an author and musician residing in Richmond, VA. He majored in English and Creative Writing at Hampden-Sydney College and spends a great deal of his time traveling and performing as the singer of the band Break Away. His available selected works can be found here mourningsongs.bigcartel.com

Top posts by A. E. Stallings