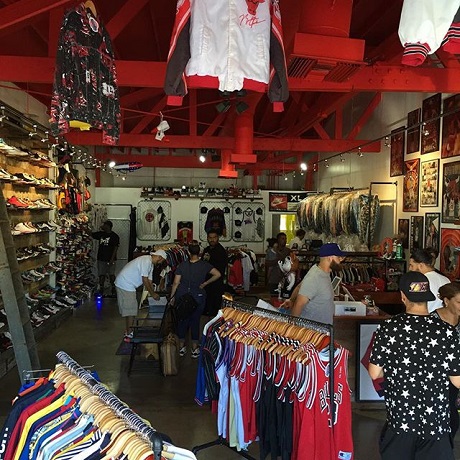 Los Angeles sneaker freaks rejoice, RVA’s Round Two is now kicking it on the West Coast too

Richmond’s favorite men’s fashion buy, sell and trade store Round Two, now located at 202 West Broad St. has decided they want to kick it out on the West Coast.

The store, which carries men’s shoes, shirts and other high-end fashion items at affordable prices expanded beyond the confines of its humble Richmond beginnings with a new storefront on Melrose Avenue in Hollywood this past spring.

“[Co-owners] Sean {Wothersoon} and Chris {Russow} moved to L.A. around June, the time we moved from 104 West Broad to 202 West Broad,” said Carlos Santos, a store manager, and one of the store’s first employees. “The market may be a bit different, some stuff goes for a bit more, some for a bit less…but otherwise, it’s pretty much the same.”

Since it first opened in the summer of 2013, the store has done much to revamp and ride the still-growing wave of demand for obscure brand name sneakers. Not just the newest shoes, but classics dating back to the eighties like Jordans, Adidas and Reebok as well.

In RVA Mag’s first interview with the boys when they first opened, Wotherspoon mentioned a famous celebrity who visited the store and loved it.

“David Arquette came in here, dropped a ton of money, and said he’s never seen this in LA or anywhere else. He tweeted we were the best store in Richmond, and he made us realize that, “Wow, if he’s never seen a store like this then we might be the only one out there.”

Well now, Arquette and other LA shoe freaks can finally get their fix now that Round Two is on the West Coast.

Round Two sets itself apart by capitalizing off of the underground market instigated between friends and sneaker-heads, in which people trade and sell shoes that can’t be bought in traditional shoe stores like Foot Locker.

Shoes that haven’t been produced in 15 years, or special editions that only had a limited number ever produced. Even sneakers that artists have redesigned by drawing or painting onto the shoe itself.

More importantly, the way the business is designed, it allows customers to get these items at considerably lower prices than they can find elsewhere or online.

Third co-owner Luke Fracher said the three didn’t mean for it turn into a crazy sneaker operation, they just wanted a place for men to buy, sell and trade their gear and get cool shoes.

“At the time we opened, the only people who would buy shoes were your homies, Rumors, and Plato’s Closet…and besides your homies, no store was paying good money for sneakers,” Fracher said. So when we started paying people good money for their shit, they realized they could bring it here. It’s convenient, and we’re not gonna bullshit you. You don’t have to deal with PayPal fees. We just give cash and let you walk out the door.”

Another cool upgrade, dating back to the time of the move to Los Angeles over the summer, is the aforementioned move from one building to another in Richmond. The new space at 202 West Broad St. was christened “The Gallery” for its assortment of Nike and Michael Jordan memorabilia.

Every childhood sports fan who grew up in the ’80s and ’90s dreams of a store like the Gallery.

According to Santos, the space was originally meant to be an art gallery, but after moving in, the partners agreed to better utilize the space by making room for a sales floor as well.

“I wasn’t here for the building of the gallery,” Santos said. “So I came back from four or five months away…I walked in and literally couldn’t believe what I was seeing. It was crazy. I had seen the stuff collected over time, but I had never seen it together in one place, put together so precisely…”

Ultimately, what keeps Round Two going is a genuine love for the products they sell. Each employee knows not only the make and model of every obscure sneaker that came out in the nineties, but they also know the market for them and are knowledgeable enough to give customers a fair price.

“We have great relationships with [customers],” Santos said. “That’s big for us …we try to have our knowledge, but also try to be nice about it. You can go to NY or DC to these boutiques, and everybody is just a dickhead, and that’s not a fun shopping experience.”

Santos said, “Sometimes you don’t feel like buying anything today, or maybe you have a stupid question about this…but at the end of the day, that’s just how it is, not everybody knows everything. We want to make sure a person is treated like a person and not necessarily a customer.”

Get a look at behind the scenes at Round Two with a video the owners have made below:

Ep. 1: The Store from Round Two The Show on Vimeo.