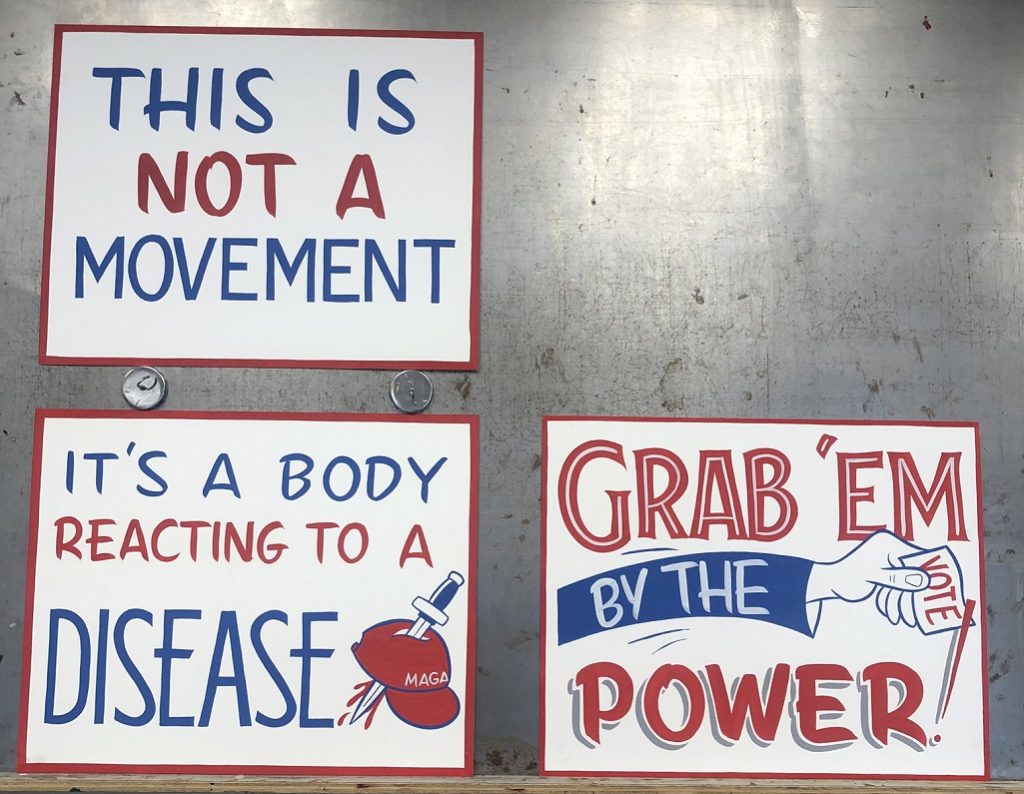 With their recent art exhibition, The Best Opposition is a Good Composition, Sure Hand Signs brought a powerful collection of protest-inspired artwork to Scott’s Addition. The artwork was designed by sign painters, whose goal was to examine the intersection between artistic creativity and impassioned activism.

The exhibition was held at Studio Two Three’s workspace in Scott’s Addition on Saturday, February 23. The show was curated by Ross Trimmer, owner of Richmond’s Sure Hand Signs. According to Trimmer, the purpose of the project was to give painters a forum to show their artistic interpretations of protest signs.

While Trimmer had been thinking about doing a sign-focused exhibition for a while, he got the idea to concentrate on protest signs after seeing a “specifically ridiculous” tweet from President Donald Trump. Trump’s tweet was aimed people protesting against the confirmation of Supreme Court Justice Brett Kavanaugh. In the tweet, the president attempted to delegitimize the protesters by declaring that they were on the payroll of well-known liberal philanthropist George Soros. What got Trimmer was when Trump said that he could tell the protesters were paid, because the signs the protesters used looked professionally made.

“This gave me the idea to have a show of protest-specific signs, painted by people who make a living making signs,” Trimmer said.

For his exhibit, Trimmer received submissions from artists all over the U.S. and Europe.

Artist Julie Auclair-Eikmeier, owner and creative director of Signs+Designs by Graphic Jules, had a piece featured in the exhibit. Eikmeier’s sign reads “Keep your politics off my body.” The phrase is backdropped by a graphic image of the White House and features a color scheme based on the Women’s March theme. The slogan she used has a history going back decades, but her choice to use it was based on a protest pin that had been worn by actress Sarah Silverman’s mother.

“I’d seen [Silverman] post the pin a few times and each time the message really resonated with me” Eikmeier said. “It seems odd that so many years later it was still so fitting for this day and age. I wanted to breathe new life into the slogan and make it applicable to the current state of affairs in Washington.”

Nick Trbovich attended the show after hearing about it from a friend. Trbovich said he appreciated the direct and “to-the-point” style of the pieces.

“There is a lot of substance,” Trbovich said. “It speaks to me more than a lot of abstract art… this has more of an impact on me.”

Trimmer said that protest signs are a means of transmitting a clear message to others.

“The fun thing with doing a show directly related to protest signs is, there is no need to guess at what the artist is hinting at,” Trimmer said. “With signs, the message is the medium, it’s right out front.”

Eikmeier said is was important to her to participate in the project, as she feels artists have a social responsibility to use their talent as a means of fostering change and spotlighting injustice.

“This time in our world is a pretty fickle one,” said Eikmeier. “I feel like as an artist you have a responsibility to stand up and use your skill [and] craft to be a voice for those who aren’t so sure how to, or [are] not able to.”

Trimmer sees the current contentious political climate as a direct influence on artists; protests signs are another way to express that frustration.

The Best Opposition Is A Good Composition will be featured at Chicago’s Electro Pepper Gallery in June. Currently, Trimmer is working to digitally compile the submissions he has received. He plans on making them available for free download, so that people can use them at protests and rallies.

“This show is very relevant currently,” Trimmer said. “Everyone is extremely frustrated, and there’s something really freeing about putting the anger or frustration in your head to paper.”