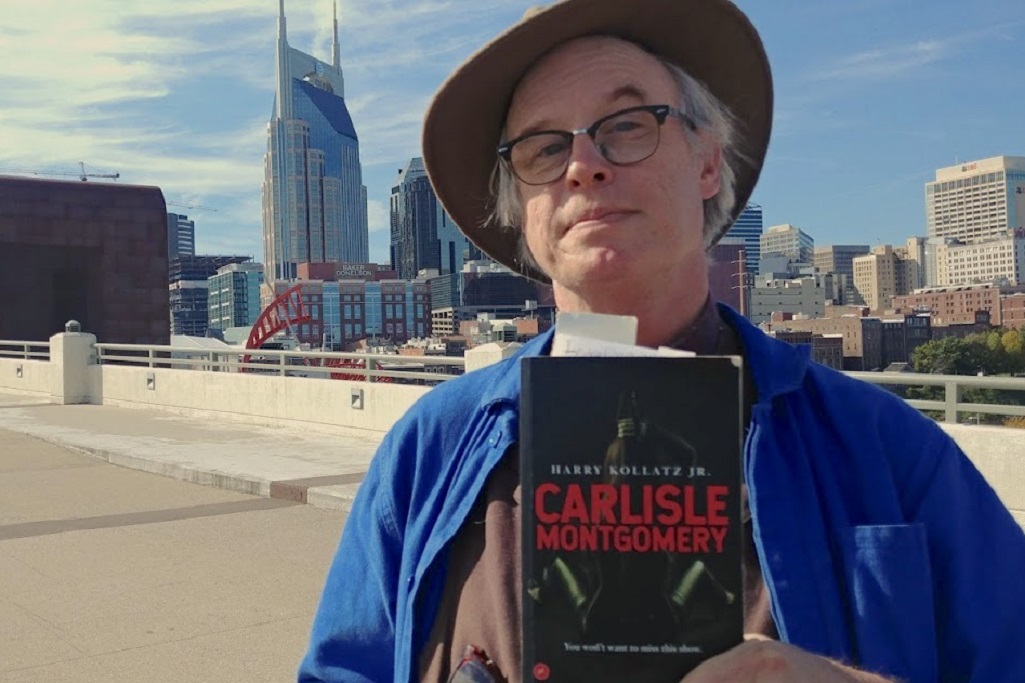 Style Weekly doesn’t do their annual “You Are Very Richmond If…” issue anymore, and in a way, that’s probably a good thing, because the Richmond that departed series simultaneously commemorated and satirized is gone, gone, gone. After decades of largely remaining the same in both its virtues and its flaws, the tidal wave of gentrification that has swept across this city in the past decade has left a place that’d be unrecognizable to the hipster habitues of the river city’s grotty nooks and crannies circa 1995.

Harry Kollatz Jr’s Carlisle Montgomery is a 700-plus page love letter to the bygone Richmond that was, and whether you want to see what you were born too late to catch, remember a time that’s been irrevocably lost, or just read a sprawling, gloriously messy yarn about the starving artists, madcap musicians, and dead-end kids that thrived in a city temporarily written off by the powers that be… well, it’s absolutely worth diving into.

If any Richmond journalist fits into that classic “Very-Richmond” mold, it’s Harry Kollatz Jr, the longtime Richmond Magazine contributor known for his fedora, his Lee’s Chicken weather reports, and his many anecdotes about the odder incidents in Richmond history. Those anecdotes have been appearing in Richmond Magazine since the mid-90s, and have been collected into at least two books published by Arcadia Press, True Richmond Stories and Richmond In Ragtime. Carlisle Montgomery is Kollatz’s first full-length fictional effort, but he makes up for lost time by telling us a sprawling bildungsroman of a tale that spans something like 25 years in the life of the title character.

Carlisle Montgomery is a six-and-a-half-foot-tall redheaded woman with adactylia, a condition that results in her having no left ring finger. Regardless of her status as an overgrown nine-fingered freak (a description she’d embrace), Carlisle is a wild, confident young lady with a talent for guitar, a penchant for unusual relationships with all manner of men and women, and a predilection for ending up at the center of attention. The novel, which jumps around all over the place where timelines are concerned, takes up the story of Carlisle’s life right around the beginning of her adolescence.

At 14, she’s already over six feet tall, and stumbles into several ill-fated romantic entanglements that are complicated by the fact that no one looks at a woman as tall as she is and expects her to be underage. She finds herself becoming romantically involved with both halves of a married couple she meets on the Appalachian Trail, whose shock when they learn her age is not enough to derail the relationship. That throuple arrangement continues for years as Carlisle moves from awkward adolescent to late-teenager on the cusp of adulthood.

Throughout this time, her relationship with her music is just as important as her romantic involvements and her evolving relationship with her parents and extended family — another complex plot thread in its own right. Early in the novel, we get a glimpse of the Live Wires, Carlisle’s band, at their peak, only to double back and watch the band come together and evolve into mature form over the course of years. We get tons of details about their music, which is apparently a hybrid bluegrass style heavily influenced by outlaw country and punk rock; anchored by Carlisle and her fiddle-playing best friend, Laurel, the group seems like what would happen if the two coolest girls in your high school had managed to start a non-sucky version of the Dave Matthews Band. I figure if the Live Wires were a real band I could actually listen to, they’d sound something like the Pogues if they were from Appalachia. Maybe.

With detailed descriptions of the band’s songs, lyrics, albums, and gigs, Kollatz paints a vibrant picture of Carlisle as a musician and the Live Wires as a band. His in-depth coverage of Carlisle’s relationships with both women and men, which number quite a few by the time we’ve reached the novel’s end (at which point Carlisle is in her late 30s), are just as vivid and alive. The many Richmond and Virginia landmarks that make up the setting for the book’s most entertaining anecdotes are recreated perfectly, and it’s at moments like these — with the Live Wires sneaking onto the minaret-capped roof of a half-abandoned rug factory in Scott’s Addition to take band photos, or Carlisle and her married partners hitting the Ululating Mummies New Years Eve party at The Flood Zone in Shockoe Bottom — that the Richmond that once was and has been irreversibly wiped out by gentrification shows through most clearly.

For the recent arrivals, that rug factory is now the Hof, and The Flood Zone is now that condo complex on the corner of 18th and E. Cary. These examples only go to show that, while some of the changes Kollatz documents in Carlisle Montgomery are actually for the better, all of them are changes that move Richmond away from its roots as a working class city of cookie factories and cheap starter apartments, toward a future in which the city becomes a playground for the rich with an admission price that gets higher and more out of reach for ordinary people with each passing year.

Carlisle Montgomery not only tells the tale of a unique and uncategorizable talent who was nourished by the rich creative soil of a city and grew into stardom, it also tells of a time when Richmond was that kind of city. And it captures the heart of this city in that era through a detail-oriented approach that makes clear how well Kollatz knows this city’s many bygone eras — even if he does get the timeline wrong at times. For example, Cary Street Cafe is thriving in this book years before it opened in real life, and by the book’s 2011 end, Scott’s Addition is full of breweries, despite the fact that in real life, the law legalizing all those breweries was still a year away from being passed.

Indeed, if I have any criticism of Carlisle Montgomery (the novel), it is just how wild n’ wooly it gets at points. Timelines get confusing, huge chunks of correspondence and fictional magazine articles show up in ways that are hard to follow, and sometimes the individual sentences bite off more than they can chew and run on, or lose coherence, in ways that can leave a bemused reader rereading the same paragraph two or three times before they can really pull it all together. And still, there are times when it doesn’t quite all add up, and you just have to stop asking questions and go with it. Kollatz is an entertaining tale-teller, and he makes it easy to do so, but I still have to admit (even if saying so is tantamount to telling my grandmother how to suck eggs) that I wish I could have gotten an editing pass on this beast. There are a few passages that beg for a tidying up.

All that having been said, anyone familiar with Harry Kollatz Jr’s previous work will have a blast diving deep into this rambling magnum opus. While I wouldn’t say Carlisle Montgomery is exactly like Sissy Hankshaw, all the fans of OG Richmond hipster novelist Tom Robbins are sure to get a kick out of this one. And of course, if you want to remember this city in a time that wasn’t necessarily better or worse, but certainly was different, Carlisle Montgomery is here to act as your conduit.

Carlisle Montgomery is currently available in trade paperback from Australian publisher Primer Books, and can be ordered via Kollatz’s website.