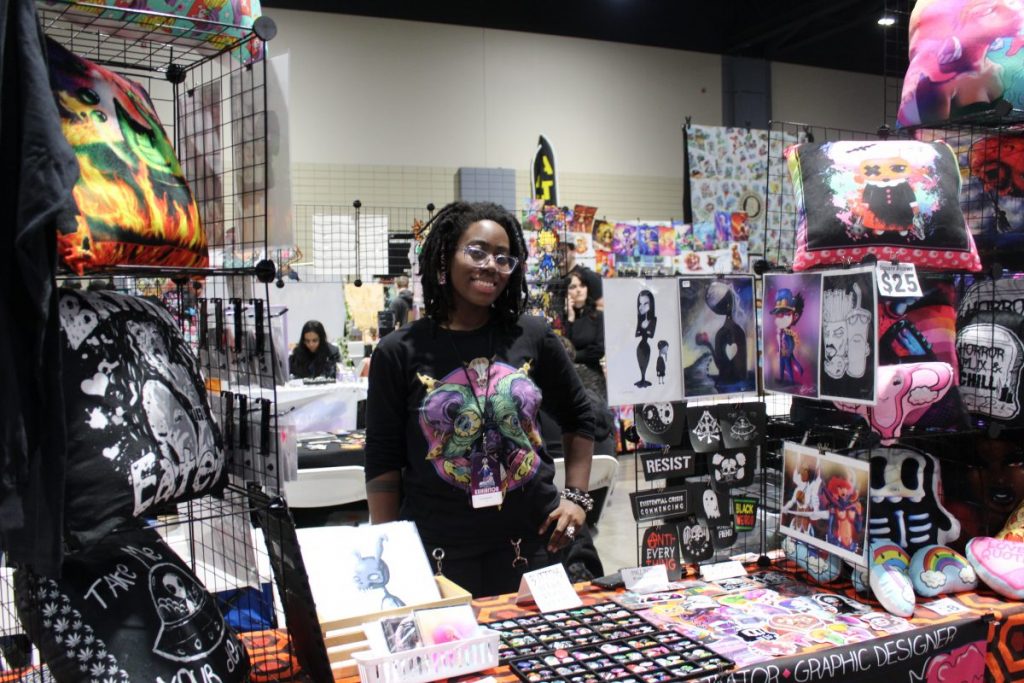 The celebrity signings, merch booths, and high-profile panels are a big attraction, but the true heart of GalaxyCon Richmond is always found in Artist’s Alley.

It’s easy to get distracted by the excitement of meeting your favorite celebrities. Especially actors who portrayed characters in series of our youth, whether in live action projects or voice actors that we could pick out immediately in a crowded room. From Harry Potter and Smallville to newer animes such as My Hero Academia, conventions are the perfect time to get swept up in our comfort-food media of choice.

Often we forget about the creators of all backgrounds who bring the best out of any convention. Comic artists and writers illustrate the worlds and characters we fall in love with from the ground up, and create stories that we get lost in so we can forget about the mundane and painful in our lives. Without the Stan Lees and Jack Kirbys of the world, the world is indeed pure greyscale.

“I love seeing the energy of everyone being excited about creativity and comics and art,” said Artist Emi Lenox. “It almost encourages me to work more when I get home. It’s like a little boost.”

Lenox is best known for her autobiographical approach to comics, combined with her cute aesthetic. However only time will tell how her approach will change in the future.

Fan creators hold the seams of all fandoms together like industrial duct tape and military grade thread. Not only is it always fascinating to see everyone’s approach to their favorite comics and films, it is truthfully the best part of any con, especially GalaxyCon.

Few fan creators are as detailed and painstakingly close to film quality as the work of Brazen Monkey by John Marks. Marks is a skilled prop builder and artist who has been creating for thirty years. At this year’s GalaxyCon Marks could be seen with his to scale replicas of Battle Cat from He Man: Masters of the Universe, and switching back and forth between cosplay as Negan from The Walking Dead or Iron Man’s Tony Stark, depending on the day you caught him.

Last year at the 2019 GalaxyCon, he brought what was easily one of the most popular exhibits in the exhibition hall: a to-scale Toothless the Dragon from How to Train Your Dragon. With the help of his girlfriend, he travels to various conventions in the country not only to display his pieces of the moment, but to let convention attendees have the chance to pose with them.

“I have an art degree but was a personal trainer for awhile so I was just doing small things,” said Marks. “I started making things for Halloween every year, then one year I finally decided to build a Hulk. I sculpted a seven foot tall, foam filled Hulk, and the next year I tried to do a convention. I decided to try and see if anyone likes these things.”

Marks charges a nominal fee to pose with — and even climb on top of — his creations and have your picture taken. Eventually he made enough from touring the props around that he was able to quit his day job and focus on his creations. Other creations he has attempted include The Iron Giant, and How To Train Your Dragon‘s Light Fury. While Toothless was a huge hit (I actually tried to interview Marks at GalaxyCon last year but had to give up because of the popularity of his booth), The Iron Giant holds a special place for him.

“The Iron Giant I think was really something that I was pleased I could do,” said Marks. “It was something completely away from what I was used to doing. I was doing a lot of organic builds, and this was going to be more of a challenge to build the neck, so I’m really pleased with that one. It’s kind of hard to say. Something you just hit a perfect wheelhouse.”

Artist Alley is always a big draw at conventions, especially for fans and collectors craving something unique to have in their collection, or sticker number 67 to slap on their water bottle as they walk about the con floor. Of all of the many conventions on the east coast, GalaxyCon Richmond has a solid argument for having the best Artist Alley tables, even in just its second year.

From traditional paint and canvas artists, to creators interested in making unique pieces featuring your favorite characters, to young comic artists and writers hoping that their comic will be the next one you fall in love with, Artist Alley contains some of the most important pieces in the convention puzzle. Artist Alley is one of the most important days of the year for both fans and the artists themselves.

“Last year I thought I was able to predict what I needed to make,” said Artist Jordan Kincaid. “I thought I would get more commissions this year, but this year I’ve actually been selling more prints, so that’s worked out in my favor.”

Artist Mackenzie Lemoine was also at the inaugral GalaxyCon Richmond in 2019. She does a few cons a year, but having last year under her belt, she felt more prepared for convention goers.

“I definitely feel more organized,” said Lemoine. “I feel a larger belt upon my belt in terms of preparation. I know more artists this time, so that’s a plus in terms of being able to bounce back and forth, and help each other out, but you also get more cross promotion. I feel like this year I’ve gotten more exposure just from being here and knowing more of the artists.”

MoonBoy creator Tammy Ung-Brown was also a member of the “convention number two” team. GalaxyCon is her second convention, and she was also excited to bring her knowledge from her first experience at Savannah Comic Con.

“It’s gone a lot better,” said Ung-Brown. “My first one I was kind of getting a feel for it, because I had gone to cons before, to take notes on what other people were doing as a guest. When I had my own table it was still kind of rough because I was trying to sell a lot of original stuff [as opposed to fanart]. Now, coming to GalaxyCon having some fanart has certainly helped. Most people are looking for something they’re familiar with.”

Artist Mariah Bryant chose GalaxyCon Richmond to get her feet wet as an artist, and while it was a little bit disappointing in regard to sales, it was still a positive experience from the career front.

“I was hoping I would sell my books more,” said Bryant. “But people aren’t familiar with them, so I’m constantly introducing people to them, but that’s why I’m here. I’m here to get people interested, spread the word a little bit, and also to network. Every time I’ve been to a convention as an attendee, it’s always to get business cards, make connections, see who’s in the area. And I’ve done that well, so that’s been beyond my expectations.”

Out of many artists that I met, artist Mana Stafford, who uses the tag Chibicabra, was probably the most seasoned in regard to conventions. They have been tabling since about 2010, and attending as a fan since about 2004.

“I really like meeting new people,” said Stafford. “I feel like every time I go to a con I make a new friend, and I like having those connections for traveling and stuff like that. I think as an artist, I really like doing art trades, which is a thing where artists will trade goods. Like, if someone likes a keychain or a print I have, and I like a shirt, we’ll trade. It’s just a really great community thing where the artists will get together, and we’ll get sushi or dinner afterwards. It’s really nice.”

Conventions are always fun. Being surrounded by colorful, fun paraphernalia, always having an interesting panel to go to, and getting the chance to be near your heroes? Of course, those things all rule. But those in the know know that Artist Alley and the Exhibition Hall are truly the heart of any convention. To be in a place where you can have one on one, honest conversations with your favorite comic and prop creators, and then turn the corner and be immediately welcomed by a sense of community from artists who may have just met you but want you to feel embraced in inclusion?

That certainly sounds like something we need more of in the world — especially right about now.

All photos by Ash Griffith