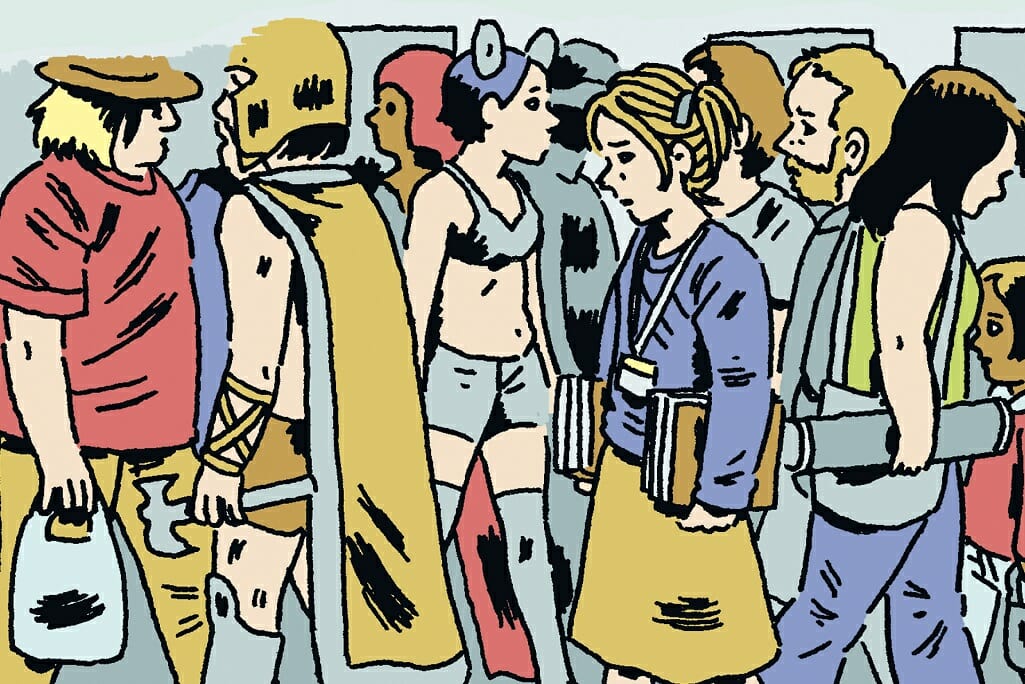 Happiest of Tuesdays, comic fans! Welcome to the pre-Thanksgiving edition of your favorite bi-weekly comics column in the River City. Consider us the soothing marshmallow fluff to the sweet potato pie that is your weekend.

In the spirit of Friendsgiving and being thankful, this week we are thankful to have friend of the column, and Richmond comic, Patrick Buhse here to talk to us about what gets him excited in the world of comics. After meeting up recently at Comic Arts Richmond, we got to talking about comics that make us nostalgic and feel warm and fuzzy, like the best turkey hash.

Before we head down memory lane, though, I have a couple pieces of comic news to keep us aware of the up-and-coming in the comic world. Grab your favorite sweatpants from that college you never went to, your second helping of stuffing, and let’s dive on in.

Comic fans love nothing more than a good crossover. Thanks to the popularity of The Avengers label of the Marvel Franchise, one easy cash grab for publishers and film studios has been to sling all of your favorites into the same room, like a less awkward high school reunion. Anyone who wanted to see DC and Marvel, the two big-bads of the comic world, mingling their characters has generally been out of luck.

That is until now – kind of. This week, Guardians of the Galaxy director James Gunn made an intriguing comment on his Instagram, when asked about the possibility of the ultimate mashup.

“In the past I would have said no way, but today I think anything is possible,” Gunn said during a question and answer session on the stories feed of his Instagram.

The business end of things puts a heavy damper on this dream, though. Currently the rights to the majority of Marvel’s properties are owned by Disney (like pretty much every other intellectual property these days), and DC’s rights are owned by Warner Bros — ironically, two colliding industry heads in their own right. However, in all fairness, I don’t think any of us thought that we would ever see Spider-Man in an Avengers film, due to that character’s film rights being strong held by Sony for the longest time. So perhaps Gunn is correct, and anything really is possible after all.

While known about town today for comedy at your favorite hot spots, in past years, Patrick Buhse was the comics guy at our other go-to favorite, Velocity Comics on Broad Street. Today, he breaks us down his top five comics from when that’s all he had his hands on. Over to you, Patrick!

The Frank Book by Jim Woodring

“My brain doesn’t really ever slow down. It’s hard for me to pay attention to much, because my instinct is to constantly be running or talking or bothering with whatever little thing is closest to me. It makes reading, at most times, an incredible pain. The works of Jim Woodring and his silent comics that center around Frank, however, cater to that kind of attention span. I’m not sure if the stories ever follow a linear pattern or whether anything that happens to Frank can be considered logical or meaningful. The world that these stories showcase is one that is at all times chaotic, and at all times fascinating. Morals have no place, toads are the law makers (whatever those laws may be), and each character will have you cheering for them one second and disappointed in their behavior the next. For anyone who enjoys a bit of strange, these stories are most definitely for you.”

“Really, anything by Osamu Tezuka is worth your time. This is the one that stands out, only because it was the first thing he’d done that I had read. His storytelling is so relaxed and easy that you end up reading seven volumes worth of comics in a single sitting. This is his biography of Siddhartha Gautama from birth to enlightenment, and it is compelling through and through. I’m not and never have been that great at reading up on historical figures, but this one was easy to get through and it led me into my mild obsession with collecting everything that Tezuka had ever done. It’s an obsession that still goes on today, and I’ve loved every bit of it.”

The Voyeurs by Gabrielle Bell

“Autobio comics are the ones that come to mind quickest whenever someone mentions ‘alternative comics.’ Some sad artist in snow, thinking about their relationship that just ended and how they’ll never get past it. It’s not just that, but that seems to be the aspect of it everyone likes to bring up. Jeffrey Brown, Liz Prince, Julia Wertz, so many others that just felt the need to share their daily life with a reader, no matter how mundane or embarrassing it may be. The book that I probably think of the most from the [genre of] autobiographical comics is this one by Gabrielle Bell. All these stories have an indifference to them that I relate to still, to this day. It’s as if anything big or small that happens to you in life should be treated with the same importance as getting your daily coffee from your favorite coffee shop.”

“I have a Hellboy tattoo, because I love Hellboy and at twenty, I wasn’t the most forward-thinking person. If I would have to pick one story where big red affected me the most, then it would have to be Wake the Devil. Of course everyone should start with Seed of Destruction, which is the first volume, but this is the arc where you finally get to hide in those dark panels by Mignola. Without a co-writer to weigh down the panels in words, you have instead shadow, and maybe Hellboy saying one word out of frustration before he falls into a new insane fight with whatever monster Mignola could muster. When I look back, this is where Hellboy starts for me.”

“The Hernandez brothers were always really daunting to me when I started reading comics, because there’s just so much! When I finally did [read their work], I found that I leaned more towards Gilbert’s cast of characters in the fictional town of Palomar. As you read all the tales that take place in this somewhat dysfunctional town, you start to have a connection with each one of the characters, to the point that you will probably end up reading over thirty years worth of Love and Rockets comics. If you get bored with whatever’s happening in your life, I always found Palomar to be a good place to escape to.”

With that, we bid you a fond farewell to this week’s column. Happy Holidays, and until next time, comic fans.

Top Image: from The Voyeurs, by Gabrielle Bell