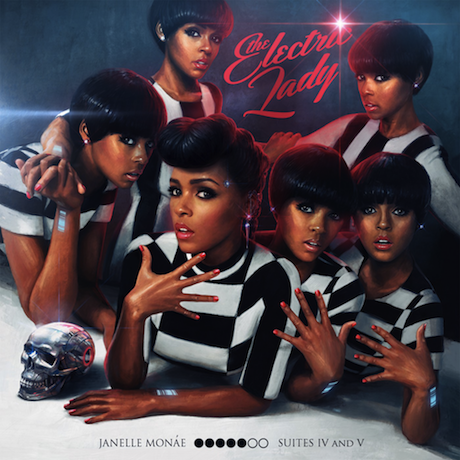 “There was a lot of confusion and nonsense where I grew up, so I reacted by creating my own little world … I began to see how music could change lives, and I began to dream about a world where every day was like anime and Broadway, where music fell from the sky and anything could happen,” wrote Janelle Monae in her Atlantic Records biography.

After Monae graduated from high school, she went to New York to study drama at the American Musical and Dramatic Academy. In 2001, Monae moved to Atlanta, Georgia where she me Big Boi, acclaimed rapper and half of the group Outkast. After meeting, Monae formed the Wondaland Arts Society, a community of like-minded individuals who “survive off funk”. Five short years later after Big Boi told Sean Combs about Janelle Monae’s talent, Monae was signed to Bad Boy’s record label.

In the conceptual album The Electric Lady, we are taken through suites IV and V of the Metropolis Saga with a unique blend of funk, soul and R&B. The Electric Lady’s story is a prequel to ArchAndroid (Suites II and III), Janelle Monae’s second album (parts II and III in the Metropolis Saga, begun on her debut EP, Metropolis Suite I: The Chase). On that album, Monae told the story of time-traveling android Cindi Mayweather’s love for a human, which eventually led to her being disassembled.

On The Electric Lady, Monae rewinds the timeline a bit, explaining how Cindi Mayweather first got herself into trouble. Monae sings of respectability, politics, love and equality, amongst other things. In an interview with Sound Savvy World, she discusses her inspiration behind The Electric Lady and how she came up with the title of the album. “I have a root of soul and R&B and what I wanted to with The Electric Lady–one, I did not want to recreate the ArchAndroid or any of my work. I find it to be kind of boring and repetitive, and just not honest. And so, with The Electric Lady I wanted to be exploratory in R&B and I wanted to really do something that showcased the diversity of our music.”

Later in the interview, she spoke about her inspiration for The Electric Lady, and where the album is conceptually. “The Electric Lady was really inspired by my paintings. And I wanted—I was singing and painting at the same time as I was out on tour, and I didn’t quite understand why I was creating this female silhouette over and over again each night. That’s what I was painting. And so, I ended up naming the series ‘The Electric Lady’. I had a hard time though, because no words were really coming to me. I knew during that time, okay, this series is something like, you can’t marginalize this woman, whoever she is.”

The album features 19 exquisite songs with flawless transitions between them. Featured guest artists include Prince, Erykah Badu, Solange, Miguel, and Esperanza Spalding. “Suite IV Electric Overture” is a great introduction to the album. Clearly influenced by Western Film, it sets the tone for the rest of Suite IV and the album by stating that this Electric Lady will no longer be a slave to society and the only thing she wants to bring is love.

“Givin Em What They Love” (featuring Prince) – Janelle Monae has always been a fan of Prince but the two of them together on this funk track is amazing. It talks about how she will not be held back from her mission. Prince adds a very special flare to this horn-heavy song.

“Q.U.E.E.N” (featuring Erykah Badu) – This song is a womanist anthem. Monae delves into respectability politics. Erykah Badu is the (conceptual) co-leader of the movement. Monae raps at the end about how she will not be quiet about the stealing of her rights. One of the best songs on the album.

“Electric Lady” (featuring Solange) – This song has Go-Go mixed with funk. Monae and Solange sing about the wonders of the Electric Lady and her undeniable freedom as a woman.

“Good Morning Midnight” (Interlude) – Radio DJ Crash Crash takes some call from droids who are supportive of the “Droid Rebel Alliance,” but with different opinions on the course of action. Fun interlude.

“Primetime” (featuring Mguel) – This song is sexy; the deep bass, the guitar, the tone of the song. There are more traditional R&B elements to this song in contrast to the previous funk-heavy songs. Miguel adds a special kind of sexy to this song. The guitar solo at the end has an intro, climax and fall-off, then rolls gently back into the music as Monae and Miguel harmonize together—a metaphor for love-making.

“We Were Rock & Roll” – As hinted by the name, this song is a rock & roll song about the Electric Lady recalling a wild young love she once had in the midst of a rebellion.

“The Chrome Shoppe” (Interlude) – DJ Crash Crash returns from a new location—the Chrome Shoppe, a place where the androids get their chrome shined. Funniest Interlude of the album. He then talks about an apocalyptic party thrown by the android sorority “ Electrified Betas.” Great transition into the next song.

“Dance Apocalyptic” – This 70s inspired dance song is about people dancing in the midst of an apocalypse and the bounty hunters for the rebellious droids and enjoying themselves. There are deep lyrics in this song past the fun music.

“Look Into My Eyes” – This song is asking for the listener to look into her eyes and see the potential of what they could possibly be and the future of which she has planned for them.

“It’s Code” – This song is 70s/80s R&B heavy and contain the same kind of harmonies and background is that of the Jackson 5 and the later years of The Temptations, The story is that of a woman who was scared to fall in love and eventually push her lover into someone else’s arms.

“Ghetto Woman” – Monae took a word that is normally used to belittle someone into a praise anthem. It talks about the misunderstanding of the “ghetto woman”—the woman who works hard, constantly portrayed negatively, who is talked about and consistently misunderstood. The song ends with a personal rap about Janelle Monae’s mother, the inspiration for the song.

“Victory” – This song has hints of Lauryn Hill vocally and musically. This song talks about Cindi Mayweather being willing to die for her human love. This song and its lyrics are beautiful.

“Can’t Live Without Your Love” – This smooth R&B track with classical elements tells the pain that Cindi Mayweather goes through living without her love.

“Sally Ride” – This song is brilliant and emotional. There are Negro spiritual elements in this song that bring the pain out of the lyrics.

“Dorothy Dandridge Eyes” (featuring Esperanza Spalding) – Spalding’s voice and Monae’s voice together produce a special kind of magic. They compare the unearthly beauty of The Electric Lady to the stunning Dorothy Dandridge, an African-American singer and actress. Spalding adds a beautiful scat in the song.

“What an Experience” – A beautiful, upbeat way to end the album—like a cinematic 80s love song that ends with reggae tones. The song also has Lauryn Hill inspired vocals. The song refers to the experience of the love that Cindi Mayweather has felt. The entire album was a thought-provoking experience.

Pick up a copy of Janelle Monae’s album “The Electric Lady” at Target for extra bonus tracks or on iTunes.