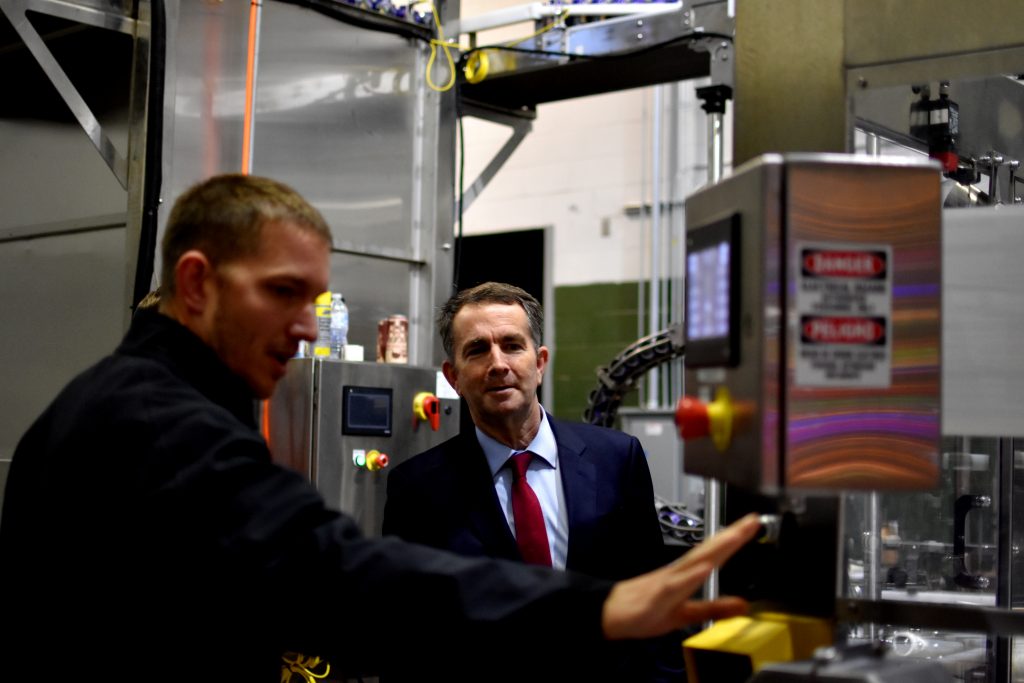 Governor-Elect Ralph Northam might have a new favorite beer. The incoming governor tried a few brews after touring Ashland’s Center of the Universe Brewing last night with owners Chris and Phil Ray. The brothers announced InaugurALE, the official beer of the inauguration they brewed in collaboration with the governor, which will be released Jan 13.

“InaugurALE is going to be my favorite beer,” Northam predicted, “but I like everything made in Virginia.”

Northam met the Rays at an oyster fest last month with his chief of staff, Clark Mercer, who lives near the Ashland brewery. Making a beer with ingredients grown in the Commonwealth was the top priority for the three, Chris said.

“We wanted to let the local terroir takeover,” said Phil, after his brother detailed the ingredient list. The all-Virginia production includes grain from the Northern Neck, malted in Sperryville by Copper Fox, Virginia-grown hops, and a yeast strain captured at Agriberry Farm in Hanover by Professor Grace Lim-Fong’s biology students at Randolph Macon, who cultivated the strain in collaboration with COTU.

Chris described the beer as light, with complex flavors, and a low alcohol content. Samples won’t be available until the day of the inauguration, but he offered Northam, his staff, and this reporter a beer of our choice from the taproom menu for an impromptu tasting.

After selecting a lighter Kölsch-style beer, Northam talked about priorities and challenges for the upcoming year. “The opioid crisis is our number one challenge. Last year, we lost over 1,400 Virginians,” he said when asked about his goals.

He also talked about bipartisanship and reaffirmed his commitment to expanding Medicaid, despite rumors to the contrary, and offered that beer could help unite political opponents.

“Terry [McAuliffe] is leaving the kegerator,” he said, referring to the craft beer setup installed by outgoing Gov. McAuliffe as part of the campaign that brought Stone Brewing to Richmond. McAuliffe will keep his commemorative handle, but Northam already has plans for its replacement. “Maybe I’ll get one in the shape of the Eastern Shore.”

Like his predecessor, Northam was all-in for craft breweries. “We’re so proud of folks like Chris and Phil. They employ 22 people in good jobs with quality wages,” he said. “Small business and startups are the backbone of our economy.”

When pressed to pick a favorite beer out of the ones he’d tried, Northam signaled a shift. “I’m more used to this type of beer, but I’m ready to convert after trying that,” he said, impressed by a sip of my doppelbock. It prompted a follow-up question: Out of 206 breweries in the state, whose beer does he think he’ll stock in the keg?

“I’ll just have to visit all the breweries and sample them.”