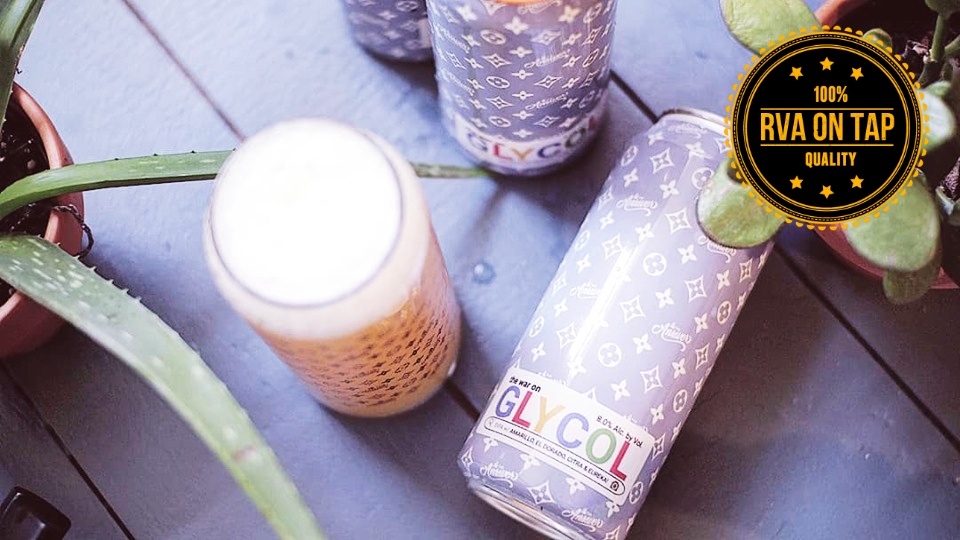 This week, we’ve got tons more great events to keep you occupied in the spirit of summer, plus new releases from our favorites like The Answer Brewpub and more. Don’t miss the annual BrewHaHa Festival, the Red Paint International Craft Beer Weekend celebrations in RVA, and an awesome Gose Fest with Center of the Universe. Drink up!

Before we dive into the many events of the week, let’s start with an especially-good new release and some info on its breed. The Answer Brewpub just dropped The War on Glycol last night out at the brewery, and it looks awesome.

Brewed with Amarillo, El Dorado, Citra, and Eureka hops, The War on Glycol is a Double-Dry-Hopped (DDH) Double IPA.

We’ve talked about a lot of DDH releases over the last year or so, but for the non-brewers out there, here’s a bit of info on that: the Double-Dry-Hop process is different everywhere you go. It can either mean brewers went through the hop process, then re-did it a second time to make it a double, or it can mean they added double the amount of hops that they normally would to the first single-processed beer. Either way, you’re in for something hoppy — it just might mean you’ll get a larger amount at some breweries than at others. But you’re also in for more flavor, because the late addition of hops is already where you’ll find a good chunk of your flavor, and the late-late-addition of hops is where your brewer is packing it in for that “explosive” flavor we’ve seen more and more of lately (and trust me, it’s a good thing).

Depending on the specific beer and the brewing process of that beer, the pour in your glass could have began in a barrel with four pounds of hops, six pounds of hops, or even nine pounds of hops. So next time you head to Kroger at 10pm on a Tuesday for a build-your-own six pack because you’re craving some new tastes for your nighttime porch hangs, you’ll know what that DDH on the side of the can means (and why so many people are gravitating to try them).

While you may not find The War on Glycol DIPA DDH at Kroger, you should definitely swing by The Answer for a case of cans to try it: in its true fruity fashion, this brew has big aromas of apricot and pomelo to complement its creamy, refreshing feel. Show The Answer some love and head over to grab one while you can — as we all know, these beloved (and award-winning how many times now?) brewers are known for cooking up recipes that can go quick once they’re out, because everyone wants a taste.

International Craft Beer Weekend is alive in Richmond! This weekend, Red Paint RVA is throwing their first annual event, with a series of contests and beer features around Richmond to celebrate. Some of our favorites like Intermission Beer Company, Vasen Brewing, Fine Creek Brewing Company, Three Notch’d RVA Collab House, Garden Grove Brewing & more will all be out for the occasion, with special beers lined up for enthusiasts like ourselves to vote on our favorites.

Richmond’s brewers are no strangers to the national scene, and the culture around it here is getting its own event to commemorate it. Red Paint themselves are collaborating on a beer with Three Notch’d for the occasion, and we’ll make sure to give that one a try.

Across town, you’ll be able to try the stellar brews that everyone is voting on all week long — and when you’re ready to vote for your favorite, just head over to redpaintva.com, search for the brewery of your choice, and click “like” on their profile to cast your vote. It’s going to be a hard call between all of these for me, but I’m thinking Fine Creek will probably take my vote. We’ll just have to wait and see!

Our favorite local beer podcast is back, and they’re recording their next episode live at The Dark Room this coming Sunday. Booze Clues, the live comedy podcast by Geeks Under The Influence that looks into hilarious recent headlines in the news, has their most recent episode available here, in case you haven’t had a chance to check it out yet.

Dissecting the most spirited headlines of drunken debauchery around the world, our host, Mike “Hobbit” Bickett, along with a group of comedians, podcasters, and performers, will dive into the most ridiculous things people have been caught doing after a good night of boozing. It’s free, so if you’re looking for something to spice up your Sunday night, they’ve got you covered.

The Answer isn’t the only local spot that had a killer release last night: The Veil Brewing Co. just dropped their new Soft Block DIPA brew.

The Veil has recently taken part in a lot of great collaborations. This is likely due to their reputation growing ever bigger and ever better across the beer scene, and drawing in other eager brewers to team up and create something awesome together. Soft Block DIPA is the creation of the hands of The Veil and Other Half Brewing Company, and it has the awesome creamy, orange color I’m always looking for. Can you tell I have a type? Yeah, that’s 1000000% it.

This delicious beer is a Double IPA, brewed with raw wheat, malted oats, milk sugar (!!), vanilla freeze-dried ice cream (!!!!!), oranges, vanilla, and Mosaic hops. Wow. I absolutely need it. If anyone’s in the market to treat ya girl this week, you know what to do.

Soft Block DIPA also hits in at 8% ABV, so a few will go a long way when you sit down to hang at the brewery — but get those Ubers ready, y’all, because you’re going to want more than one.

It’s Gose season in the beer world, and Center of the Universe is here to celebrate it. With another great event coming up this week, our buds at COTU are hosting Gose Fest this Saturday, and they’ve got plenty of entertainment to keep you going.

They’ll be releasing There Gose Summer, a traditional German-style Sour Ale brewed with “heaps of tangerine” and a dash of salt to make the perfect Gose. This one is slightly tart, according to the brewers, and a refreshing brew that will make “the agony of a diminishing summer” a little less dreadful, and a little more flavorful.

There Gose Summer is also being released with seven different variants to cater to all flavor profiles, so we’re sure there’s one for you. Check out COTU’s homage to summer at the brewery over the weekend, and if you make it out on Saturday, you’ll get to pair it with awesome eats from Freekin’ Rican and live music from Flashlight Tag.

Over at Intermission Beer Company, a real beast of a beer is brewing, and it’s our favorite mythical creature.

Centaur Bard is a West-Coast style IPA that was created with some really dank hops, like Simcoe, Cascade, Chinook, and Amarillo, before its dry-hopping process to really boost out the flavor. It was hopped over a 90-minute boil, and you’ll catch some great citrus flavors in this one.

“If you crave hops, the Bard obliges,” they say. “Ney, the Bard delivers!”

In more events this week, BrewHaHa is back at the Virginia Museum of History & Culture on Saturday. This year is their 3rd annual festival celebrating Virginia Craft Beer Month, and it’s going to be full of our favorite local brewers.

Catch places like Starr Hill Brewery (one of my personal favorites — have you tried their maple beer?! Be on the lookout for it this fall), O’Connor Brewing Co., Hardywood Park Craft Brewery, Blue Bee Cider, Ardent, Devil’s Backbone (my first love of craft beer), Midnight Brewery, Isley Brewing Company, and Kindred Spirit Brewing.

Head over here for tickets, and get ready for a day of live music, food, and a popular VIP portion called Battle of the Brews: showcasing local Virginia brewers’ renditions of a historic beer recipe from the museum’s collections. And as the museum says, you won’t want to miss this chance to “sip history.”

Highpoint DIPA has returned to Ardent Craft Ales, and the cans look as good as it tastes. This is one of Ardent’s newest DIPAs, and through its triple-dry-hop process, you can expect big hoppiness and big flavor out of this one.

Galaxy, Citra, and El Dorado hops made this brew come to life, and its house yeast blend finishes clean to allow the hops to shine, according to the brewers. You’ll catch flavors of tropical fruits, plus pear and citrus, in this new recipe made for the hazy DIPA lovers (like myself) out there.

Yuuuum, Fine Creek Brewing served up something special over the weekend. This Belgian Wit with Elderflower & Chamomile hits in at a soft 5.7% for easy drinking, and it’s the product of teamwork on the farm.

As the coalescence of the Fine Creek team’s hard work, this beer had hands from elderflower gatherers to the garden team growing, hanging, and drying its chamomile, and off to the brewers who cooked it all up in the end. You’ll catch flavors from Virginia Pils and Soft Winter Wheat malts from the Murphy & Rude Malting Co., plus water-cracker notes and a creamy body.

The elderflower is dominant on the nose, Fine Creek says, and the chamomile comes out in its taste. This beer’s soft, floral character melts into its citrusy tastes to complement both halves of its flavor profile.