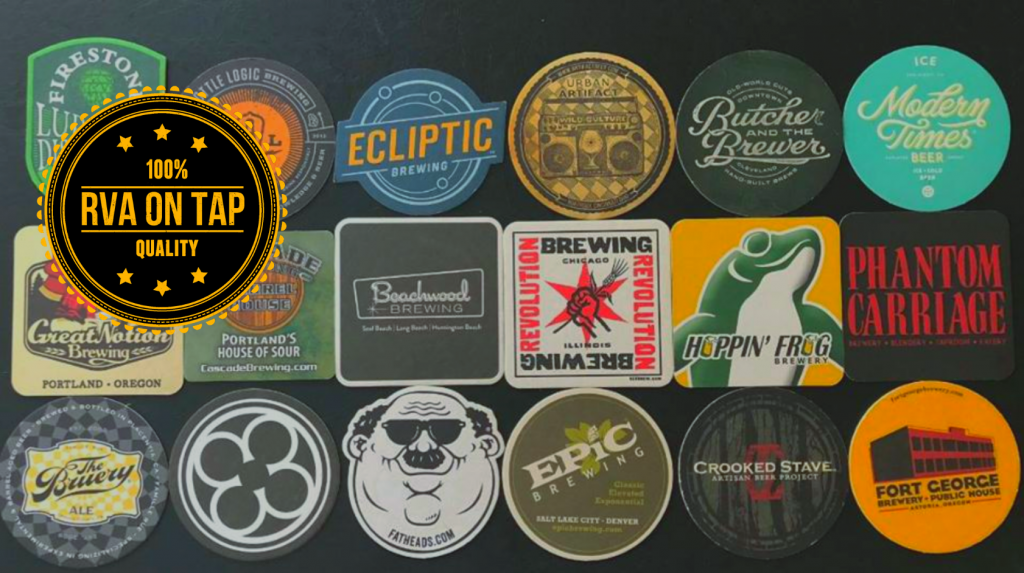 Last week, we checked out a few awesome beer events and even found a boozy haunted house for Halloween. We’ve got even more exciting stuff coming up, and RVA made the news once again for being one of America’s top beer destinations (surprise, surprise).

This week, Richmond was named the “Ultimate craft beer destination in Southeast America” by The Beer Travel Guide, with a note that good ol’ RVA has the best craft beer east of the Mississippi (can’t argue with that). According to the travel guide, we not only have a rich number of breweries, but also have some of the nation’s most elite right here in the city limits. They report:

“Any serious beer trader has a few Richmond breweries on his or her ‘In Search Of’ list. One could easily spend a weekend in Richmond doing nothing but drink craft beer and *still* feel like there wasn’t enough time to get everything done.”

Ain’t that the truth. Since RVA is just so-damn-great, we actually get two parts to our chunk of the country’s guide, all to ourselves. They released Part 1 this week, and some of our favorites made the list.

Final Gravity Brewing Company came in at #3 for its world-class IPAs (with The Doppler Effect recently ranking as the 12th-best IPA in the country). Up next was The Answer Brewpub at #2, where the travel guide remarked, “If the question is ‘Where can you find some of the best beer in the country?’ the answer is…well, The Answer.” #1 on the list is the entire neighborhood of Scott’s Addition (lol) and honestly, they’re totally right.

I’ve been saying forever that RVA is one of the most unique beer cities for its ability to go brewery-hopping (Seriously, where else is that a thing?) and our friends at The Beer Travel Guide found the same to be true.

Speaking of Scott’s Addition, one of the neighborhood’s best beer events of the year is next! weekend!

Once in a blue moon, we get an opportunity for the whole city to day-drink together, and nobody gets to judge us for it. Richmond’s self-proclaimed Booziest Neighborhood has brought that opportunity back this Saturday, for a full day of adult Trick-Or-Treating in the Scott’s Addition Halloween Booz Crawl.

The crawl this weekend hits 10 different spots in a day, full of beers, ciders, meads, and whiskeys. On your way, make sure to pick up Booz Crawl cards anywhere that’s participating. If you get three unique stamps, you’re entered to win a $25 gift card for each location.

Party time! Excellent!  Yesterday, The Veil Brewing Co. brought Crucial Taunt back at the taproom, and it won’t last long. Straight from Wayne’s World, Crucial Taunt is Wayne’s girlfriend Cassandra’s band, known for their impressive Jimi Hendrix and “Ballroom Blitz” covers that really jam. The New England-style double IPA is extremely hoppy, dank, and has a low bitterness to accompany its juicy, small-malt taste. As a longtime WW fan, I’m extra stoked on this one — and the brewers have warned it may be gone by Thursday, so hop on it, Richmond.

Castleburg Brewery dropped their Above the Salt Gose this week on a berry-blend randall. The Leipzig-style brew is light and tart, and according to Castleburg, it’s the perfect poolside drink as a 50 percent wheat beer that’s crisp and refreshing. It’s Castleburg’s first sour beer, and it hits at a nice medium with a 4.7 ABV. A reminder from the brewers: “Just don’t call us Salt Bae.”

The first full-time brewed and bottled West coast double IPA on the planet is back at Stone Brewing. Ruination 2.0 is the second round of the groundbreaking pale ale, dry-hopped and hop-bursted to get “every last drop of piney, citrusy, tropical essence” that gives this beer its character. It’s also the second stanza in the brewery’s Liquid Poem to the Glory of the Hop.

Stone’s also got their Bikes and Beers event coming up this Saturday for all the athletes out there. Gear up for 15- and 30-mile rides leaving the brewery (rest stops included, thank god) and circle back to Stone to get a glass, koozie, and two free beers! It’s similar to Hardywood’s motorcycle event last weekend, but for analog motorcycles (bicycles), and it’s got a raffle just the same. If you participate in the ride, you get a free raffle ticket — and if you’re anything like me, you might have so much fun you win back your own day-beer lost-belongings in the raffle.

Proceeds go to Bike Walk RVA to improve cycling conditions in RVA, so even if you don’t ride, swing by for a beer and make sure to check this one out!

Out in Midlothian, Steam Bell Beer Works just brought back Dueling Hops. The American-style IPA, brewed with Mosaic and Amarillo hops, has notes of mango and stone fruit for an easy-drinking fruit bomb.

The brewery’s also a stop on the Richmond Beer Trail (with more than 30 craft breweries — no wonder we’re top in the country). Pick up a map and hit five RVA breweries for stamps, and get one of these sweet trucker hats fo’ free!

In more new-beer news this week, the cold weather is back, and so is stout season! Swing by Ardent tomorrow for the release of their Imperial Milk Stout. This bold, rich chocolatey-sweet stout is balanced with a roasty base and has a silky smooth finish — unlike “the boozy burn” that often comes with a 10 percent brew like this.