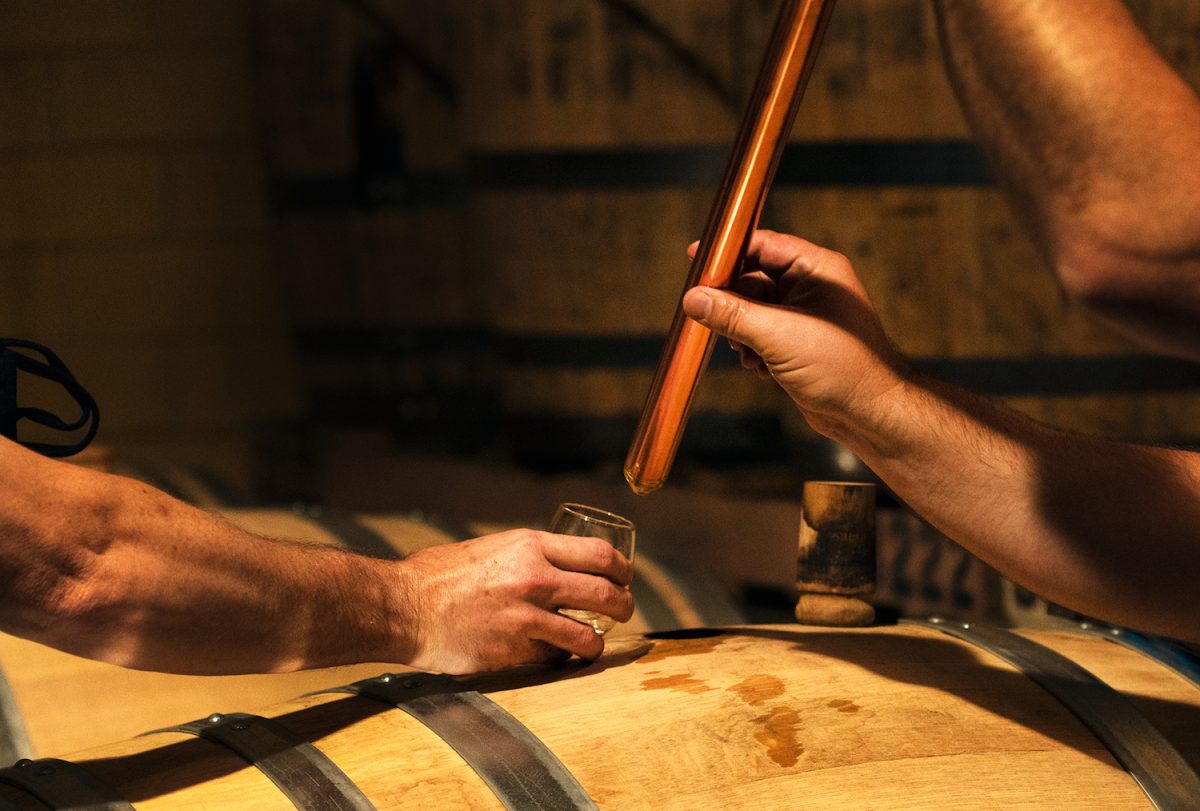 A visit to Virginia’s oldest whisky makers, Fredericksburg’s A. Smith Bowman Distillery, offers an opportunity to learn all about the history of whisky in Virginia, and to try some really delicious creations from right here in the Commonwealth. RVA Mag’s John Reinhold tells you all about it.

Last week RVA took a trip to Fredericksburg to visit the oldest whisky makers in Virginia: A. Smith Bowman Distillery.  We had gotten a press release about their new Cask strength 10-year bourbon. It peaked my interest and I thought, well, I know a decent amount about beer, but not a whole lot about bourbon and how it’s actually made. I know I like it, and I definitely want to know its history in Virginia. So we got in touch, and took a trip up to Fredericksburg to meet the crew and get a tour.  We hope to visit more whisky makers in Virginia and share both the history and craft of our local liquor culture in Virginia.

Bowman’s facility is located in Fredericksburg, beside Deep Run Creek, right off the Rappahannock River. The big complex has a nice picnic area right outside of the creek. The big brick complex is really immense — it looks and feels Willy Wonka-like to me.  I’m feeling that golden ticket vibe.

We came in the doors and pretty much immediately met with the fresh charred oak staves bourbon smells. Carrie Browning was our tour guide; she met up with us and got us comfortable and ready for the tour coming up. Looking around, we spotted a familiar face: Mac McCormack (of McCormack’s Big Whisky Grill, etc), who was there for some special tastings. I’m pretty sure he got the good stuff: straight from barrel selects. You know if Mac’s there, then you’re in good company on whisky.

I was able to pull Carrie over to the side to get a little more background information about the history of A. Smith Bowman. Abraham Bowman was founder of the family business. He fought in the Revolutionary War and started a transportation business with milk, as well as a granary. A. Smith Bowman’s family settled in Kentucky eventually moving to Virginia and landing in the Reston area. In 1935, after Prohibition ended, the family started The Virginia Gentlemen as a mainstay bourbon made exclusively in Virginia.  Between 1934 and the 50s, Bowman’s was the only legal whiskey distillery in the Commonwealth of Virginia. In the 80’s, they started plans to move to Fredericksburg, eventually completing this move by 1988. They still produce The Virginia Gentleman in a  connection to their past, though bottling is now done at a separate facility in Maryland. At the Fredericksburg distillery, they focus on the premium spirits. The current recipe is based on A. Smith Bowman’s recipe, and was updated to be produced in the 80’s. Corn, rye and barley make up the base recipe, and the cooperage (barrels used) are from Cumberland, using white oak from Kentucky.

Carrie was great in getting me all the background information and answering all my questions as we started up the tour. As soon as we hit the first barrel room on the tour, we were immediately hit with the aged bourbon-barrel smells. I wish you could take the smell with you, or at least that they could offer it in some kind of air freshener. It hits you hard and feels like a warm hug. It was interesting to go from room to room with the various aged barrels and find that I could actually tell the difference. The brightness of the oak can change depending on where they are in the process.

Hitting the still room, you’re greeted by the huge pots and stills, which are quite steampunk-looking. This is the perfect area for your industrial band’s album cover photo. On the left were the huge “Mary” still and “George,” the newer and still. These are the awesome and huge stills that power this whole operation. We got to try the actual output from Mary — the clear liquid that will go into the barrels. It’s basically moonshine at that point. Which just points to how much the aging-barrel process adds to the making of bourbon. Before it’s barrelled, the whisky is 143 proof. Yep. The barreling proof eventually gets down to 125 or below. Mary runs two weeks on and two months off; they have timing down to an exact science on their scheduling for yield. George runs a little more for the specialty spirits. On George, you can see all the portholes that fill to tell you the exact proof that the batch will be. I would love to see this guy running in full steam; these stills are so huge and impressive. From here the mash goes to ferment, and then gets sent over to the barrels to begin the long process of ageing.

At this point in the tour, we met Brian Prewitt, who is the sixth master distiller in the History of A. Smith Bowman (aka The boss man). Brian started working within the brewing Industry at New Belgium and Great Divide, then went into the winery side and worked at Gallo. He learned more about the aging process through that. Eventually he fell into making spirits, which is what he’s done for the past 18 years. When asked why he switched to spirits, he said, “What drew me into spirits was the distillation process; being able to have a little more control of the overall flavor profile, to take something that has a certain note in the fermentation and then just resuscitate it.” They test the fermenting mixture about every six months, pulling from various lots to see where they are and how it is developing.

Around the corner, Brian took us to the holding tank where his award-winning Port Barrel is mixed. In 2017, after winning an award for their Isaac Bowman Port Barrel Finished Bourbon, they added it to the products they offer. This huge barrel never gets more than half empty to keep a consistent flavor profile for the port barrel offering. The port is from a Portuguese ruby port, while still blending in some Virginia port to keep it pure to style. I could see Brian’s love and pride for what he does as he took us through all of this. It’s amazing to think about the amount of waiting involved in making your creation available for people to try. Brian took us through the process for all these fine offerings, including some experiments on both bourbon and whisky using vanilla and oak. This is where I learned that all bourbon is whisky, but not all whisky is bourbon. Confused? Yeah, well, to be bourbon, whisky basically has to be in newly charred oak barrels and 51% corn.

We traveled through the facility to a few different areas of the distillery, exploring the various styles Bowman produces. Some of these areas are huge holding facilities that go on and on. Each spot has its own very particular wonderful aroma that I want to bottle and sell somehow. We ended up in the tasting room to finish our tour, and got to the best part: being able to taste these spirits. We went down the lineup of Bourbons, from Bowman Brothers, John J. Bowman Single Barrel, and the Isaac Bowman Port Barrel. All of them were, of course, amazing, with the Port and Single being the standouts. We also tried the Rum, Cane & Coffee, and the botanical gins. The botanical gins I actually found to be quite nice, even though I’m not a huge gin fan with the heavy juniper background. These used other types of botanicals to get their flavor, and I actually enjoyed that a lot more. My favorite so far was a surprise: the Mary Hite Bowman Caramel Cream Bourbon. This is one that I really loved and certainly like more than the Irish creams I have had.

After we’d done quite a bit of tasting, Brian came over and surprised us with a bottle of the Cask Strength 10-year release (which was only available by lottery). I have had a decent amount of various whiskys and bourbons over the years, and I have a decent palate for these big bourbons. This one actually blew me away. I know, here I am talking about the place, getting the tour and buying the ticket. But seriously — this one is something special. It felt like it washed over me, gave me straight-up chills. I have since tried to find it and can’t seem to get it in stores yet. Once I can, though, I can’t wait to revisit.

Overall, our trip to A. Smith Bowman Distillery was a great visit and tour, one I highly recommend to people interested in a pure Virginia offering. The people there at Bowman’s are passionate about what they do and happy to share their history and process. Oh, and you get to try some amazing bourbons to boot. Thank you to Carrie and Brian for taking the time to show us around personally and be so accommodating to us newbies.

Visit A. Smith Bowmans in Fredericksburg for your own tour and tasting.