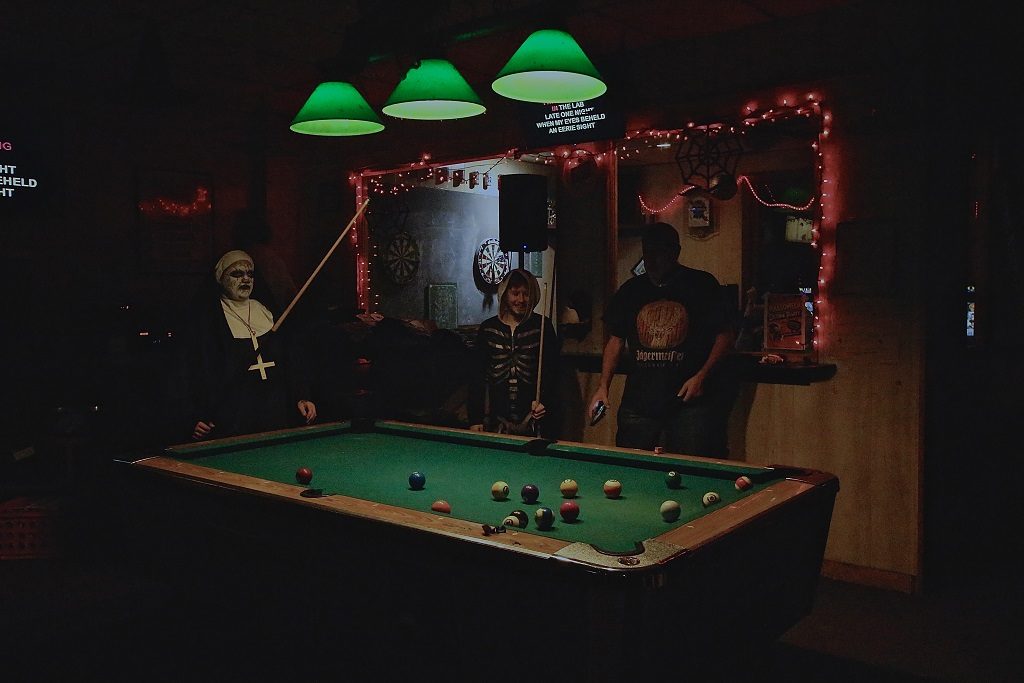 Old-school dive bars may seem like relics from another time in 2019, but in South Richmond, The Locker Room continues to thrive. In fact, the family is growing.

A human-sized cardboard pack of Juul Pods sang Cyndi Lauper’s “Time After Time” while a demonic nun smoked a cigarette and played a game of pool. Bernie Sanders belted out The Who’s “Baba O’Riley” and did some impromptu campaigning during the instrumental breaks. A “straight bachelorette,” dressed for her party in a robe and a sash, put an unexpected yet delightful screamo twist on Toby Keith’s “Courtesy of the Red, White And Blue.” Even the solo bartender, Austin Fitch, gave his best Anthony Kiedis impression in “Give It Away” from behind the bar, while sporting a skeleton suit and mask.

Wednesday, October 30 was like any other karaoke night at The Locker Room, but with one obvious exception: nearly everyone in the bar was in costume. It was a “scary-aoke” Halloween party, complete with a costume contest that awarded prizes for categories including scariest, which went to Bernie Sanders, and most MacGyver, bestowed upon the straight bachelorette.

Aside from some unconventional costumes and a collection of witch hats and spider webs for decoration, it was a typical night at the self-proclaimed, patron-confirmed “dive bar” in the Westover Hills neighborhood of South Richmond. The relatively small group of people, most of them regulars, were content to be shooting the shit over mugs of cheap draft beer and cigarettes as usual.

Yes, you can smoke inside at The Locker Room. It has all of the other hallmarks of an authentic “dive” too, making it one of the last left of a dying breed in Richmond. It’s located on the end of a small strip mall on Forest Hill Avenue, with an oddly charming interior that’s reminiscent of a public school built in the 60’s or 70’s: laminated wood-paneled walls, fiberglass ceiling tiles, and thin brown carpeting throughout.

The drinks are cheap, there’s almost always Jello shots in stock, and the food is not exactly worth mentioning. They’ve got a pool table, a jukebox, a dart room with several skill machines, and a few flatscreen TV’s — which are usually playing sports — for a touch of modernity. Even if you go there only semi-regularly, a good portion of the crowd on any given night will soon become familiar.

A tight-knit group of long-time regulars is the lifeblood of The Locker Room. Owner Lisa Ann Peters calls them “The Locker Room family.” There’s a story Peters tells about a regular coming in one day with the news that she was getting evicted. Everyone in the bar mobilized immediately, leaving their drinks behind, and went to help her move out. When a member of “the family” passes away, The Locker Room posts an obituary on their Facebook page. On a ledge above the row of low booths, there’s a collection of photographs memorializing some of The Locker Room’s most well-known and well-loved personalities throughout its 40 year history.

At the Halloween party on October 30, Victoria Carll accepted her prize for funniest costume as the Swedish Chef while standing across the room from a framed portrait of her late mother, Dottie Jensen, on the exact date that she passed away a year before. Jensen is a storied member of The Locker Room family, having worked as a bartender there for many years. Near her photo on the ledge, there’s a wine glass full of unlit cigarettes collected in her honor.

For members of The Locker Room family, it’s the bar where everybody knows their name. But while it does sound a bit like “Cheers,” this cozy, homey neighborhood haunt differs from the famous sitcom archetype in an important way: not everyone in the room is white. “A multiracial, working-class coalition” is how Wilson Nelms affectionately describes The Locker Room, his favorite bar. There’s a sign on the wall that reads “Not permitted here: racism of any kind. Homophobia.”

The patronage isn’t the only thing that’s a family affair–the legacy of ownership is too. Peters’ uncle Donald “Donny” Guza bought The Locker Room in 1979 and ran it with his sister Jean Jones, Peters’ mom, until his death in 2013. Jones died two years later, so Peters and her brother, Larry Pitts, took over in 2015. Then Pitts passed away unexpectedly in June of 2018, leaving Peters as the sole owner. However, she’s proven herself to be quite enterprising in the short time since the bar became hers.

Peters added a dart room and weekly trivia and karaoke nights to the list of things that The Locker Room has going for it. Since her ownership began, social media accounts for the bar have been created on Facebook, Twitter, and Instagram, which are used for posting about events and sharing a reasonable amount of memes.

Last November, Peters and her husband opened The Pitts on Broad Rock Boulevard, also south of the river, which is known as The Locker Room’s “sister dive.” Named for her late brother, it’s a burger/barbecue joint that serves breakfast all day and has a fenced-in, sandy outdoor lounge area with cornhole and patio tables; it’s the kind of thing you’d find at a bar in a sleepy beach town.

As the gentrification process that has already taken hold in Manchester spreads outward, the future of Richmond’s Southside is still unclear — but there is reason to speculate about it. Directly across from The Locker Room, two buildings are currently under construction that will house new locations for The Veil Brewing Co., Blanchard’s Coffee Roasting Co., and Charm School ice cream. Will the southern migration of popular businesses based north of the river bring new clientele to places like The Locker Room, or just drive up the rent with little reward? Only time will tell, but with a dedicated fan base that spans generations, it’s hard to imagine The Locker Room ceasing to exist.

Though newcomers at The Locker Room are probably less common than they are at most bars in Richmond, they’re met with the same unassuming, genuine attitude that greets any other patron. Everyone has their own reason for what initially brought them there, whether it was proximity, word of mouth, family tradition, or even the internet. One night there was a man there named Michael, who had recently moved to South Richmond from Michigan. He said he Googled “bars nearby” and The Locker Room looked cool, so there he was. Michael from Michigan said he’d definitely return.

Regardless of how they found the place, there are obvious common themes that keep people coming back. Kenny Miller, a young regular that lives within walking distance, said he goes to The Locker Room “to get drunk.” But watching him shuffle around the bar from conversation to conversation, talking and laughing with old friends and fellow regulars, it’s clear that there are motivations deeper than the surface-level initiative of getting a buzz without breaking the bank.

It’s not just the affordability that leads people to frequent The Locker Room. It also offers an appealling neighborly camaraderie and a laid-back, sincerely judgement-free atmosphere. If you don’t find cigarette smoke offensive and you’re in search of a bar in Richmond that is the antithesis of pretension, The Locker Room is that bar.

The Locker Room is located at 5035 Forest Hill Ave, and is open from 11 am until 2 am seven days a week.