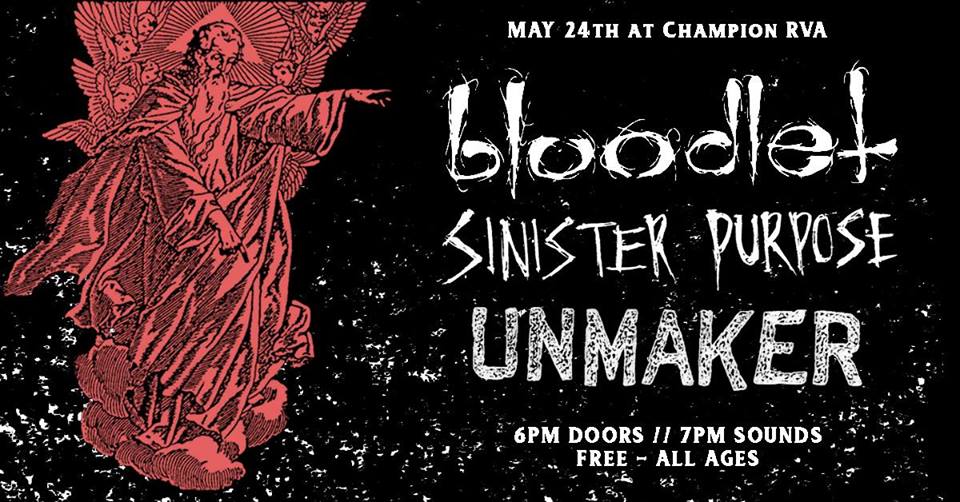 On the final FREE THURSDAY Music Series (at least until Fall), Champion Brewing Company RVA had to do it big as a humble thank you to those who have supported while we built up the room enough to host national talent. For this one we have Orlando metallic-hardcore/sludge veterans BLOODLET headlining with their ORIGINAL LINEUP! They put out four of the genre’s most diverse pioneering LPs between 1992-2002 covering grounds from goth to punk hardcore to sludge to experimental soundscapes and truly pushed the sound to levels it’d never been before. They’ll be accompanied by two RVA rulers who have also yet to play here including the rock and roll hardcore annihilation of SINISTER PURPOSE and the crushing-yet-soothing post-punk of UNMAKER!!

The rumors are true! After honing our sound and events in HARD since the end of last summer, Champion Brewing Company RVA will be stepping back from the FREE Thursday series for the summer. While there are plans to come back to doing them more after the vacation, the format may change BUT in the interim we’ll still host events put on by other local creatives and continue to support live music and VA music particularly. That said, we ain’t going nowhere and look forward to several Summer bookings, they just won’t be weekly or free. Thanks for the love for the 8 months of the series and stay tuned for the May 11th and 17th editions to be announced any day now! 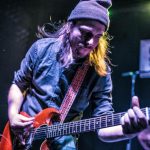 Join us for the first ever Mardi Gras Masquerade benefiting The Doorways! Let the good times roll on Friday, February 21 from 8:00pm-midnight at The Graduate Richmond. Your ticket price of $65 will include New Orleans drinks and bites. Enjoy southern nibbles like bbq...

Join us for the second Friday Happy Hour at City Stadium presented by the Richmond Kickers and the Carytown Farmers Market! From 5-8 pm, City Stadium will have live music, craft beer, food trucks, vendor tables, and Kickers merch! The event is socially distanced and...

An amazing multimedia artistic collaboration is being broadcast on Sunday May 16th at 8pm. Local indie Folk band Høly River performs in the historic Richmond Pump House alongside dancers from the Concert Ballet of Virginia and Starr Foster Dance.   The...

There’s Nothing Traditional About Blues Artist Diana Rein. Romanian Blood. Diana’s parents escaped communist Romania in 1981 when she was 3 years old. They arrived in Chicago, on Halloween with only $50 and a dream for a better life. Diana brought her family's strong...