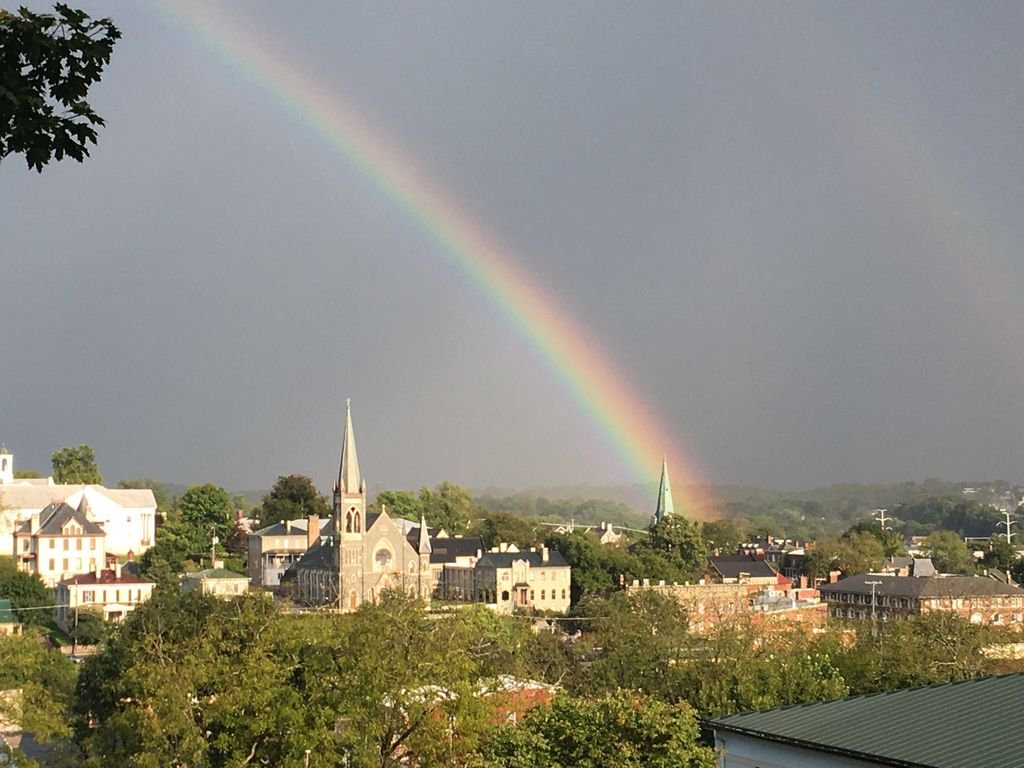 Our 2019 Summer Pride Guide, in collaboration with VA Pride, is out now! Here’s one of our articles from that magazine, in which we examine the rise of Pride festivities in smaller cities and towns around the Commonwealth.

If you had to put a Pride festival in any town across the Commonwealth of Virginia, Lynchburg is probably one of the last places you would pick. But for Michael Kittinger, it felt like the perfect place to host the LGBTQ celebration.

“Moving to Lynchburg ten years ago, one of the things I was worried about was, “Is there an LGBTQ community in Lynchburg?” he said.

But even with this organization operating locally, something was missing: a Pride event celebrating Lynchburg. “I knew several of the members of Spectrum Arts Society, and had just been talking to them,” said Kittinger. “They understood bringing pride to the Lynchburg community.” Thus, in the spring of 2019, Lynchburg held its first Pride festival, under the name Hill City Pride.

“When we first started planning this, one of our early meetings went over defining what success and failure look like,” he said. “We needed to know what those measurements would be, so that we would know how successful of a Pride [it would be].” Creating the goal of receiving 10 vendors and 500 attendees, Kittinger and his team set out to find sponsors.

“Being a first year start-up Pride, it’s hard to go out and solicit donor money, whether it’s from corporate or individuals, because they would want to know, ‘What kind of return am I going to get?’ And we didn’t have those numbers.”

Before he knew it, Kittinger had nearly 27 vendors waiting to join. He had to cap it there. And on the day of Hill City Pride, April 13, nearly 1600 people showed up. “I remember when the gates first opened and we let in those first people, I was almost in tears standing there,” he said. “There was a line out the door.”

Deep in the valley of Virginia, Kittinger was aware that there would be some backlash. A protester showed up on the day of Hill City Pride with signs in hand. A few joined him, but for the majority of the day, the man stood alone. Emcee and kickoff host Delighted Tobehere, a drag queen from New York City, greeted the crowd at the start. “I have three rules when it comes to protesters: ignore, ignore, ignore.”

Kittinger was thankful for her words. Volunteers and police officers urged the attendees away from interacting with the protester. But the weather took a turn in the festival’s favor. “It was more of a misty morning. The protester had painted all of his signs in water-soluble paint. It looked like the Wicked Witch of the West and he [was] just melting away. The sign just ran away, and it was almost a metaphor for what the event was: here we are in the community, and we’re blurring those lines of what a family looks like, what does acceptance look like, and getting rid of stereotypes.”

Tucked away in the Shenandoah Valley, Staunton boasts historical scenery, authentic Shakespeare at Blackfriars Playhouse, and a Harry Potter festival. Soon after the magical festival in September of 2018, Staunton hosted its first Pride, hosted by local technological research company LGBT Tech. Chris Wood, the Executive Director of LGBT Tech and the founder of Staunton Pride, knew Staunton would be a special place to host a Pride festival.

“We have the Prides in Harrisonburg, and that’s really meant to do the [Shenandoah] valley,” Wood said. “There was enough want here in the city and go ahead and warrant its own, [while] making sure we’re not doing it across other Prides.” Wood took into account the nearby Pride in Harrisonburg, as well as that of neighboring Charlottesville, and was given the green light to bring Pride to Staunton.

After coordinating with the city of Staunton, Staunton Pride ended up occupying most of the main downtown drag of Beverly Street, considered one of the most picturesque downtown areas in America. “We had a stage at the edge of Market and Beverley, the biggest stage that’s ever been put on Beverley Street,” said Wood. “It was huge. It rose well above the street lights.”

With the quintessential theme “Love Is Love,” Wood and his team set out to create what they thought was exactly what Staunton needed in a Pride festival: entertainment, vendors, safety, and community.

“We had vendors from people selling Pride-related things all the way to Augusta Health, and we were doing [HIV] testing on-site,” he said. In addition to the entertainment acts and the bustling celebration downtown, Wood and his team offered a warm room, a space for attendees to go unwind and seek mental health care if necessary.

“A lot of individuals, [including those who are] part of the LGBTQ community, get overwhelmed in events like that, or just can’t be around that many people,” said Wood. “So we want to make sure that they have space as well. We had therapists in there. It was a very quiet space.”

While most Prides can end up falling under the adult ratings, flowing with beverages and corporate representation, Wood and his team ensured that Staunton Pride would be local and approachable. “We tried to make sure that it was family-friendly, kid-friendly — that people could come and experience it in a safe, comfortable way regardless of how you wanted to experience it, and really invite the entire community out, and supporters.”

Wood never underestimated the presence of Staunton’s LGBTQ community. After moving to Staunton with his husband, he discovered through his family that there was a presence, a need, with the LGBTQ community. And Wood saw that void could be filled through a Pride.

“We’ve been working with the city really closely,” he said. “I wanted it to go off really well. I wanted to make sure that the city was happy with it, that the residents of the town were happy with it.”

With somewhere between 3,000 and 4,000 attendees, Wood felt good about the success of the first Pride festival in Staunton. “Although we kept our ears to the ground and we kept listening, I wasn’t really worried about people backlashing about it, being upset about it. We really had a lot of support from a lot of people, a lot of businesses.”

When asked about negative reactions, Wood laughed in response. “The police were so bored,” he said. According to the police captain, Wood said, everyone was respectful and courteous. The greatest emergency occurred when a swarm of bees infested a food cart. “All of the police were over there trying to help them out.” In regards to the sheer mundaneness of the activity, he said, “It was a really good problem to have.”

For larger metropolitan areas like Washington D.C. and Richmond, having a Pride festival allows for people to come out in droves to celebrate, dance, eat, drink, see and be seen by the community. For many, a small-town Pride doesn’t seem like it would generate that much interest. But both Wood and Kittinger could see the impacts of the Pride events in their cities.

Kittinger was approached by a mother of an eighth grader who identifies as gay. He was picked on, and felt out of place in such a small town. But once he heard about Hill City Pride, he begged his mom to allow him and his friends to attend.

“She brought them out, and she said, ‘It’s the first time he really felt like he was part of a community, and part of something bigger.’” Kittinger said if it can make a difference, an impact, even just on that one eighth grader, he feels that Hill City Pride is a success.

Wood can attest to the impact his city’s Pride has made on the community. “There was an older gentleman who came down with his husband from Silver Spring,” he explained. “I sat down with him at the picnic table, and he said, ‘I just had to come see it for myself. I just had to come see that Staunton was actually having a Pride.’ There were a lot of stories like that.”

Both organizers wanted their Prides to reflect their community in a personal way.

“You have your larger metropolitan areas that put on events, but, just like in the LGBTQ community, they don’t necessarily represent the face of what our residents look like, what our community looks like,” said Kittinger. “It really is important for communities of all sizes to have their own way to celebrate diversity and show that they are an inclusive community, even if it is a small town.”

“I think there can be a misconception that there’s just not gay people in the Shenandoah Valley,” said Wood. But, he said, he thinks there are way more than meets the eye. “For these types of towns to grow, you have to celebrate diversity, and you have to be willing to accept that it is a very diverse world, even more today than 50 years ago. Supporting [the] LGBTQ [community] is just one step in that for these towns.”

A Pride festival is not only a place to venture into the public eye unabashedly. It is a statement of presence and celebration. And while the question of whether or not holding a Pride event in a small town is “worth it” is often asked, it should be considered irrelevant in 2019. Through the conversations with Wood and Kittinger, it is unsurprisingly-evident that an LGBTQ community can exist, thrive, and flourish, even in the distant woods and mountains of Virginia. There is no area in the Commonwealth that’s too small or too rural to host a Pride.

Staunton Pride will be hosting several events over the course of this year, including a gala, but will host its next Pride festival in April 2020. “We think through it, and we make sure we’re growing slowly, and in a way that’s manageable,” said Wood. “It is about the community itself — it’s about the community supporting the community.”

Hill City Pride will host its second year in the spring of 2020. “I firmly believe that when you have a diverse and inclusive community, you bring together the best of people and people are allowed to be their authentic, true selves,” said Kittinger. “We’ve got to keep the train moving, and look toward the future.”

Get Ready to Stan Benét

The surge reported by the FBI, a 21 percent increase in the first three years of Donald Trump's presidency, was predictable, but that... READ MORE

In this month's installment of The Amazon Trail: as the vermin is slowly shooed from the halls of power, Lee Lynch finds her own house... READ MORE

Get Ready to Stan Benét

The surge reported by the FBI, a 21 percent increase in the first three years of Donald Trump's presidency, was predictable, but that... READ MORE

In this month's installment of The Amazon Trail: as the vermin is slowly shooed from the halls of power, Lee Lynch finds her own house... READ MORE